Technology (XLK, +0.54%) has been the leading sector over nearly every short-term performance measure.  Industry groups like internet ($DJUSNS), software ($DJUSSW), semiconductors ($DJUSSC) and electronic equipment ($DJUSAI) have all broken out and are performing exceptionally well vs. the S&P 500.  You can visualize this by reviewing the following chart:

While I've provided a number of warning signs about this rally, the above chart is not one of them.  On the S&P 500 breakout to all-time highs, these four technology industry groups have been leading the advance on a relative basis, either breaking relative downtrends or breaking to fresh relative highs.  This is the type of action that supports the idea of a sustainable bull market.

Nonfarm payrolls surged in July, far exceeding Wall Street consensus estimates.  Surprisingly, the reaction in both bond and stock markets have been tempered.  Dow Jones futures have jumped 92 points (as of 9am EST) and the 10 year treasury yield ($TNX) spiked four basis points to 1.54%, but neither are challenging recent highs and we have to stop and wonder why.

European markets are higher this morning, albeit fractionally, as both the German DAX ($DAX) and French CAC40 ($CAC) have failed thus far to clear short-term price resistance.  In Asia overnight, the Hong Kong Hang Seng index ($HSI) continues to outperform, rising 1.44%.  Meanwhile, the Tokyo Nikkei ($NIKK) remains well below its July highs as its chart flounders in a longer-term downtrend.  15000 remains very important price support there.

More than 500 companies reported quarterly results on Thursday, with priceline.com (PCLN) being a notable winner.  The reaction in PCLN shares (+5.59%) is likely to prompt a breakout in the travel & tourism index.  See the Sector/Industry Watch section below for more details.

From a price perspective, bulls are now awaiting the NASDAQ to join both the Dow Jones and S&P 500 in record territory and we're not too far from seeing that.  The NASDAQ's all-time closing high was set on July 20, 2015 at 5218.86.  We're a stone's throw away from that level after a huge rally that began right after Brexit in late June.  Take a look at the chart: 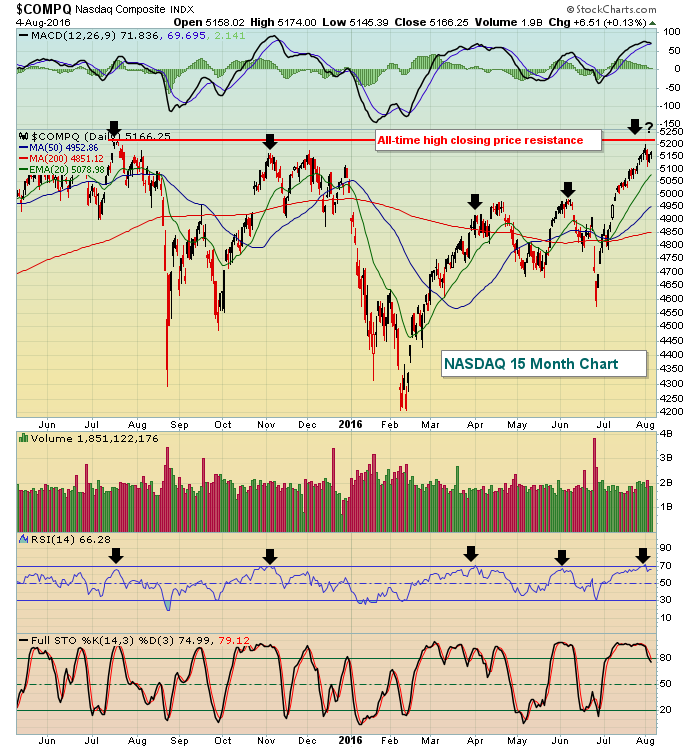 The biggest question for me at this point is can the NASDAQ make the breakout with very stretched momentum oscillators?  You can see from the black arrows above that an overbought RSI typically represents key price tops either at that time or very soon thereafter.

The Dow Jones U.S. Travel & Tourism Index ($DJUSTT) has been battling overhead price resistance for months.  It likely won't be battling it any more after today's open as PCLN posted strong results and will likely drive the DJUSTT through key resistance at the opening bell.  Here's the chart: 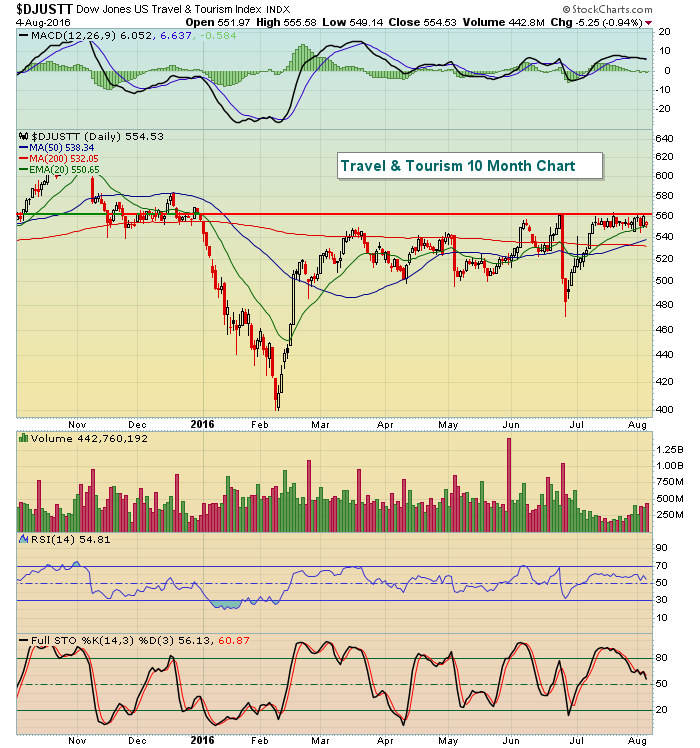 After an anticipated gap higher this morning, price support should reside near 560 and the rising 20 day EMA, currently at 551.

Since 1971, the NASDAQ has averaged nearly a 12% per year return.  Fridays, however, have been quite bullish with annualized returns of more than 25% over that same span.  In other words, the NASDAQ tends to perform twice as well on Fridays.  So in the stock market, TGIF truly means something.