Honestly, I'm not at all surprised at the failure on Tuesday for the bulls to capitalize on Monday's rally.  We had a lot of room to key short-term price resistance after Friday's free fall in our major indices.  The S&P 500 had price resistance near 2160 and the NASDAQ's price and gap resistance fell from just beneath 5200 (price resistance) to 5220 (gap resistance).  By Monday's close, we had reached both but had not broken above on the close.  That left us vulnerable to renewed selling and that's exactly what we saw.  Check this out: 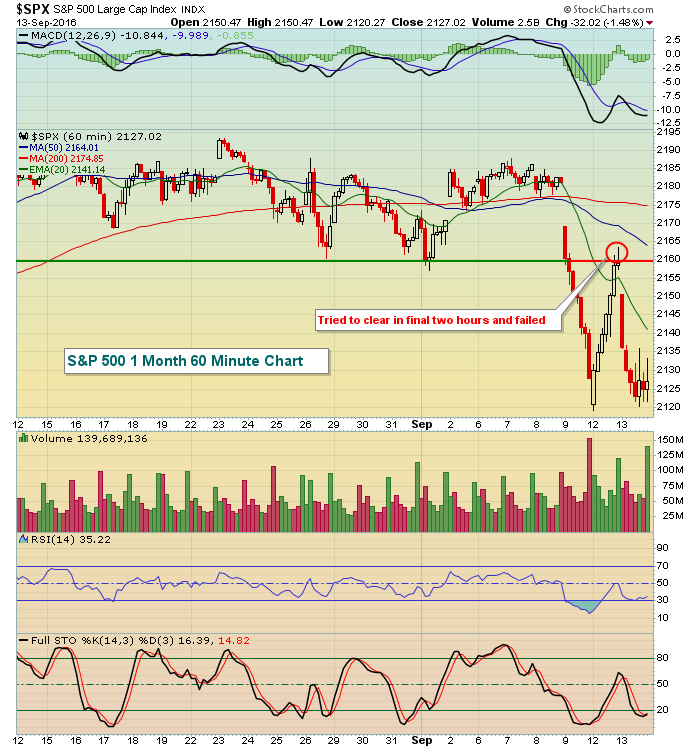 After Monday's failure at 2160, highlighted by the circle, the selling kicked right back in and prices dove back to Monday's low.  I had pointed out that would be the support to look for and thus far it's held.  Unfortunately, it didn't take long to get there.  This price low is not only important on the daily chart.  In the Current Outlook section below, I'll take a look at the weekly chart, which also suggests the bulls need to do some work.

All nine sectors moved higher on Monday.  All nine moved lower yesterday, led by energy (XLE, -2.86%).  September is a brutal month historically for coal ($DJUSCL) and yesterday this part of energy fell 8.62% in one session.  It's lost roughly 20% in the past five trading sessions.  Profit taking in the very bullish pipelines ($DJUSPL) space is also weighing on energy.  I'd look for pipelines to regain their strength very soon as the group is approaching key support as reflected below: 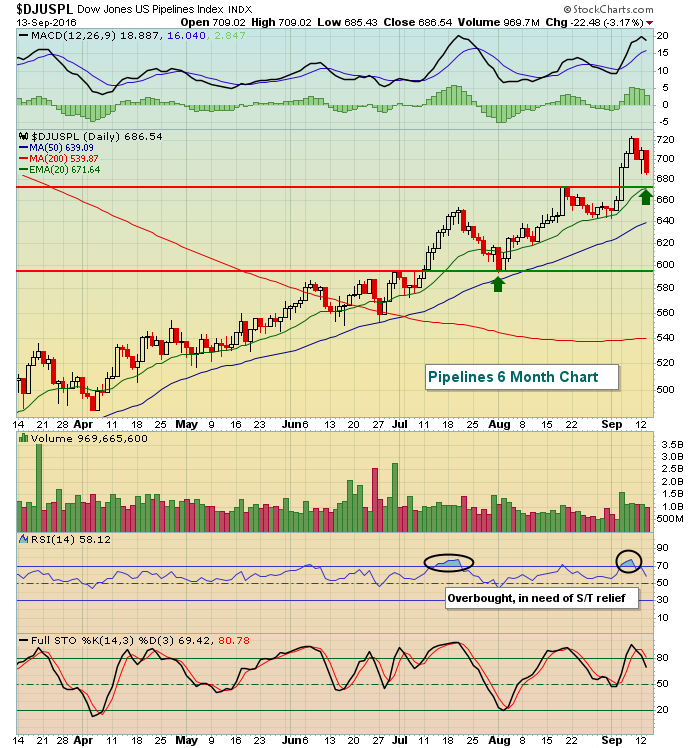 The setup here looks strikingly similar to the overbought conditions and profit taking that occurred back in July.  Both price and rising 20 day EMA support are at 675 and the close yesterday was 686 after the DJUSPL recently approached 725.

We are seeing slightly higher futures this morning as the Dow Jones futures have tacked on 28 points at last check.  In Germany this morning, the DAX is once again trying to negotiate its key price resistance zone in the 10450-10500 area.  Failure to move back above that zone is another warning for U.S. equities, so pay attention.

Crude oil ($WTIC) is down slightly, but does still remain in a potentially bullish reverse head & shoulders pattern.  It doesn't confirm until the WTIC breaks above $50-$51 per barrel, however.

We know the volatility index ($VIX) has accelerated and a rising VIX is a key ingredient to lower prices.  Market participants grow much more anxious and price swings begin to move wildly.  That's what we've seen the past few trading sessions.  It helps to soothe the anxiousness if key support levels hold.  On the S&P 500, 2131 was very significant price support as 2131 represented broken price resistance over the summer and became price support.  Also, during uptrends the rising 20 period EMA typically acts as solid support if the MACD is strong (ie, higher MACD highs with higher price action).  Below is a weekly chart - only one year of data is provided so key levels can be seen clearly: 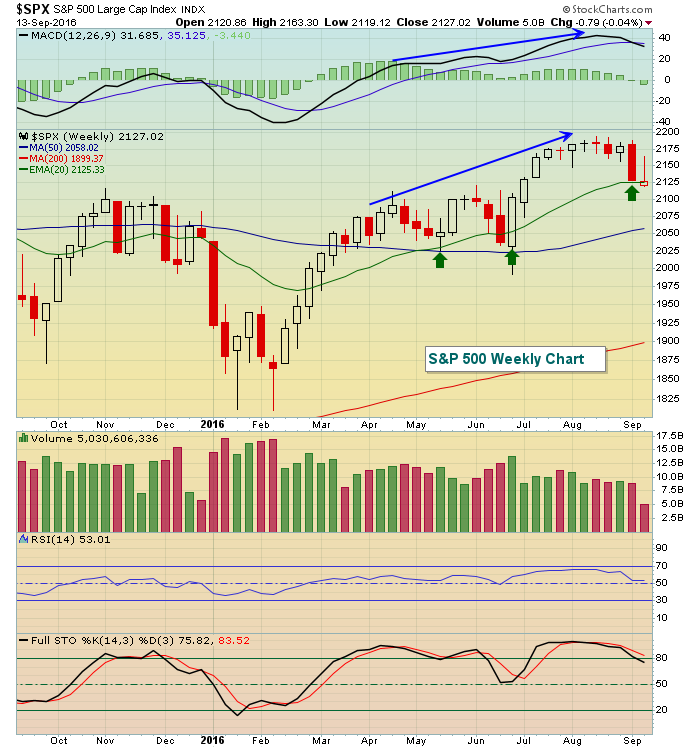 Note that the higher prices established in August were accompanied by a higher MACD.  That simply tells us that our shorter-term moving average (12 week EMA) continues to move up faster than our longer-term moving average (26 week EMA).  As mentioned above, as this occurs, the rising 20 week EMA tends to hold as support (see green arrows above).  It is important to see, however, that the MACD has rolled over significantly and another attempt at an all-time high would likely print a nasty weekly negative divergence and those can be brutal to unwind, even possibly marking the beginning of a bear market.  So based on what I'm seeing, technical indications suggest that we're heading lower, it's just a matter of whether it's now or after one more final (and likely futile) attempt to push higher over the next couple days to few weeks.  History says it's not likely to be next week as you'll realize if you read the Historical Tendencies section below.  Where might we go?  Well, it's way too early to guess, but major long-term support on the S&P 500 near 1800 is certainly not out of the question.  It depends on how the selling - if it occurs - unfolds.

I've talked a lot recently about the VIX, so let's take a quick look at it: 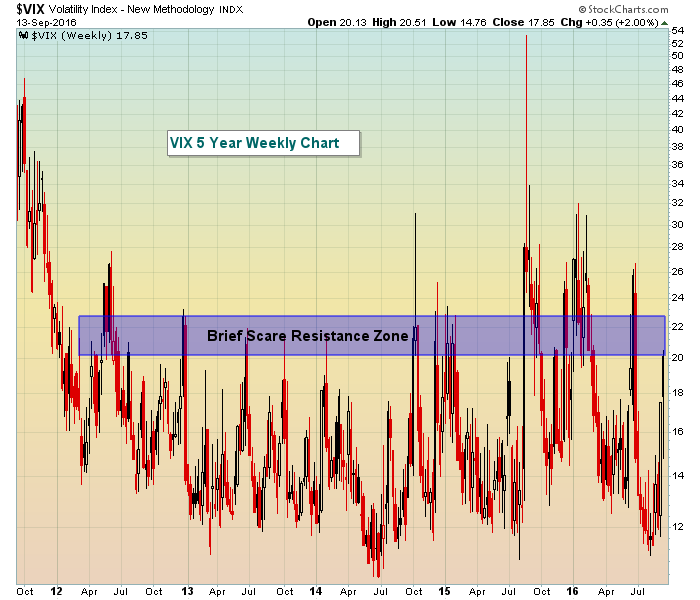 Brief spikes in the VIX in the 20-23 range have happened on many occasions over the past five years, but those spikes rarely have occurred with negative divergences on our major indices and poor relative ratios in place.  The current spike in the VIX is more dangerous because the "under the surface" signals do not currently support a sustainable bull market.  The market also loathes uncertainty and as we approach a very bearish historical period, we also have the uncertainty over the Fed and the upcoming presidential election.  The key element above is where the VIX retreats to when the market bounces.  In each of the two prior bear markets, the VIX never dropped below 16-17 support.  In other words, anxiety remained fairly high even when the market rallied.  That tells us rallies are not likely to last.  If the VIX moves back below this area and steadily downtrends again, we'll be safe again - even if only temporarily.

As we wind down the first half of September (tomorrow is the 15th), here are the annualized returns for the NASDAQ since 1971 during the month of September, broking down by the first and second halves of the month:

It should be noted that September 16th is also bullish, producing annualized returns of +69.86% over the past 45 years on the NASDAQ.  So those half month returns would be skewed even further if I included the 16th in the first half of the month.  That means that Friday's (the 16th) close is very important historically so if the bulls cannot right the ship by Friday, it could be a very rough end of September.  We shall see.