Healthcare stocks (XLV, -1.76%), utilities (XLU, -1.50%) and financials (XLF, -1.40%) led a broad-based decline on Thursday with energy (XLE, -0.17%) the only sector to escape relatively unscathed.  In particular, biotechnology and pharmaceutical shares were weak with the latter featured in the Sector/Industry Watch section below.  Biotechnology ($DJUSBT) was beginning to show life as it recently pushed through 2016 price resistance near 1700.  It has now given back that level, however, as the near-term grows more cautious.

Footwear ($DJUSFT) had another poor day on Thursday as Nike (NKE) can't seem to find a bottom despite it being September - NKE's best calendar month of the year.  NKE's cloudy outlook has driven the DJUSFT down to a major support level.  Check this out: 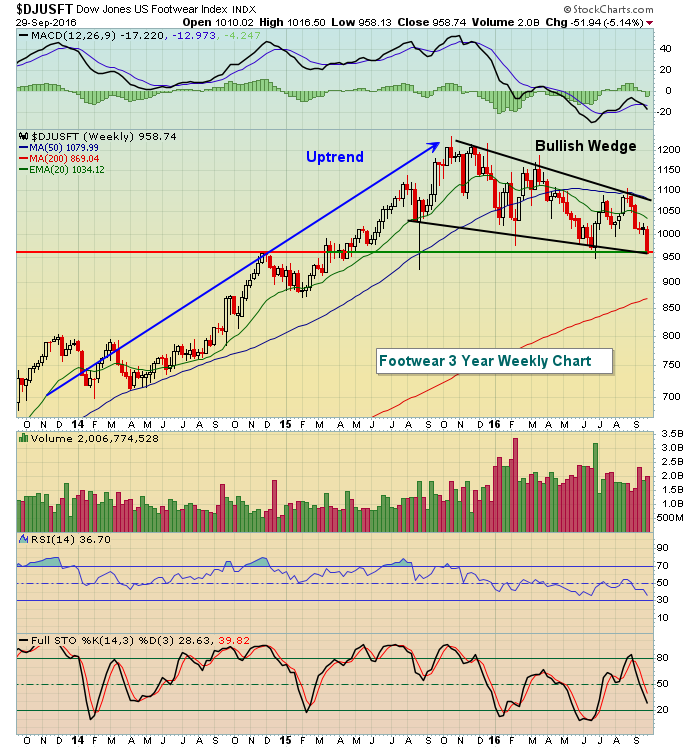 The 960 area has been strong support in the past and an argument can be made that footwear is in a bullish wedge formation.  But volume has been strong so a drop much below 950 would be concerning.  The group is in need of a reversing candle.  Also keep in mind that leadership rotates during a bull market and the DJUSFT was a leader for a long-time.  It's taken a break for nearly a year, but it's important to see its leadership resume shortly.

This morning, U.S. futures are flat as traders search for direction. 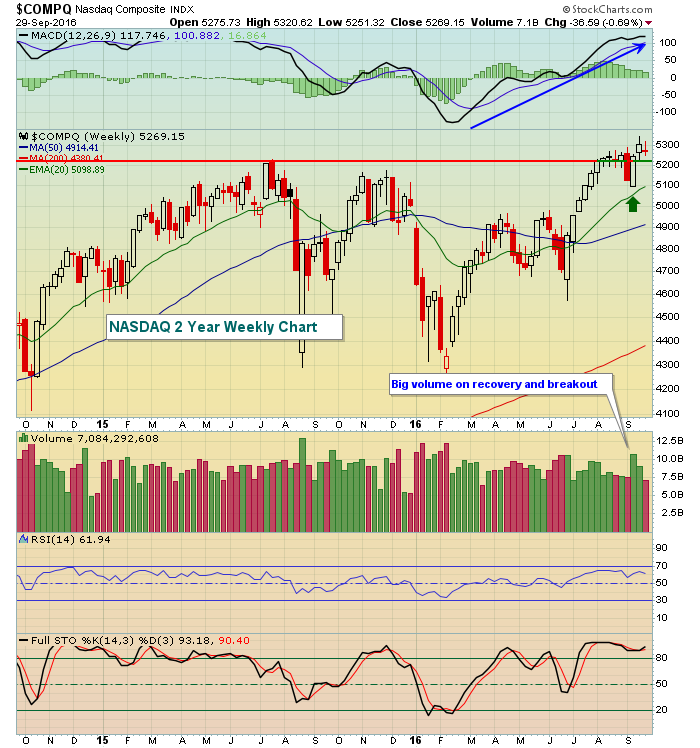 When weekly momentum is strong (MACD pushing to new highs), price support and the rising 20 week EMA are the two levels where I look for bullish action.  While we saw a temporary move beneath price support just above 5200, the rising 20 week EMA (green arrow) was approached but never breached.  So we're receiving mixed messages.  As long as the messages are mixed, I'd continue to give the benefit of the doubt to the bulls during a bull market.

The Dow Jones U.S. Pharmaceuticals Index ($DJUSPR) has been in a downtrend for the past two months but is nearing a key support level to keep its longer-term uptrend intact.  It's also approaching this support level with a positive divergence in play.  Take a look: 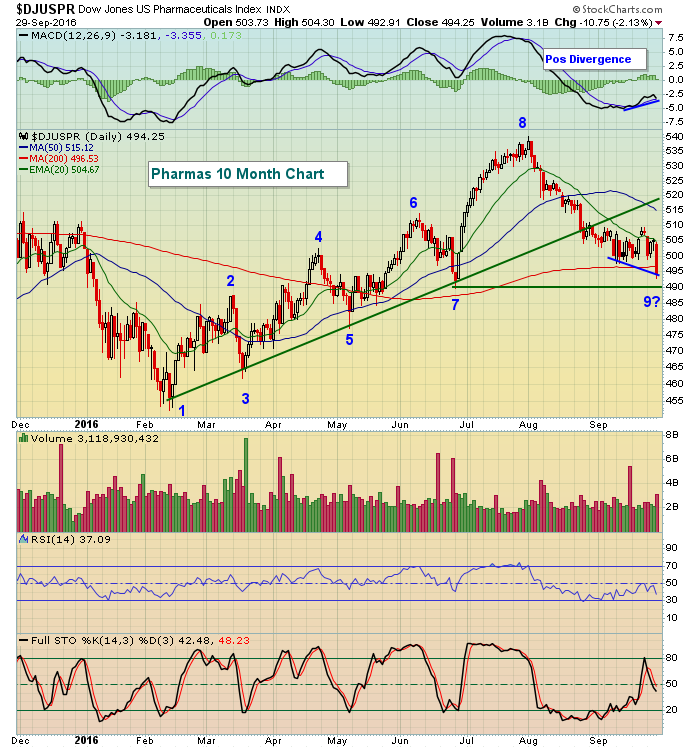 Breaking the uptrend line is a problem technically, but a bigger problem surfaces if price support near 490 fails to hold.  An uptrend is nothing more than a series of higher highs and higher lows, which I've numbered above.  The DJUSPR has a chance to turn before breaching this support, especially with a positive divergence in play.  Failure to hold support on a closing basis would be bearish for the group in my view.  I expect it to hold, but I'd respect it if it doesn't.

Prospects appear strong for the tech-laden NASDAQ Composite.  Not only have we seen a recent breakout to all-time highs with strong momentum (see NASDAQ chart in Current Outlook section above), but October is clearly the best calendar month for technology and the October-November period is the best consecutive calendar months.  Check out their history over the past 20 years: 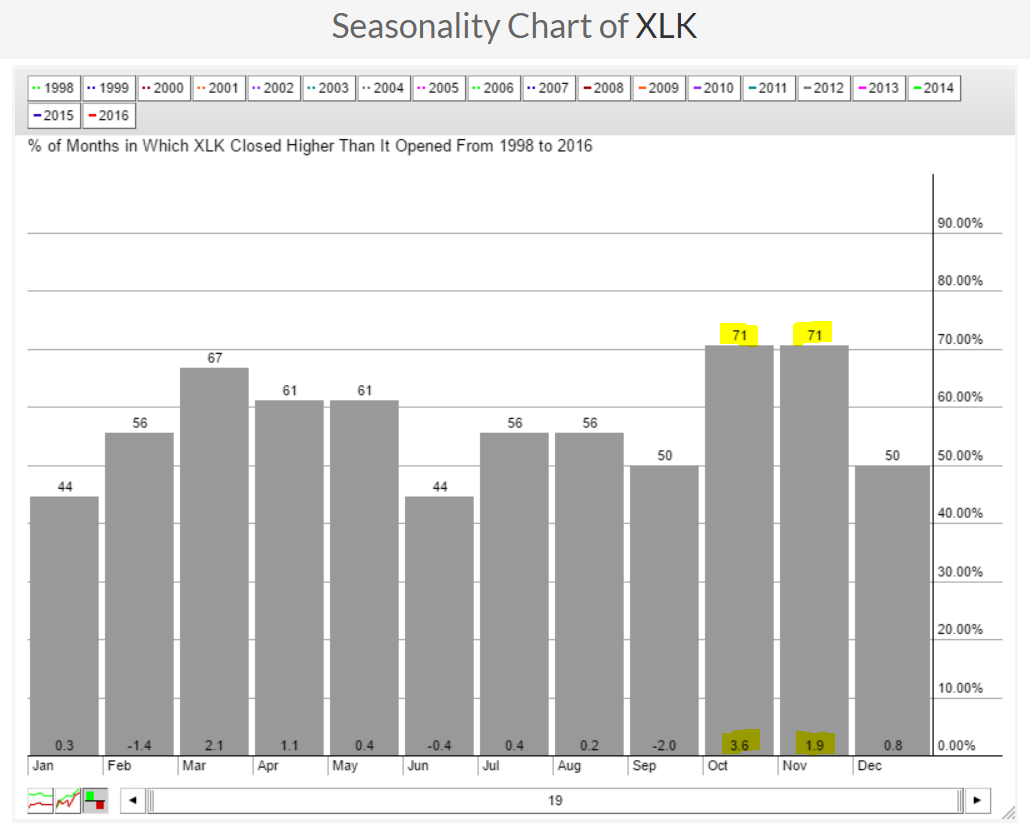 Both months tend to move higher (71% of the time since 1997) and their average monthly gains of 3.6% and 1.9% are obviously the best returns for any two consecutive months.  So those looking for a near-term drop in equity prices will have to battle history as well as the bulls.