We are in one of the most bearish historical periods of the year and I've provided a bit more information about it in the Historical Tendencies section below.  I'm pointing this out because equities took a break on Thursday and futures are down slightly this morning.  We could be in for more short-term weakness and I've identified key support levels to watch on the S&P 500 in the Current Outlook section below.

But first, let's get to Thursday's action.  All of our major indices showed declines, although the selling was contained.  In other words, I saw no major technical glitches with the selling, just normal profit taking after days of strength.  Among sectors, industrials (XLI, +0.30%) and financials (XLF, +0.24%) were the leaders.  General Electric (GE) was a nice winner as diversified industrials ($DJUSID) showed continuing September strength after breaking a recent three month downtrend.  GE is now testing its 50 day SMA after printing a recent positive divergence.  But as you can see on the following weekly chart, the longer-term momentum remains with the bears: 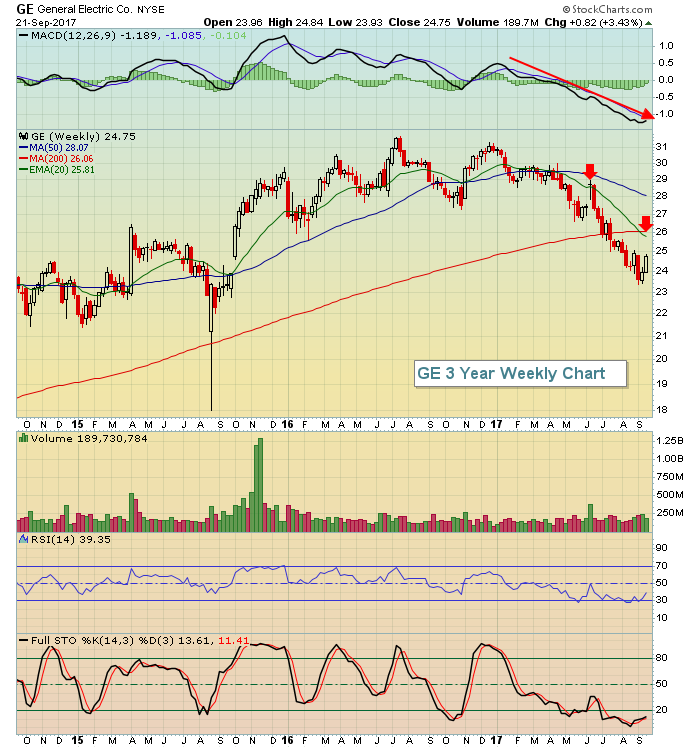 Once momentum turns south, that declining 20 week EMA becomes key overhead resistance.  Therefore, I'd say GE has another 4% or so of upside potential, but from there GE has much technical work left to do.

We're seeing a drop in the 10 year treasury yield ($TNX) and buying in gold ($GOLD) is resuming as traders turn a bit more defensive ahead of the weekend.  There was weakness in Asian markets overnight and European markets this morning are mixed.  Given the overbought conditions here in the U.S. and historical head winds, futures are struggling.  Dow Jones futures are lower by 34 points with 30 minutes left to the opening bell.

We know that history is a head wind for the U.S. equity bulls over the next few days.  In fact, as the data in Historical Tendencies below shows, the September 20-26 week has seen falling S&P 500 prices in 8 of the past 10 years with losses in seven of those years in excess of 1%.  Two of the years have seen weekly losses in excess of 3%.  So knowing that type of selling is not only possible, but historically probable, where should we be looking for key price support in the very near-term: 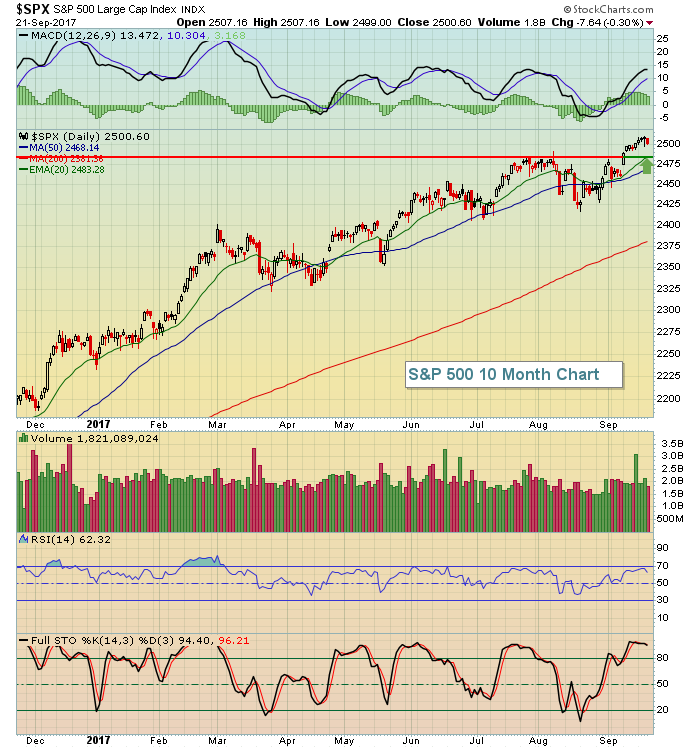 Broken price resistance becomes price support.  That's TA 101.  The rising 20 day EMA also tends to be excellent support during uptrends.  Price support and the 20 day EMA are currently at 2481 and 2483, respectively.  From our recent high, this pullback would measure roughly 1% from the September 19th high. 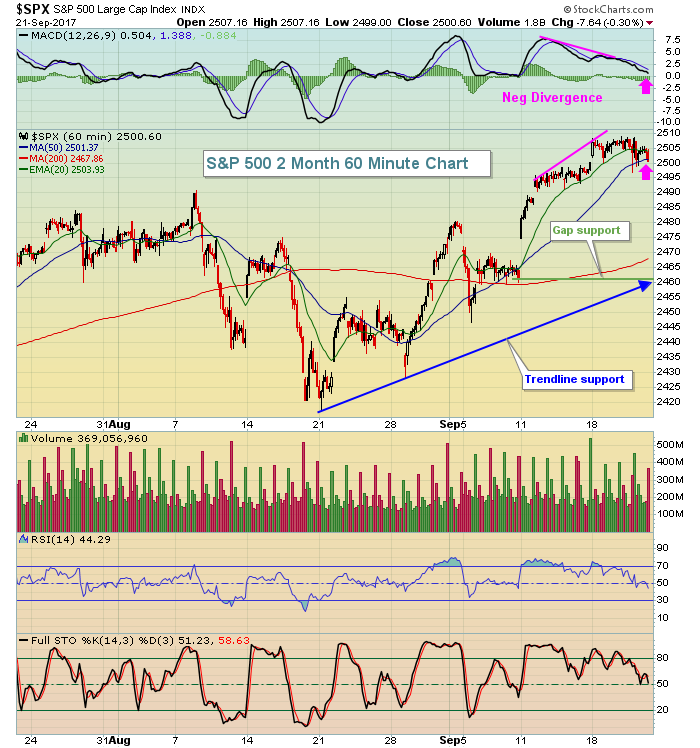 The pink arrows show that the negative divergence I wrote about a few days ago has now played out.  We've seen a MACD centerline test and 50 hour SMA test.  That doesn't mean we can't go down further.  It simply means that the short-term momentum issues are gone.  If the 2481-2483 support is lost, the next area that I see is the combination of gap and trendline support close to 2460.  I suspect, worst case, the S&P 500 holds 2460 on lows this week or next.

In the financials sector, investment services ($DJUSSB) continued their breakout from Wednesday.  That suggests that strong stocks within the space like E*Trade Financial Corp (ETFC) are more likely to make key breakouts as shown below: 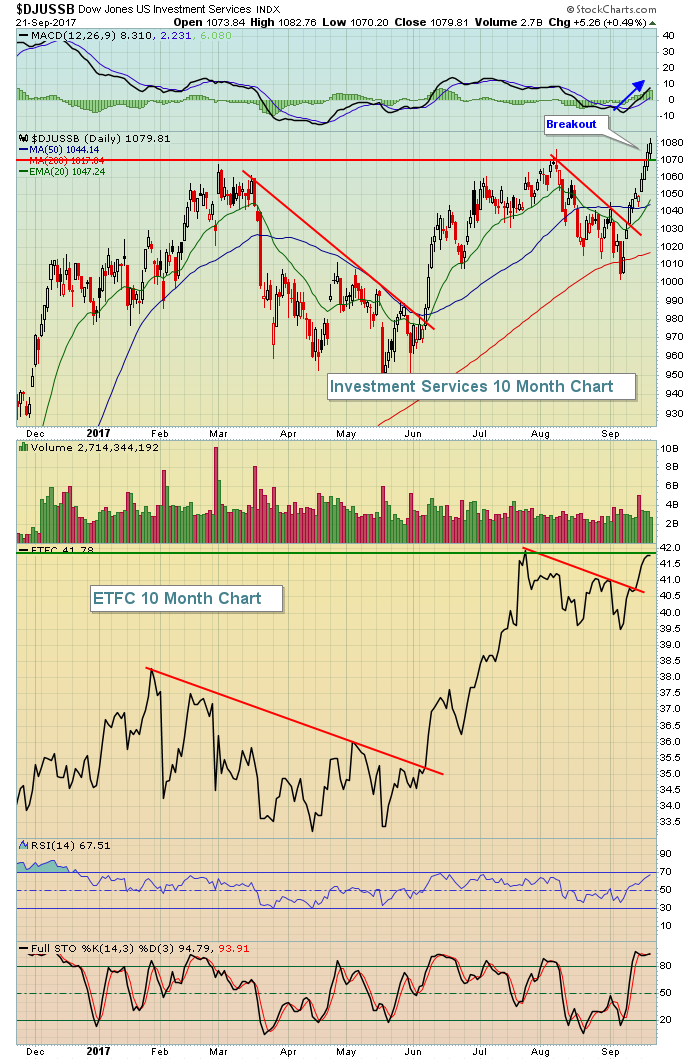 Although ETFC has been a relative laggard of late as evidenced by its failure to breakout while the overall group has broken out, its relative strength since early June is apparent.  I'd expect ETFC to follow the group's lead higher in the very near-term, with rising 20 day EMA providing excellent support during any dips.

Since 1950 on the S&P 500, there's only been one period of the year where there's been 7 consecutive calendar days of annualized losses.  It began September 20th and runs through September 26th.  Here are the annualized returns for each day:

This is how the S&P 500 has performed during this period over the past decade (actual one week returns, to annualize you'd have to multiply times 52):