It was a very rough day on Wall Street yesterday.  Mondays are historically the worst day of the week, but I doubt too many market participants were expecting the blood bath that we saw.  Aggressive areas of the market were hit hardest, including the NASDAQ and Russell 2000, which fell 3.41% and 3.18%, respectively.  The sectors hit hardest were technology (XLK, -3.77%), communication services (XLC, -3.10%), consumer discretionary (XLY, -2.98%), financials (XLF, -2.91%), and industrials (XLI, -2.85%).  Those are the five aggressive sectors and none were spared.

The technical damage was obvious: 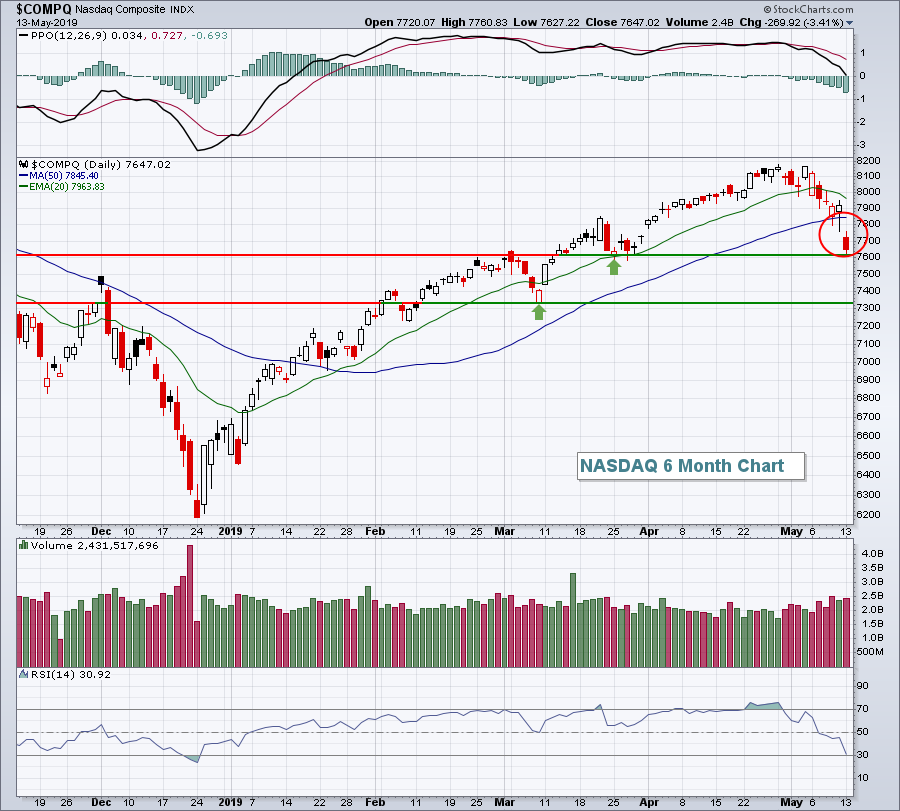 Volume was relatively heavy at 2.4 billion shares and the NASDAQ lost its 50 day SMA.  Now we look to the next two key levels of price support (green arrows), while we see if there's enough buying pressure for the NASDAQ to reclaim its 50 day SMA before losing more technical support.

Trying to point to particular areas of weakness is difficult because most aggressive areas were crushed on Monday.  Key areas that are most likely to be impacted by a continuing US-China trade war were hit hardest.  Areas like computer hardware ($DJUSCR, -5.67%) and semiconductors ($DJUSSC, -4.36%) tumbled again.  Apple, Inc. (AAPL, -5.81%) has much to lose in a trade war and traders are showing little patience with the stock.  Since approaching 215 on May 1st, AAPL has seen a steady decline and closed yesterday at just under 186.  The trade war is real and has real impacts with AAPL being a "poster child" example.

Bottoms are typically carved out with extreme pessimism, so I'll continue to watch the Volatility Index ($VIX, +28.12%) and the equity only put call ratio ($CPCE), which printed its two highest daily readings of the year Friday and yesterday.  A significant bottom is forming, but determining the exact level before it forms is nearly impossible.  It's similar to forecasting a tornado - where it will touch down and how much damage will be done.

As expected, it was another weak session in Asia with markets there mostly lower.  In Europe this morning, most indices are higher and we're looking at a potential bounce here in the U.S.  With 30 minutes left to the opening bell, Dow Jones futures are pointing to a gain of 117 points.

2019 got off to a great start, but one continuing problem has been the weak relative performance of small caps.  That worry hasn't gotten any better as the Russell 2000 ($RUT) has lagged the benchmark S&P 500 throughout the current rally.  Yes, the RUT has rallied, but the extent of its rally has fallen short of the S&P 500 and that's a concern because the RUT should outperform if the U.S. economy is considered stronger than the rest of the world.  While the correlation isn't perfect, there's definitely a bullish bias in the S&P 500 when the RUT is outperforming.  Here's the evidence: 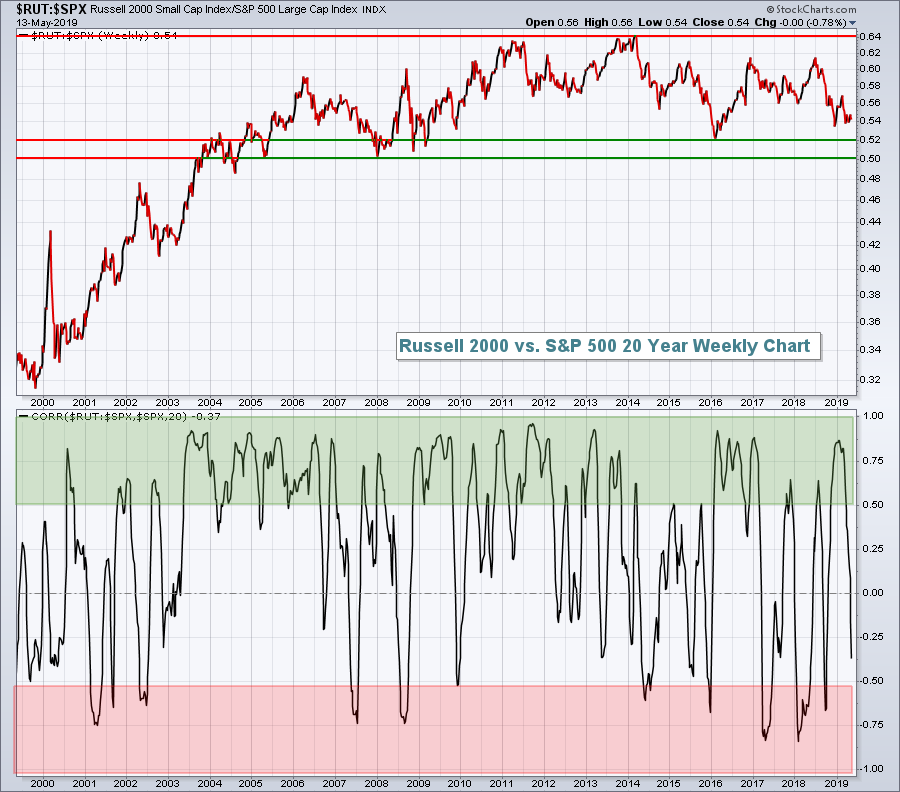 The green shaded area identifies when the RUT:SPX ratio is moving in the same direction as the S&P 500 (positive correlation is strong and above .50).  In other words, when the S&P 500 is moving higher, we generally see the Russell 2000 outperform.  The same holds true to the downside.  The red shaded area shows how often the RUT:SPX ratio moves opposite the S&P 500.  It doesn't happen very often.  My takeaway is that it's much, much better for stocks when small caps show leadership.

With that in mind, let's look at the current state of small caps' absolute and relative strength: 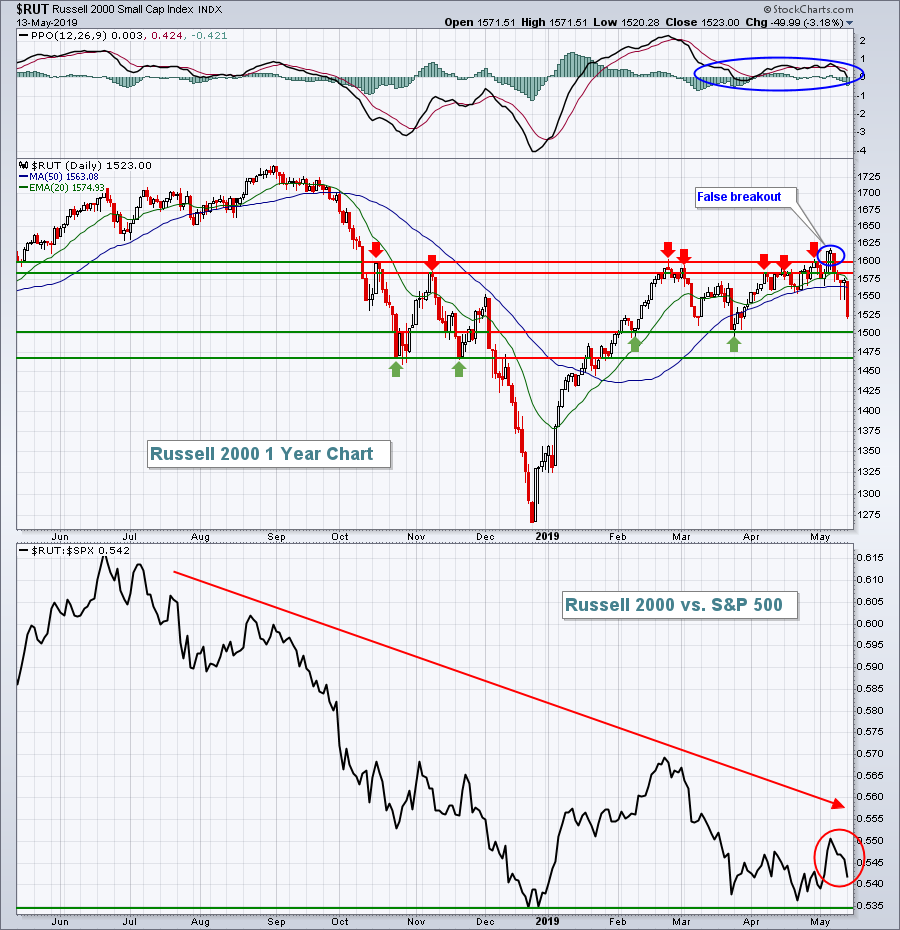 We've got a lot of work to do.

Health care providers ($DJUSHP) were leaders in 2018, but not so much in 2019.  Still, there are pockets of stocks within the industry that are strong or strengthening.  One of the latter is Encompass Health Corp (EHC), which appears to have reversed its 8-9 month downtrend after performing extremely well through the first half of 2019: 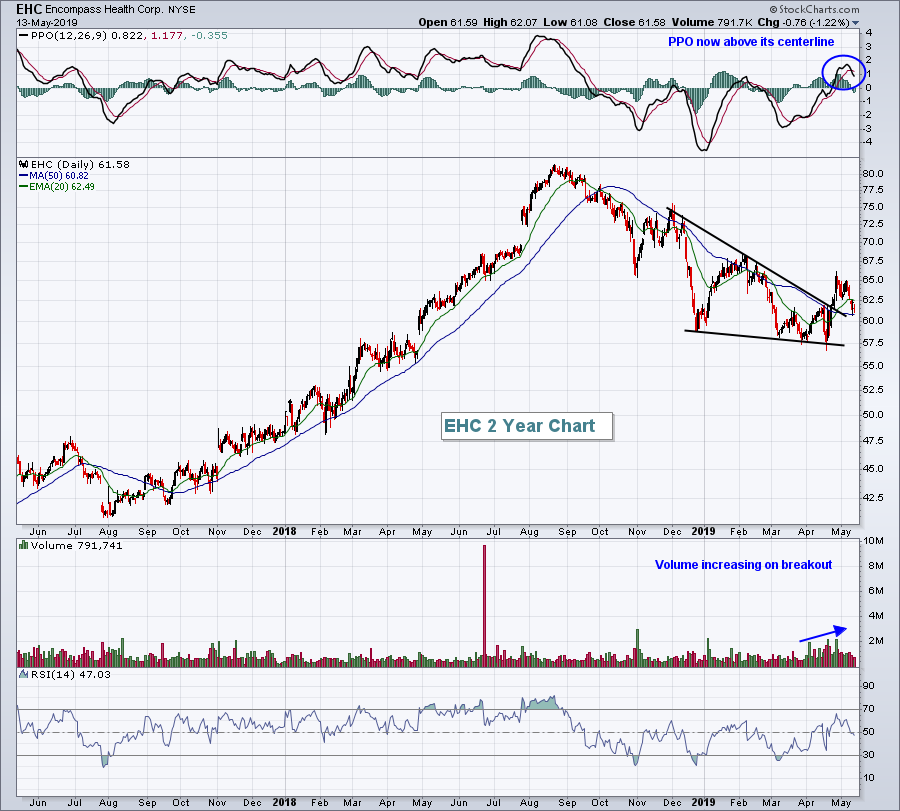 The renewed strength may appear to be random, but EHC has shown throughout its history that the April through August period has been bullish.  Check out Historical Tendencies.

EHC has averaged gaining 36.3% from April through August over the past two decades.  Here's the seasonality picture: 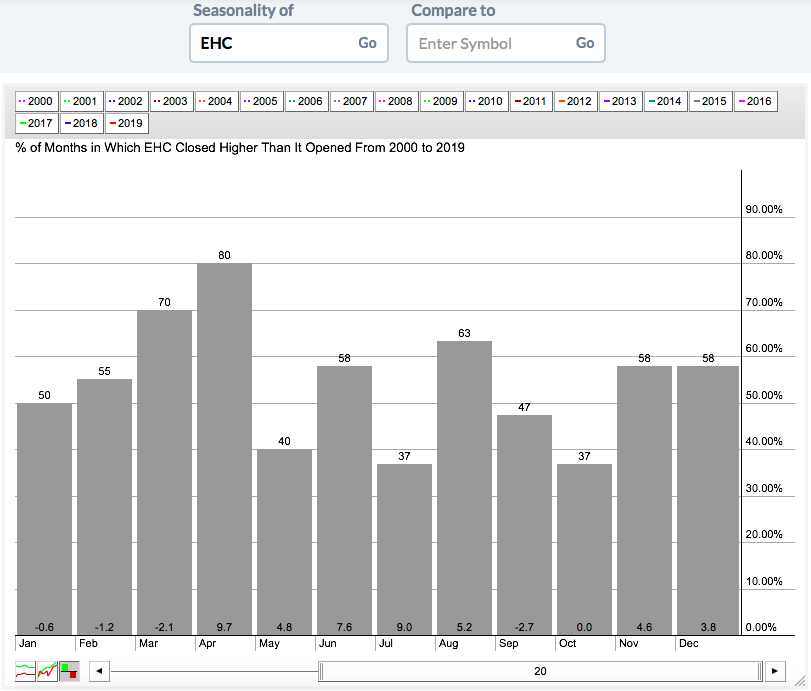 While a couple of the percentages are low, the average gains are substantial for each of the five months in the bullish period.  History would seem to support the notion of a technical breakout in April and a strong summer ahead for EHC.