I'm posting this early (and on Sunday) this week because I did a lot of chart-reviewing this weekend and there's a lot to digest here.  Before I get into my Market Outlook for the second half of the year, let's take a very quick look at Friday's action....

Well, we closed out Q2 on a positive note.  All of our major indices ended Friday in positive territory and 9 of 11 sectors were higher as well.  Consumer staples (XLP, -0.07%) and technology (XLK, -0.01%) were minor losers on the session.  Financials (XLF, +1.43%), led by banks ($DJUSBK, +2.28%), extended their leadership in the second quarter.  Many don't realize it (I had to take a second look), but the XLF was the best performing sector ETF in Q2, rising more than 8%.  Many banks were in the news on Friday as buybacks, increased dividends and successful stress tests littered the headlines for the group.

Of the top 5 sectors on Friday, 4 were aggressive sectors.  When the stock market is rising and being led by aggressive groups, it's generally a sign of sustainability.  It's one of the reasons I remain very bullish as move into the second half of the year.

Industrials (XLI, +1.06%) enjoyed another advance on Friday as transportation stocks ($TRAN, +1.49%) spiked to their highest level in five weeks.

A lot can change between now and tomorrow morning, but Dow Jones futures are currently higher by nearly 200 points after President Trump and President Xi Jinping agreed to hold off on additional tariffs in order to resume trade talks.

The U.S. stock market has been extremely resilient with the S&P 500 recently posting all-time highs, despite concerns regarding trade, interest rates, economic activity, politics, etc.  I will spend time throughout the week discussing what I believe are very bullish signals about market direction in the second half of 2019 and beyond.

First and foremost, we're in a secular bull market in my opinion: 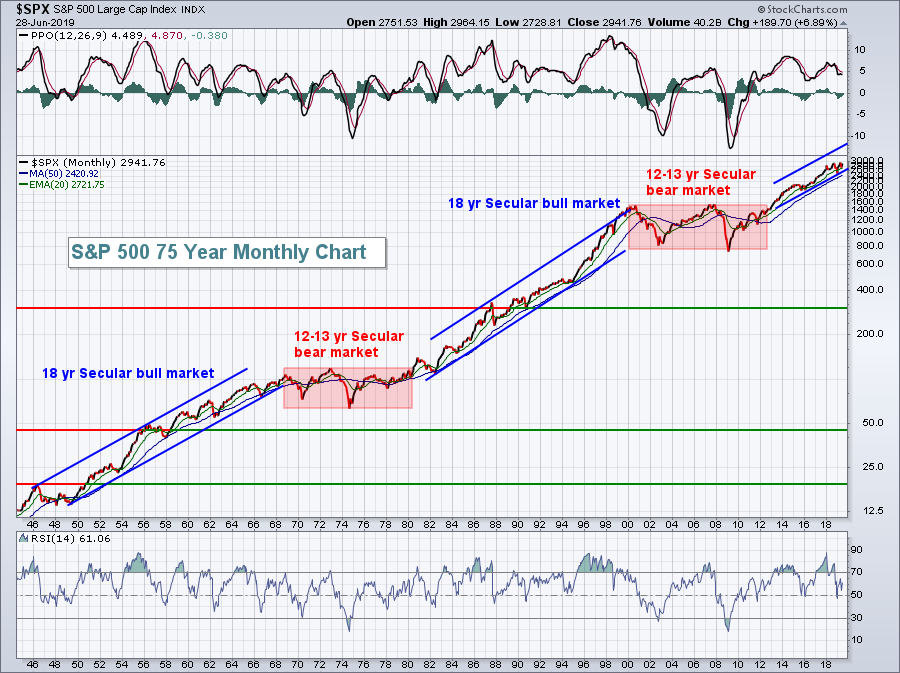 Not only do I believe we're in a secular bull market, but I also believe we're in the early innings of it.  When I approach the market, I do so with the above big picture chart in mind.  It's why I didn't buy into the Q4 cyclical bear market last year.  It turned out to be a great buying opportunity.  The April/May 2019 selling episode ended in the same fashion - with a massive rally despite all the media playing up the trade war and anything else negative that they could find.

As I look out over the second half of 2019, I'm most interested in how industries are performing on a relative basis (vs. benchmark S&P 500).  I'm also interested in trading stocks almost exclusively within the aggressive sectors - technology (XLK), consumer discretionary (XLY), communication services (XLC), industrials (XLI), and financials (XLF) - as I believe we're in the midst of a secular bull market, as discussed above.  Investing outside these sectors, with the possible exception of healthcare (XLV), cuts into returns in my opinion.  While there are many excellent companies in the remaining sectors, I believe the odds of pinpointing big winners are much lower.  I've categorized 28 different industry groups into various buckets of relative strength:

As an example of what one of these industry groups looks like on a relative basis, check out the Specialized Consumer Services group: 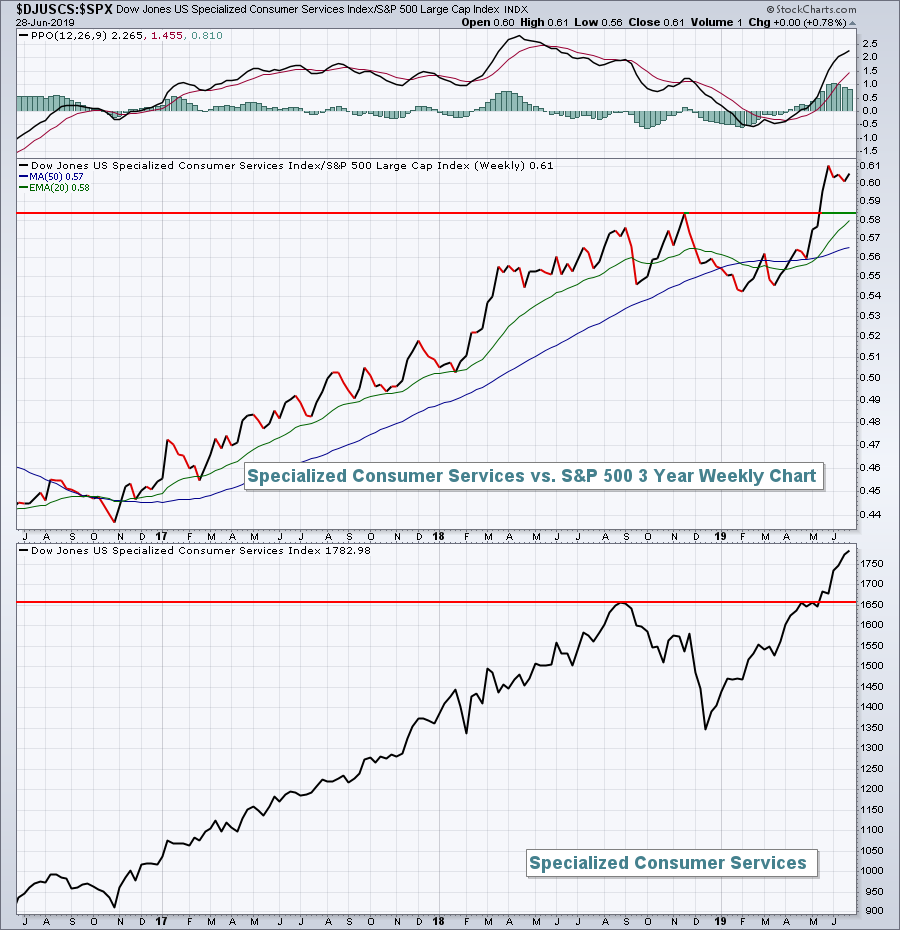 There was a huge relative advance, followed by consolidation, and during the past two months we've seen another significant relative breakout.  Money is pouring into specialized consumer services stocks.  A leader in this industry group, MercadoLibre, Inc. (MELI) is one of my 7 other Monday Setups this week.  Check it out by following the link in the Monday Setups section below.

These groups don't have the longer-term track record of outperformance that the "Persistent Strength" groups do, but they have been outperforming and there's reason to believe they'll continue to do so....until they don't.  Here's the list:

There are a number of very influential industry groups that should be monitored closely and for different reasons.

Semiconductors ($DJUSSC) - a very influential industry group within technology.  Its recent relative low held the prior low and it's now bouncing.  Continuation of this recent relative strength would bode very well for both technology and the overall market during the balance of 2019.

Specialty Retailers ($DJUSRS) - has been a solid relative performer for a long time, but it's been unable to clear its relative resistance line established one year ago.  Still, it's an area I'm comfortable trading for now.

Home Construction ($DJUSHB) - the low 10 year treasury yield ($TNX) has led to very strong relative strength in home construction stocks.  The problem with the group is that it's very sensitive to the direction of interest rates, which means we need to continually monitor the performance here.  The DJUSHB has been exceptionally strong and I expect the group to continue doing well, but following interest rates in the second half of the year will be paramount if you trade in this area.

Broadline Retailers ($DJUSRB) - has been trending higher again in both absolute and relative terms, which is a very good sign for the overall market.  However, its relative high was set in August 2018 and the DJUSRB has since been unable to pierce that relative level.  I like the group, but I'd like it even more if we get the relative breakout during the next 6 months.

Relative leaders don't just start that way.  They typically begin to lead after months or years of relative underperformance.  The following industry groups have been relative laggards for quite awhile, but might surprise everyone with big second half moves:

Of special note is the Furnishings group, which broke out on an absolute basis (as did Toys) on Friday: 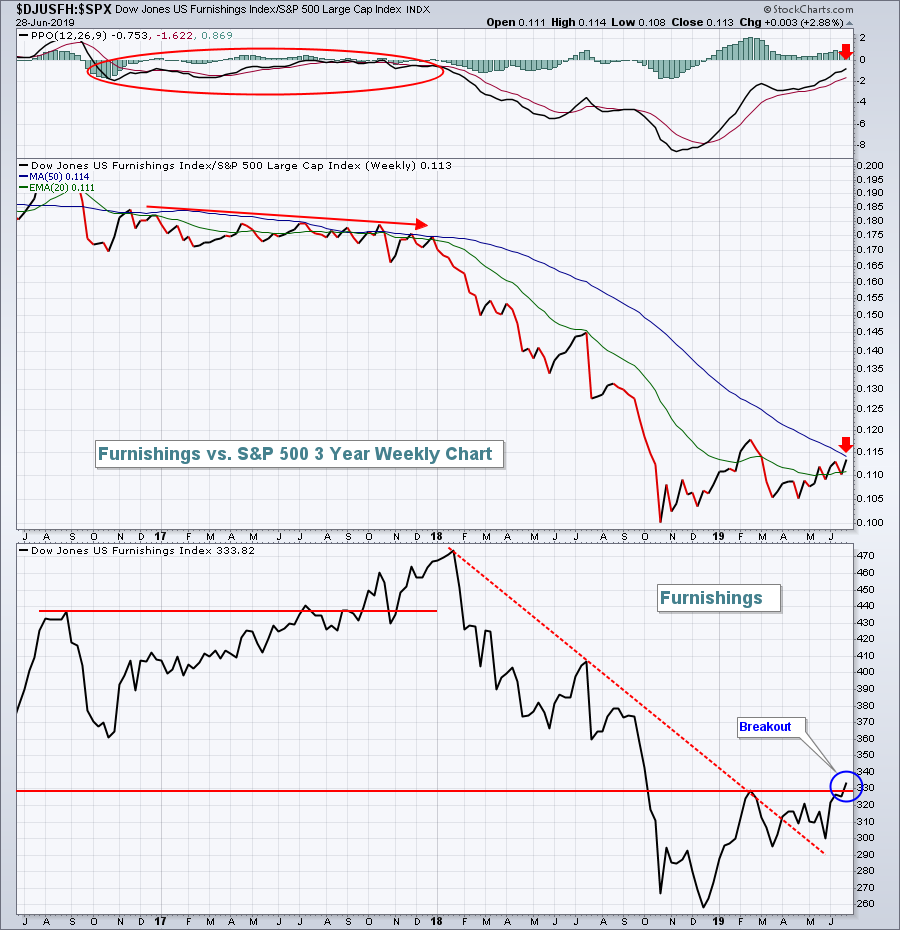 I'll give you a word of caution, though.  We saw the DJUSFH break out on an absolute basis in 2017, because the overall market was moving higher.  The relative strength never materialized, however, and the weekly relative PPO failed at centerline resistance.  This could be a repeat in 2019, but if relative strength continues and follows the absolute strength to fresh highs, furnishings could be a big winner in the second half of the year.

This group includes areas of the market that have been relative leaders, but are showing signs of relative weakness as we enter the second half of 2019.  Unless they turn higher quickly, I'd be very careful trading stocks within these groups:

Let's stick with relative strength winners.  L3 Technologies, Inc. (LLL) has been a leading defense stock in 2019 as the defense industry ($DJUSDN) rebounds.  Every recent relative strength winner won't work, but the odds are stacked in your favor if you focus on areas and stocks where money has rotated INTO.  LLL has seen a beautiful advance in 2019, but slowing momentum was at least partially responsible for its recent woes: 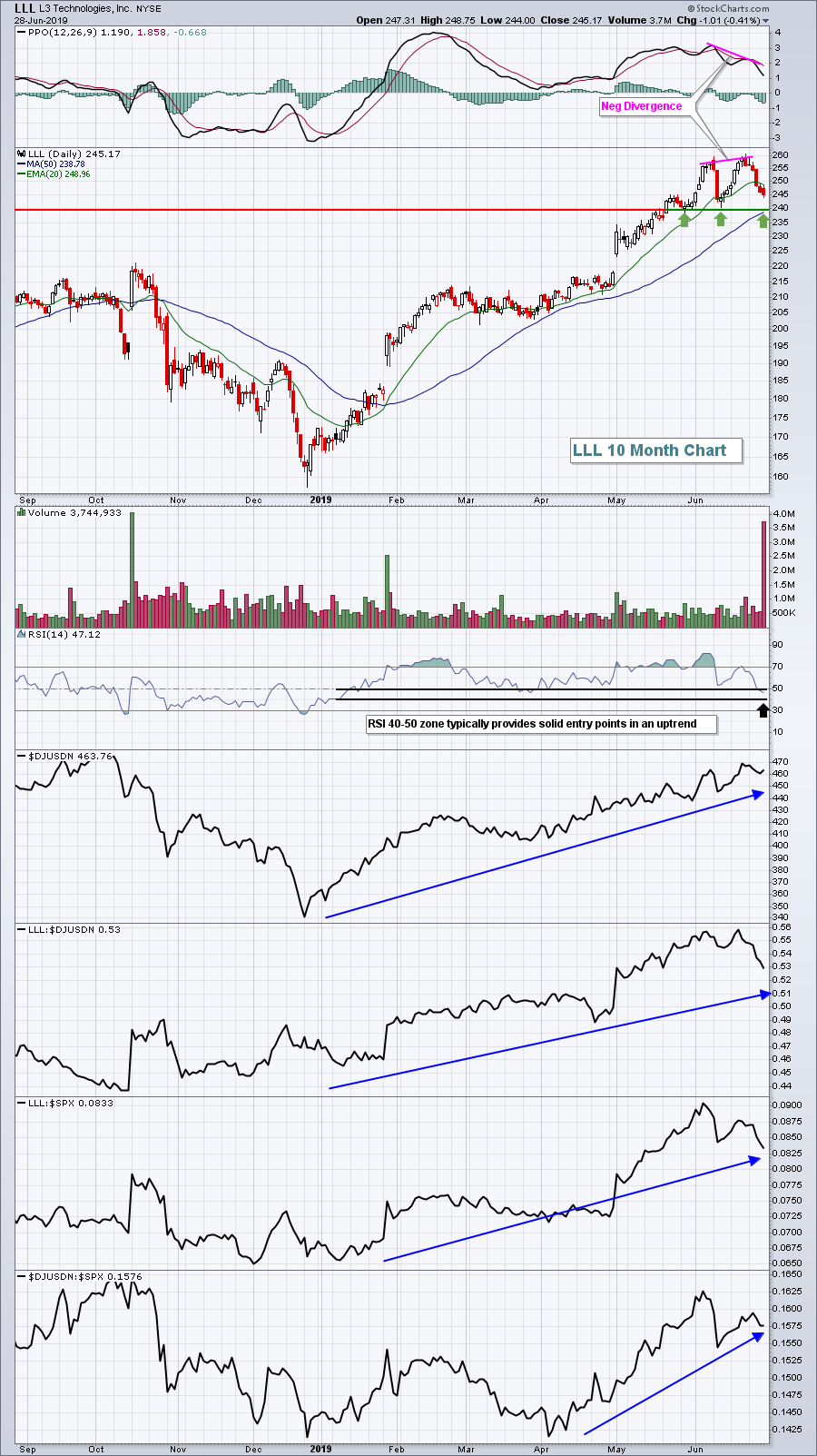 I like entry from the current price down to the 50 day SMA with a closing stop beneath 238.  My initial target would be a test of price resistance close to 260.  I expect LLL to eventually break out above this resistance.

LLL is part of my Strong Earnings ChartList, which tracks companies that have beaten Wall Street consensus estimates as to both revenues and earnings per share (EPS) and look solid technically.  Currently, there are 280 companies on this Watch List.  John Hopkins, President of EarningsBeats.com, is currently offering a link to check out all 280 charts for any subscriber to their 3x a week free newsletter, EarningsBeats Digest.  CLICK HERE to subscribe to their free newsletter and to obtain access to the 280 Strong Earnings ChartList stocks.  For me, it's rather simple.  If management can't deliver on their promises (revenue and EPS estimates), I don't invest in their company.

I've provided 7 other Monday Setups for this week.  You can access the charts HERE.

Since 1950, the S&P 500 has produced annualized returns as follows during each of the four calendar quarters:

The second half of calendar years have outperformed first halves, on average.