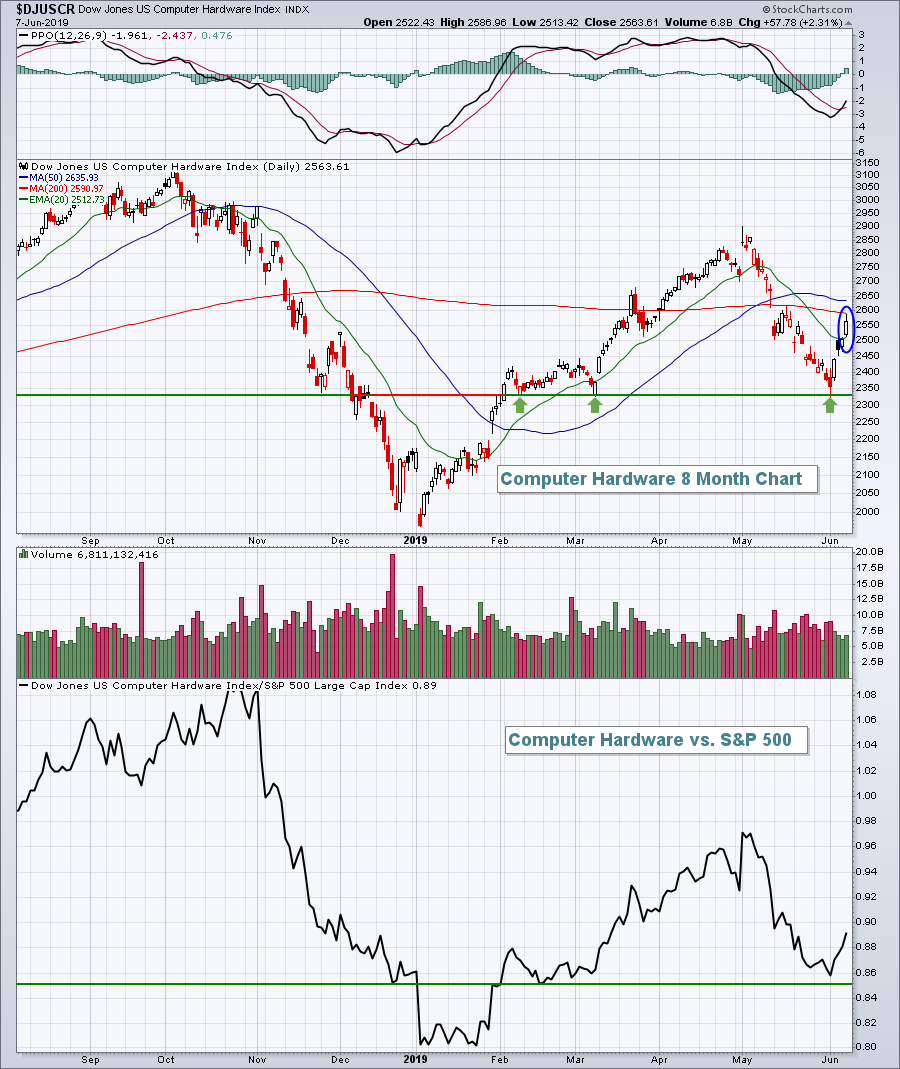 Keep an eye on both of the above support lines.  I believe the odds of a significant market decline increase by a big margin if a key group like computer hardware fails to hold both absolute and relative price support.

Companies like Apple (AAPL, +2.66%), Alphabet (GOOGL, +1.97%) and Microsoft (MSFT, +2.80%) aided the rally in aggressive areas of the market.  MSFT ended last week with a market capitalization above $1 trillion, easily outdistancing itself from AAPL, GOOGL and Amazon.com (AMZN, +2.83%).  Wall Street is making a statement about MSFT and we should all be listening.  It's a must own for now given its strength in the very bullish software space ($DJUSSW, +2.12%).

China's Shanghai Composite ($SSEC, +0.86%) rallied to test overhead price resistance at 2850.  The SSEC has been underperforming most global markets over the past 6-7 weeks, since topping in April.

Semiconductors ($DJUSSC, +1.28%) jumped back above its 20 day EMA on Friday, which is very noteworthy because the group managed to hold relative support established during Q4 2018 and is now beginning to show relative strength again.  While I won't say that continuing relative strength in the DJUSSC is a "must" for the market to resume its 2019 rally, it most definitely would be a welcome development for the bulls: 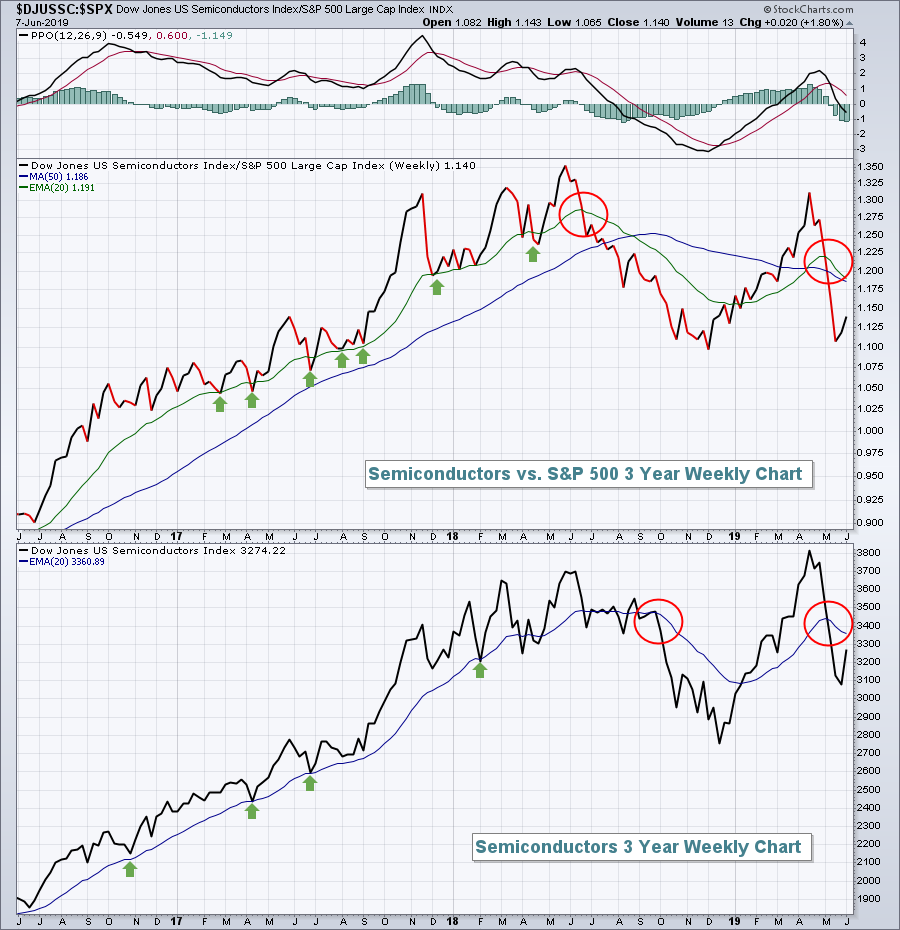 The green arrows highlight the strength in semiconductors throughout 2017 into early 2018.  When the semiconductors were rolling higher, so too was the overall market.  But the red circles illustrate the real importance of semiconductors.  When this group lost both its absolute and relative strength, we saw significant deterioration in our major indices.  Earlier, I mentioned that the DJUSSC closed above its 20 day EMA on Friday, but it's still got some work to do to clear its 20 week EMA.  Such a move would add to the bullishness in the overall market and is a development that I'd keep a very close eye on.

I'll discuss the characteristics that I look for in selecting these Model Portfolio stocks during the webinar and would love to have you join me.  To join me, follow this link for more information and to register.

The Dow Jones U.S. Drug Retail Index ($DJUSRD) has been a train wreck since early December 2018 as the group is down a third from that high, significantly underperforming the benchmark S&P 500.  It exemplifies the importance of steering clear of areas hurt by sector and industry rotation.  There is potentially good short-term news, however.  First, check out the apparent slowing downside momentum (positive divergence) below: 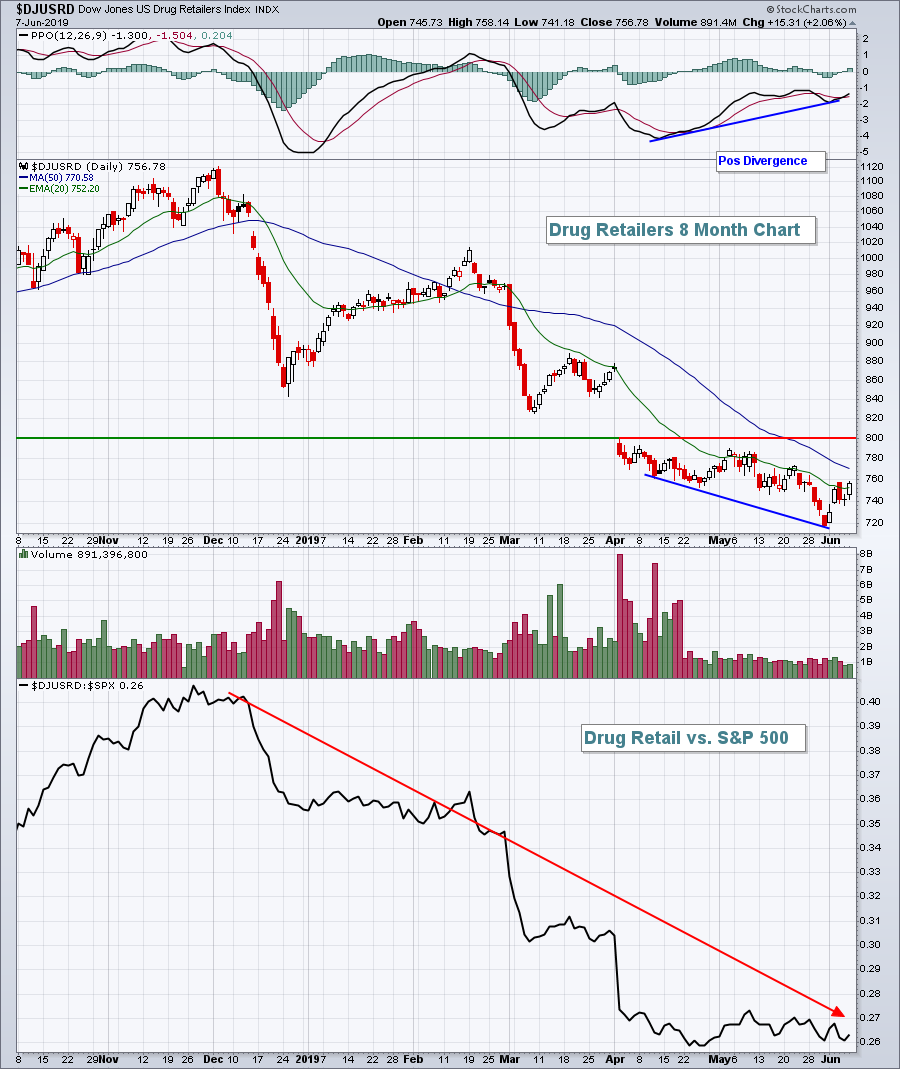 It's quite possible that we've seen a 2019 low, although I would definitely respect this chart if we see another breakdown.  In addition to the technical signal that the worst could be behind the group, check out the Historical Tendencies section below.  The DJUSRD most definitely prefers the second half of calendar years historically.

Ollie's Bargain Outlook Holdings (OLLI) reported strong earnings late last week and initially sold off hard, but rebounded to print a doji (reversing candle) on its 50 day SMA.  I'm looking for strength off of that action: 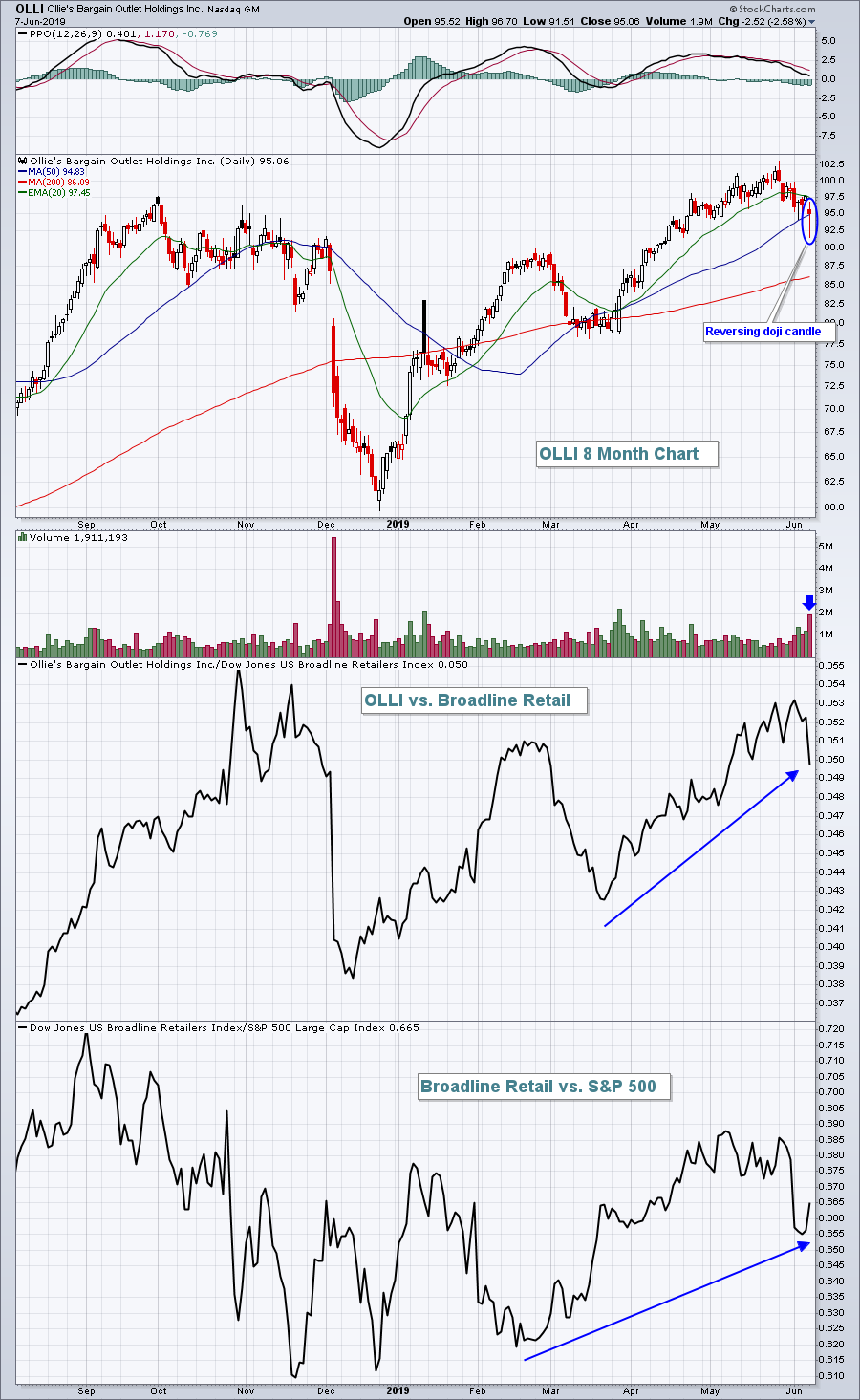 Broadline Retail ($DJUSRB) has begun to strengthen once again relative to the benchmark S&P 500 in June and OLLI has been a bright spot in that industry group.  I prefer trading stocks showing relative strength.  I'd simply keep an intraday stop beneath Friday's low.

I have two additional trade candidates this week.  You can review those charts by CLICKING HERE.

Walgreens Boots Alliance (WBA) is part of the very weak drug retail area ($DJUSRD), but there's a positive divergence in the group as reflected above in the Sector/Industry Watch section, and WBA likes the upcoming month of July: 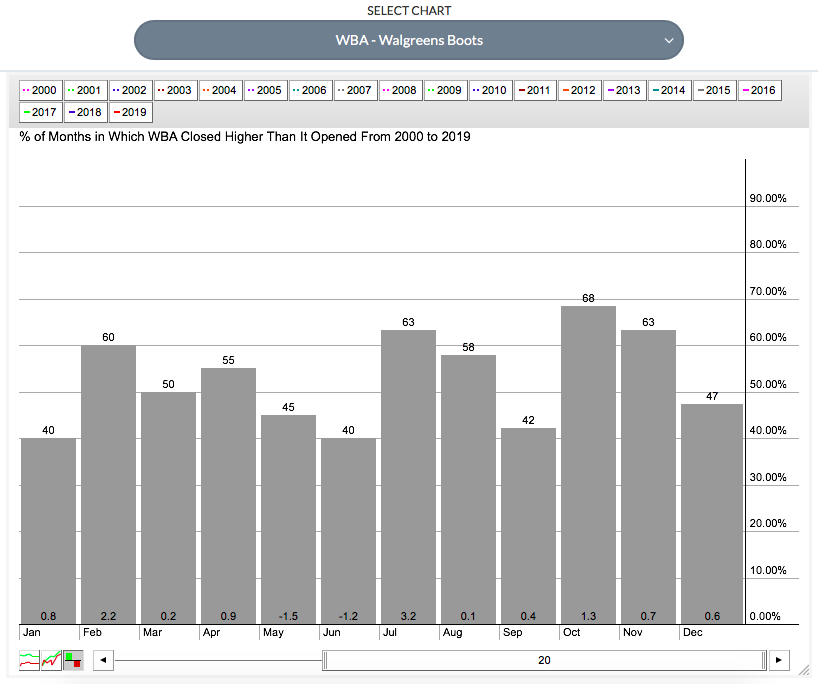 The average return in July of 3.2% is WBA's best among the calendar months and it's risen close to two-thirds of all Julys this century.  Furthermore, WBA's average return from January through June is +1.4%.  The July through December period, however, has produced average returns of +6.3%.  WBA seems to enjoy the second half of the calendar year.