It was a day of rallying global equities, especially in the German DAX ($DAX, +2.03%).  The DAX ($DAX) moves more in sync with U.S. equities than any other foreign equity market - in my opinion.  The long-term positive correlation between the DAX and the S&P 500 backs me up on this.  Therefore, we shouldn't ignore what the DAX did yesterday: 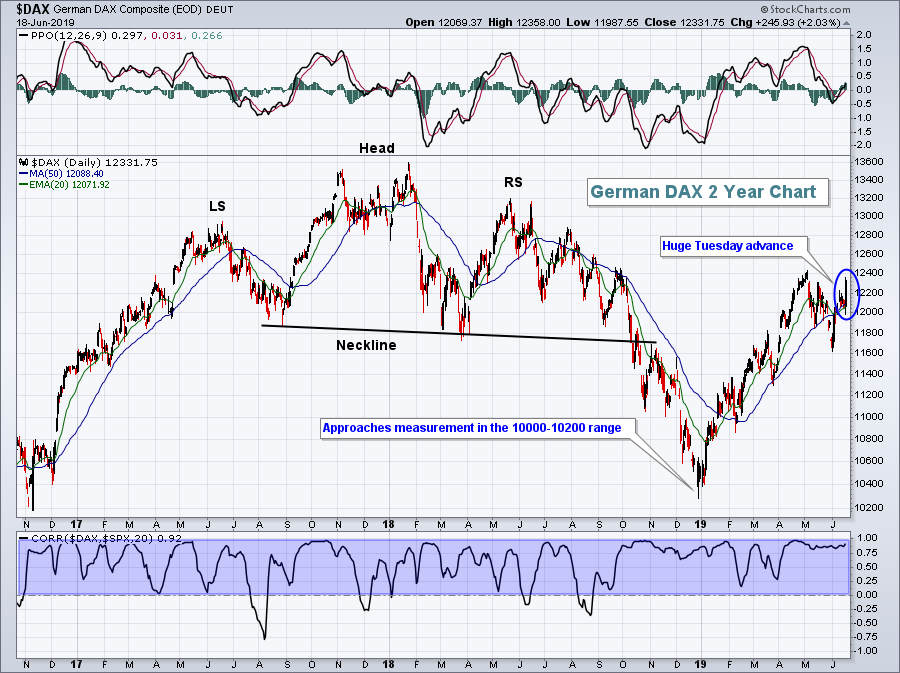 The DAX was under pressure throughout much of 2018, especially after breaking down from a topping head & shoulders pattern.  That measurement was achieved in December 2018, however, and the DAX has been higher ever since.  The blue shaded area above highlights the positive correlation I spoke of earlier.

Many wrote about Germany's downtrending market in 2018, but I believe it was all part of a much bigger picture uptrend as reflected below: 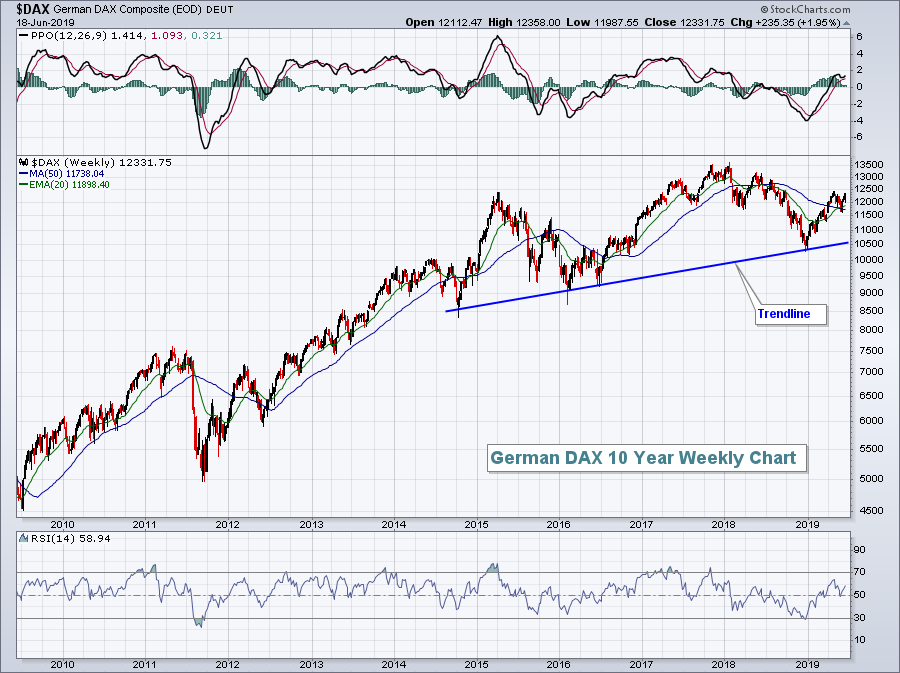 Here in the U.S. on Tuesday, semiconductors ($DJUSSC, +4.13%) gave the market a big lift.  This is a very influential and aggressive area of the market.  Any time we see a rally like the one yesterday, it generally will give the overall market a lift.  Also, the start of a 2-day Fed meeting yesterday has U.S. traders anticipating more dovish language out of the Fed today, possibly even a rate cut.

Dow Jones futures are higher by 28 points with 30 minutes left to the opening bell as traders attempt to continue yesterday's broad rally.

The relative performance of consumer discretionary stocks (XLY) vs. the benchmark S&P 500 ($SPX) is important because it helps us to understand the psyche of the U.S. consumer.  Stocks move higher primarily due to improving prospects for growth in revenues and earnings.  When the XLY moves higher and at a faster rate than the SPX, it's a very positive signal about how market participants feel about the U.S. economy.  Currently, that relative strength is apparent: 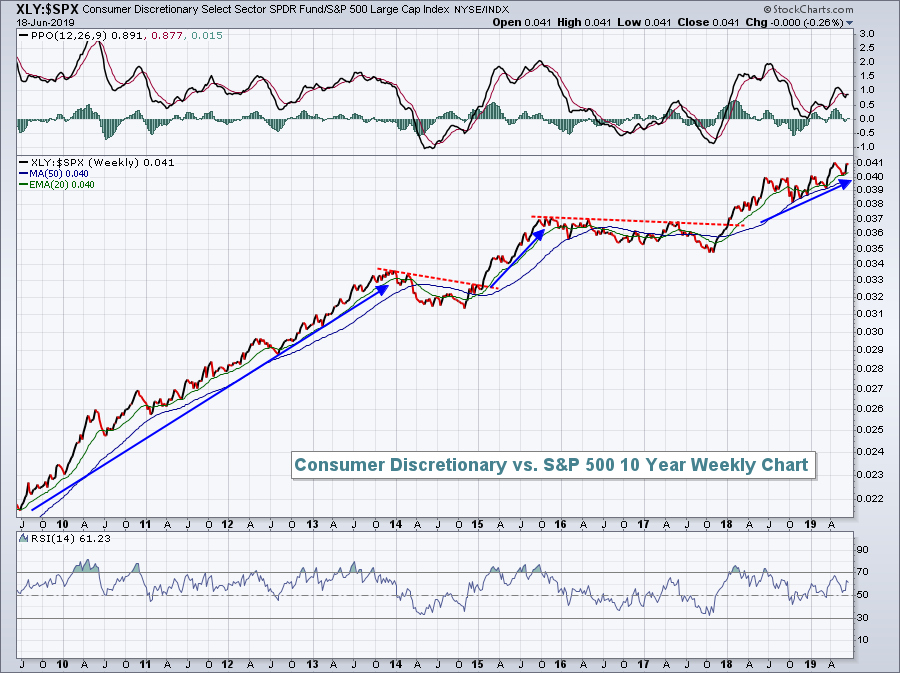 I know that we hear a lot about the latest weak jobs report, the Fed's delayed response to falling treasury yields, the trade war with China, a potential Iranian conflict, seasonal summer slowdown, etc., but the MONEY continues to flow into many of the right places and that's what I'm mostly concerned with.  Follow the charts, not the "noise".

The U.S. stock market is poised to move higher in time, not lower.

The industrial sector (XLI, +1.94%) broke to a 6 week closing high on Tuesday, but remains beneath the September 2018 and April 2019 highs.  Defensive sectors like real estate (XLRE) and utilities (XLU) have, in contrast, broken above prior highs.  So an obvious question is.....should we be concerned about the relative weakness of an aggressive area like industrials?  I don't think so, at least not yet.  The longer-term relative uptrend remains intact and it's not unusual at all for aggressive areas to simply consolidate or even weaken on a relative basis for a period of time.  To illustrate, check out this chart that highlights the relative performance of industrials to the benchmark S&P 500 (XLI:$SPX): 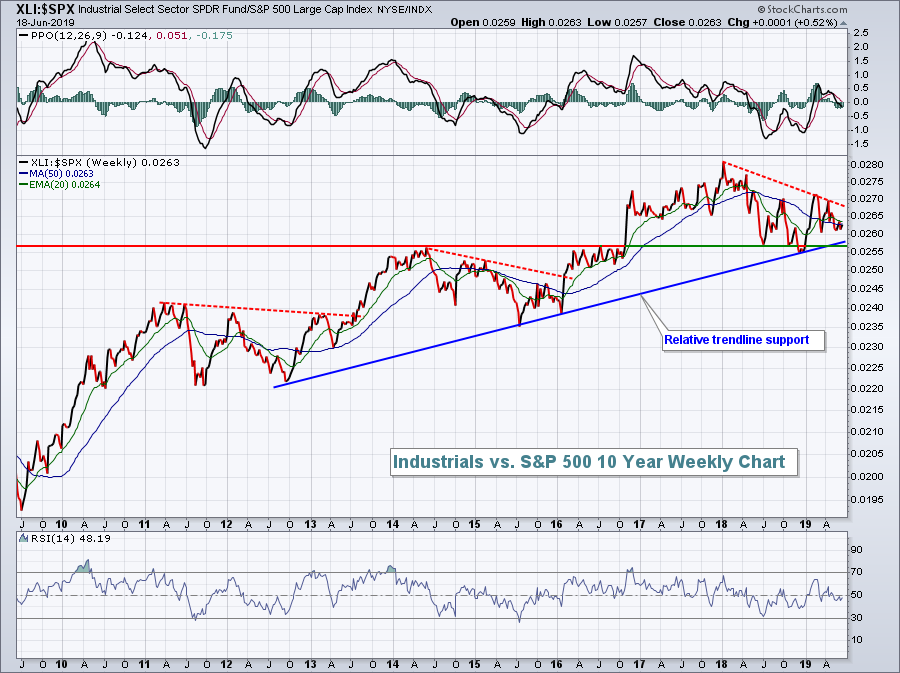 The overall relative uptrend remains in play, despite multiple 1-2 year periods of relative underperformance.  Money rotates so we shouldn't try to micro-manage relatively short-term periods of weakness.  However, I would grow more concerned if this ratio broke below .0255.  That would represent the loss of both relative price support and relative trendline support.

FOMC policy statement to be released at 2:00pm EST