Materials (XLB, -1.15%) led the Monday decline as the U.S. Dollar Index ($USD, +0.10%) extended its recent gains, climbing for the 7th time in the last 9 sessions.  Given the strong jobs report on Friday, fewer market participants are expecting a 50 basis point reduction in the fed funds rate when the FOMC meets later this month.  That has helped to strengthen the dollar after a very difficult June for the greenback.

The Dow Jones and S&P 500 outperformed on a relative basis, dropping just 0.43% and 0.48%, respectively.  Meanwhile, the more aggressive Russell 2000 and NASDAQ fell 0.90% and 0.78%, respectively, as there was a flight to safety.  That mentality resulted in leadership from real estate (XLRE, +0.37%) and utilities (XLU, +0.15%) on a somewhat boring session.  Like Friday, U.S. equities opened lower, but this time failed to mount a serious rally.

Financials (XLF, -0.50%) lost a little ground on Monday, but the sector overall has been advancing and nearing an important price resistance level near 28.50.  That represents the XLF's 52-week high and its all-time high isn't far above that: 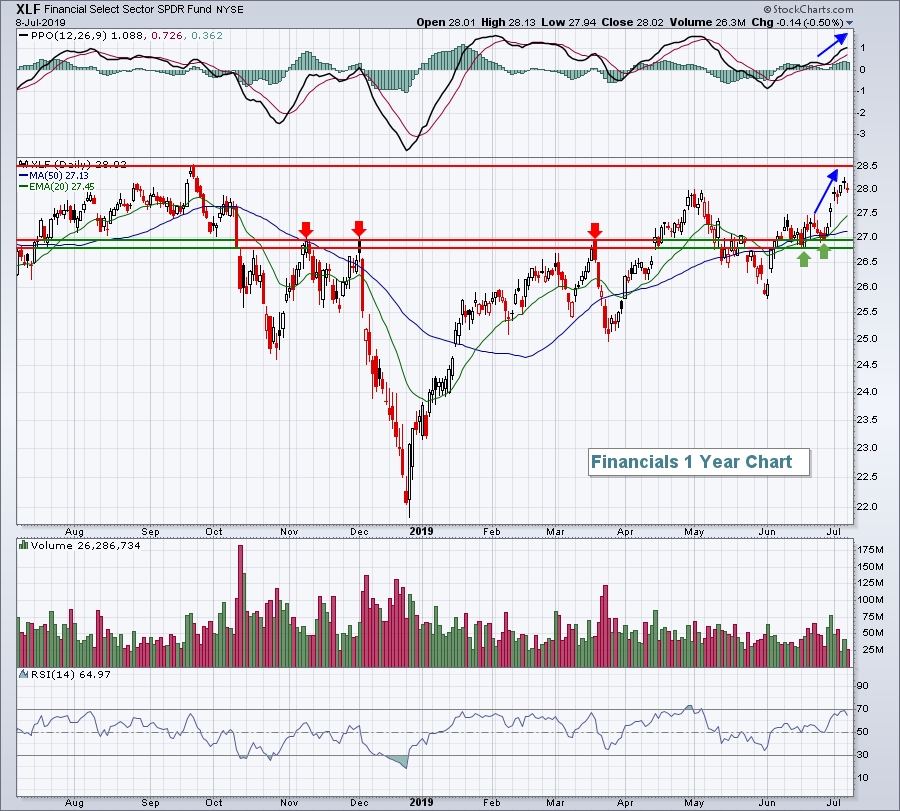 Bull markets require wide participation and the XLF has begun cooperating in 2019.  A breakout would further confirm the sustainability of the 10 year bull market.

The 10 year treasury yield ($TNX) is up 2 basis points this morning to 2.05%, testing its declining 20 day EMA, which is currently at 2.06%.  The TNX hasn't closed above its 20 day EMA since May 2nd, or nearly 10 weeks.  A break above the 20 day EMA would suggest rotation out of defensive treasuries, which generally results in a stock market advance.  Time will tell.

Crude oil ($WTIC) is up slightly this morning, while gold ($GOLD) is lower by $6 per ounce to $1394.  Asian markets finished mixed with some pressure from Apple (AAPL) suppliers after that tech behemoth was downgraded on Monday to a sell.  More on this in the Sector/Industry Watch below.

The German DAX ($DAX) is down a bit more than 1% this morning and that has added to selling pressure here in the U.S. this morning.  Currently, Dow Jones futures are lower by 108 points as it looks like we'll extend the selling that we saw on Monday - at least at the open.

The long-term view of consumer discretionary (XLY, +0.15%) is most definitely a bullish one.  Yesterday's gain came despite the overall selling in equities and the XLY appears poised for further gains to me.  An important trendline forms and major bottoms occur when panic strikes the market and the baby is thrown out with the bath water.  In the current bull market, those moments hit in 2010, 2011, 2016 and 2018.  Three of those lows (all except 2016) can be connected to form what I believe is an extremely important bull market trendline: 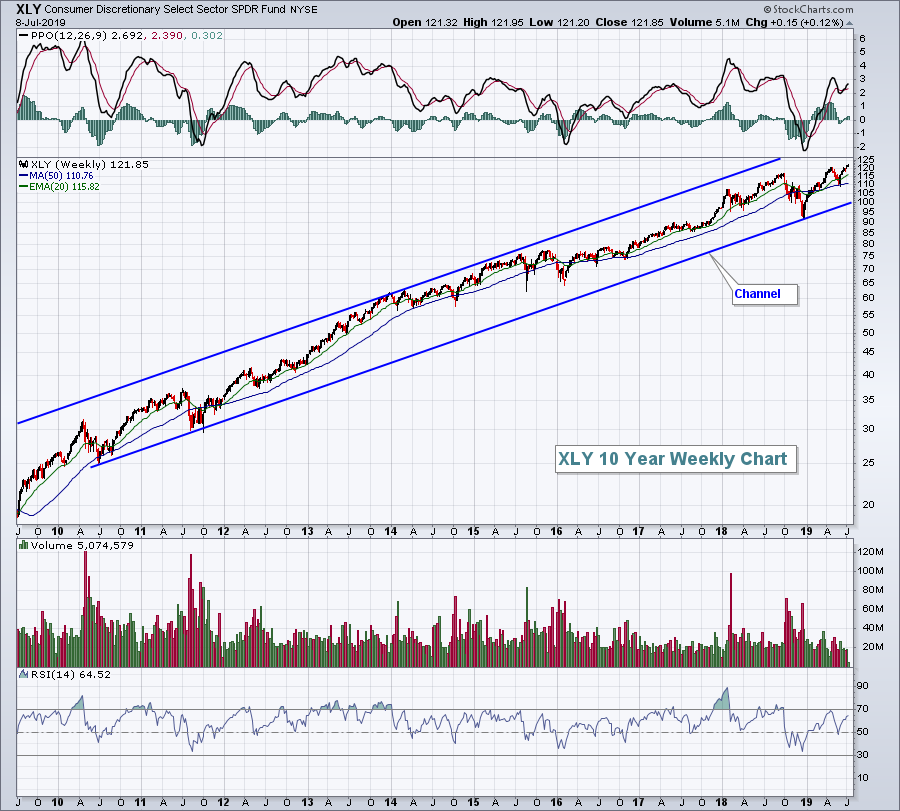 By dragging that exact trendline support to the top in 2013 creates a trend "channel" that I'd watch as we move forward.  The exciting part is that if this bull market accelerates, which I believe it will, the XLY could see a test of its upper channel line later in 2019 or in 2020.

Apple, Inc. (AAPL, -2.06%) is perhaps the most widely known stock in the universe and one of the most popular to own/trade.  Yesterday, Rosenblatt downgraded AAPL from Neutral to Sell, which certainly didn't help equities on the session, but it sent the stock down to approach its 20 day EMA for the first time in five weeks: 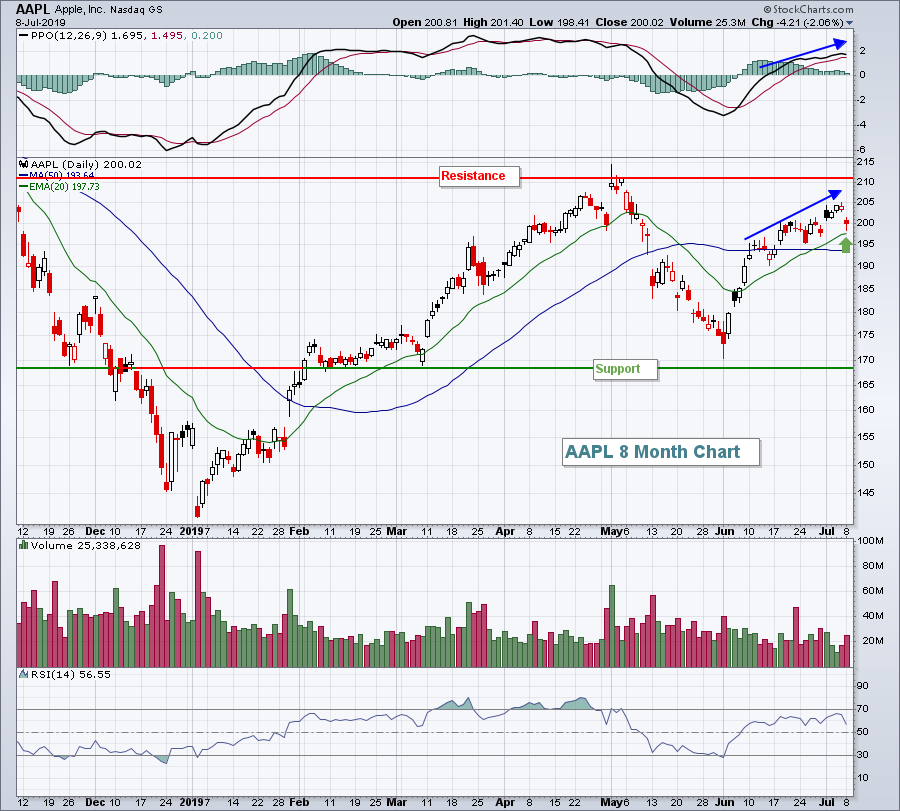 The PPO has continued to push higher, reflecting strong price momentum to the upside.  Typically, stocks with strong momentum like AAPL tend to hold their rising 20 day EMA on pullbacks.  We'll see if that's true this time.