The small cap Russell 2000 ($RUT, +0.22%) led bifurcated action on a very quiet Friday as many market participants were on an extended vacation spanning the July 4th holiday.  Strength was seen in financials (XLF, +0.28%) as the 10 year treasury yield ($TNX) jumped 10 basis points to 2.05%.  An increase in treasury yields typically has the effect of a strengthening net interest margin for banks ($DJUSBK, +0.78%), so it wasn't at all surprising to see that industry group outperform.  The jump in the TNX was the largest since the beginning of the year and comes on the heels of a positive divergence forming: 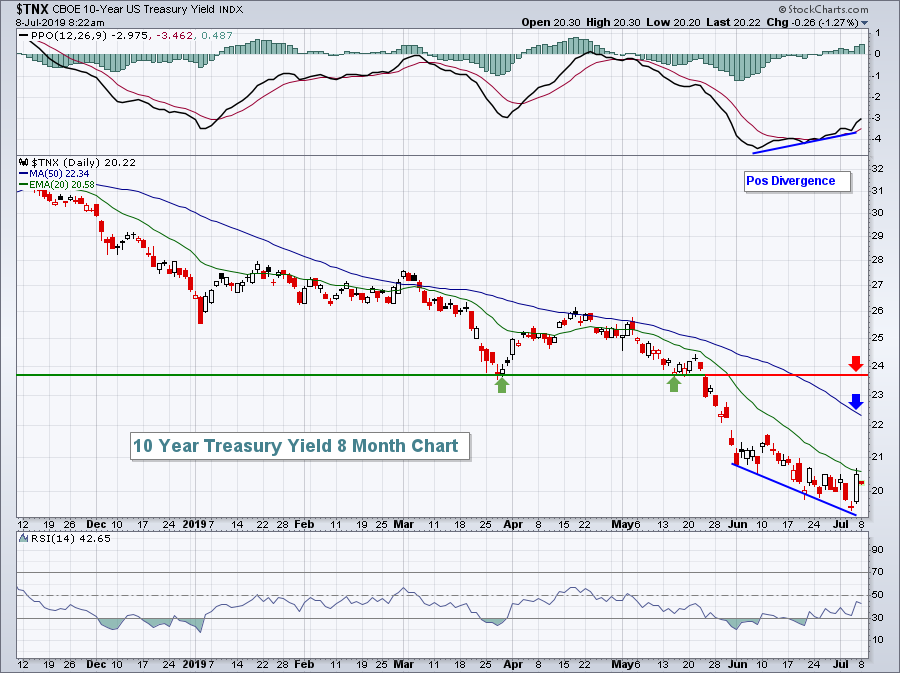 The initial attempt to move higher met resistance, as we might expect, at the 20 day EMA.  Given the positive divergence in play, however, I'm looking for a higher TNX to test its declining 50 day SMA and to "reset" the PPO back at or near its centerline.  We're seeing early weakness in the TNX this morning, but I believe we'll see that 50 day SMA test before we'll see a new TNX low.  If the TNX does move higher, it's possible we could test the double-bottom breakdown from May beneath prior yield support at 2.36%.  A move to that extent would be good news for equities as money rotating from the treasury market would likely land in U.S. equities.

After a disappointing jobs report in May, June's nonfarm payrolls came in well ahead of expectations on Friday morning and, on the surface, seemed like very good news.  But, of course, everyone looks at our financial markets as they would dominoes.  A stronger-than-expected jobs report immediately becomes "will the Fed lower rates in July?"  That made market participants a bit nervous and the stock market opened down significantly.  But it fought back the rest of the session, partly due to the aforementioned money rotating from the treasury market.

The 10 year treasury yield ($TNX) is giving back some of its Friday advance, falling 2 basis points to 2.02% this morning.  I still expect the Fed to cut the fed funds rate later this month, although the chances of a 50 basis point cut likely dwindled after the strong jobs report on Friday.

Asian markets were very weak overnight, but European markets are down just moderately.  Dow Jones futures seem to be taking their cue from Europe as they're down 77 points (-0.29%) this morning as we open a fresh week in 30 minutes.

The NASDAQ recently broke out of a bullish inverse head & shouldeers continuation pattern that measures to 8500.  The first step in realizing that measurement is breaking above its all-time intraday high of 8176.  Nonetheless, the recent action has been bullish, including the solid backtest of the recent neckline breakout: 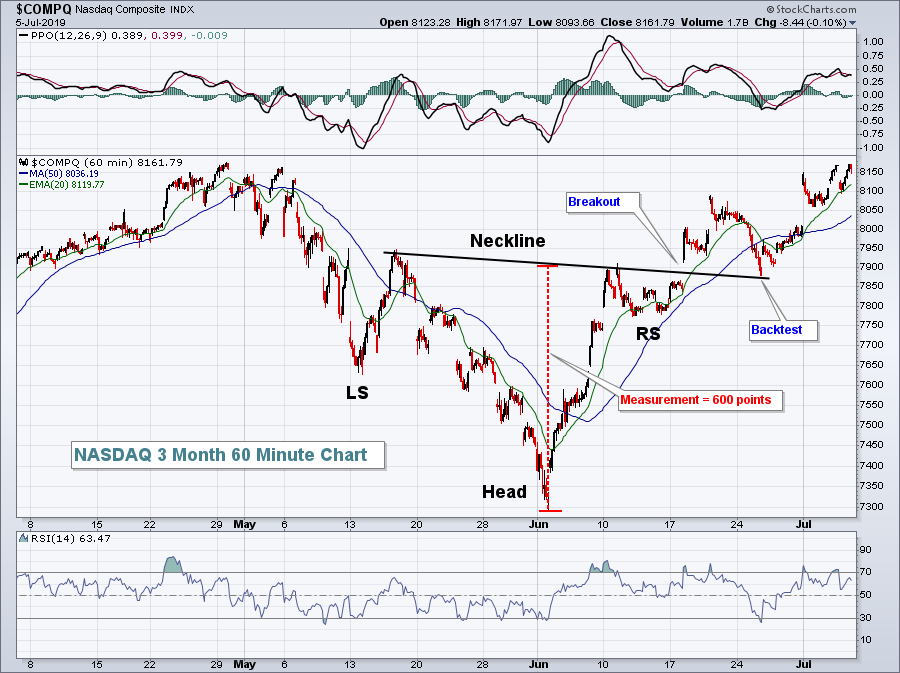 The NASDAQ represents an aggressive index so that area of the market breaking to all-time highs can only be construed as bullish confirmation.

Specialty retailers ($DJUSRS, -0.01%) rallied back on Friday after a slow start to remain in breakout territory.  It's notable because we had seen this group consolidating for more than two months in a cup with handle bullish continuation pattern since late-April: 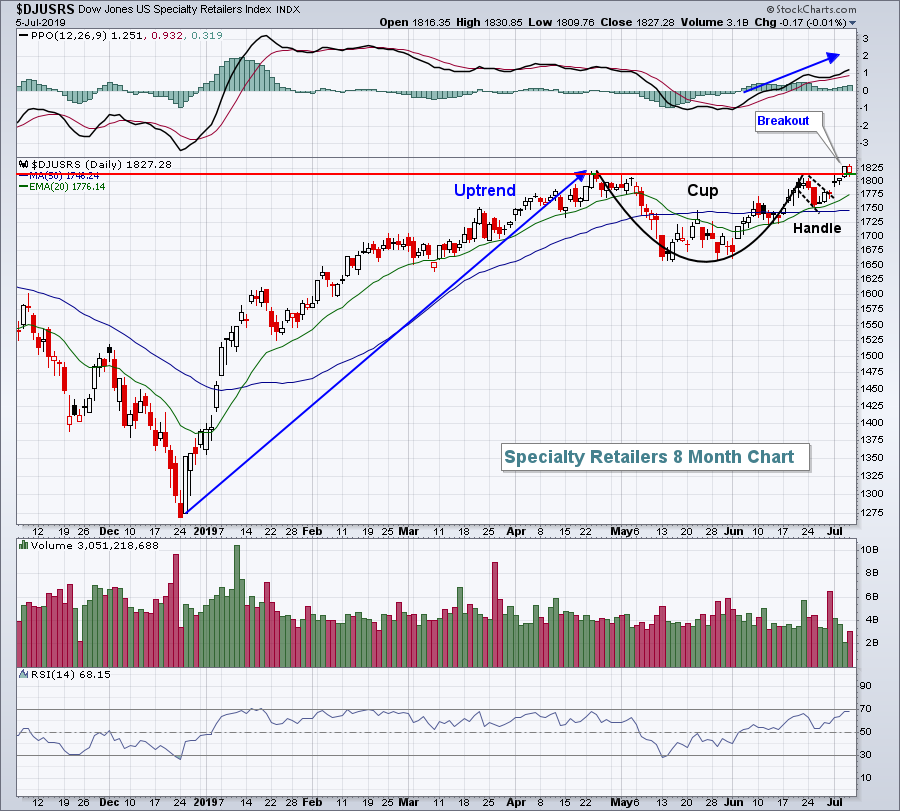 Knowing which areas are breaking out and outperforming might be more important than knowing the overall direction of the stock market.  It serves up great reward-to-risk trade candidates and you can trade with more confidence knowing that Wall Street supports your position.

Later this afternoon at 4:30pm EST, just after the market closes, I'll be joining EarningsBeats.com for a very important "2019 2nd Half Market Outlook" webinar where I'll not only discuss my views of market direction in the 2nd half of the year (and beyond), but I'll also highlight the industry groups that you need to focus on in the 2nd half.  Perhaps even more importantly, I'll disclose the industry groups you want to avoid.  Wall Street has a well-kept secret formula for outperformance and I'll shed some light on it.  I hope you can join me.

For my Monday setup this week, I'm going with an outperforming biotech stock that fell more than 2% on Friday.  It's Veracyte, Inc. (VCYT).  VCYT has been a leader among biotechs and the biotech group as a whole has performed very well historically during the month of July.  The Dow Jones U.S. Biotechnology Index ($DJUSBT) has risen 75% of Julys over the past 20 years, averaging a gain of 4.2% during the month.  That's by far the best calendar month for this industry group.  VCYT, meanwhile, is in a very bullish uptrend, significantly outperforming its industry: 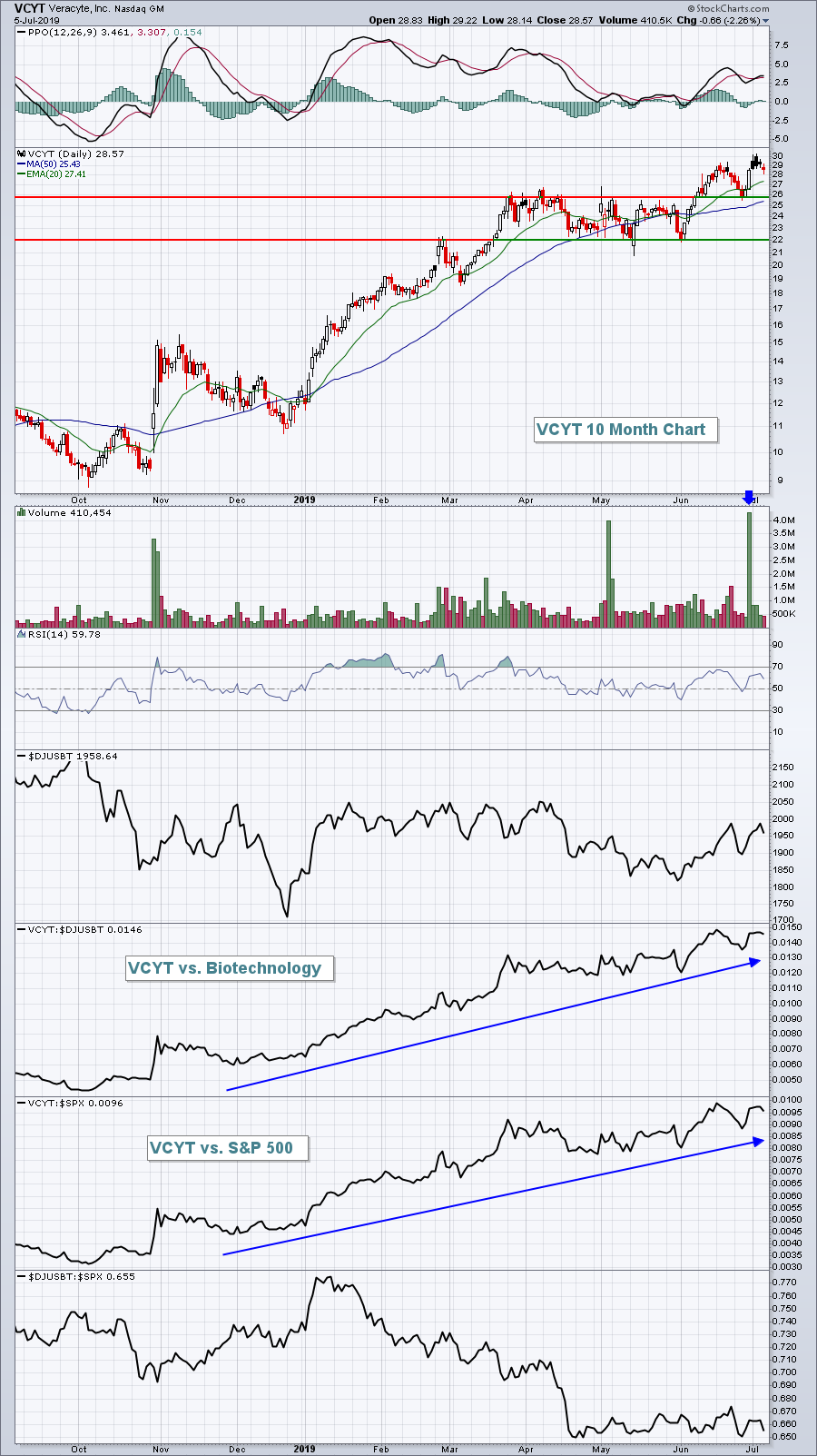 If money does begin to rotate into the biotechs throughout this month, VCYT seems to be a likely candidate to receive some of that money.

Cisco Systems, Inc. (CSCO) is off to a solid start in July, one of its best calendar months.  It's just 1% off its 19 year closing high of 57.05 and breaking above this level this month wouldn't be a surprise based on its July track record: 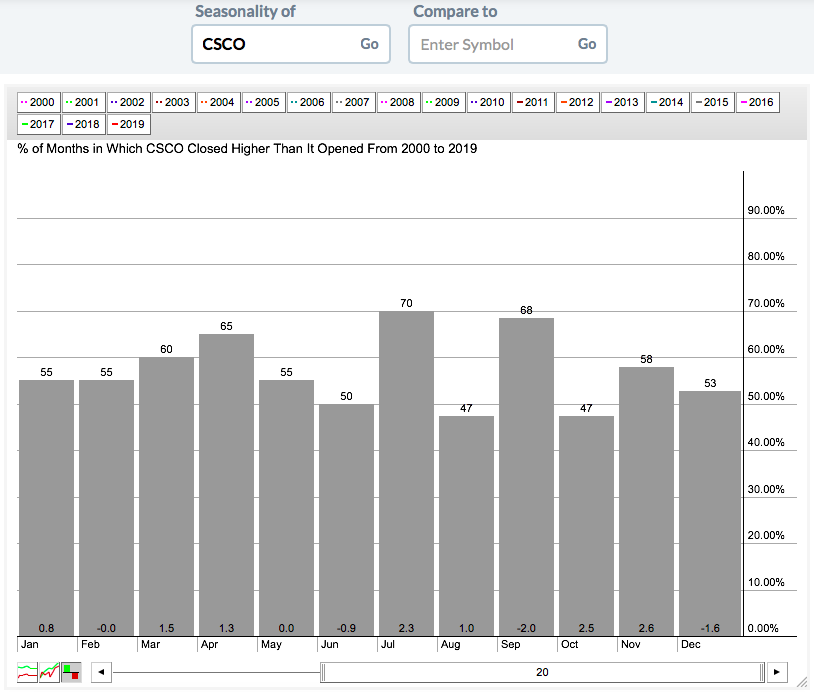