26 of 30 Dow Jones component stocks advanced as the most widely known stock index set all-time intraday and closing highs one day before Independence Day and during an abbreviated session.  It gives traders an extra day to relax and reflect on the Dow's climb to clear its previous all-time high set on October 3rd, 2018.  The Dow Jones rose 0.67% to close just beneath the 27000 level.  Meanwhile, the S&P 500 gained 0.77% to end the session at 2995, threatening to clear an important psychological level at 3000 and also closing at an all-time high.  The NASDAQ hasn't yet reached its intraday record high of 8176, but it did close at 8170 which is its new all-time record high close.

Perhaps the best news from Wednesday was that all 11 sectors advanced.  Wide participation during bull market advances is a confirming signal.  The two primary themes of the advance to record territory, however, were defensive and consumer names.  Real estate (XLRE, +1.44%) jumped after recently holding its rising 50 day SMA: 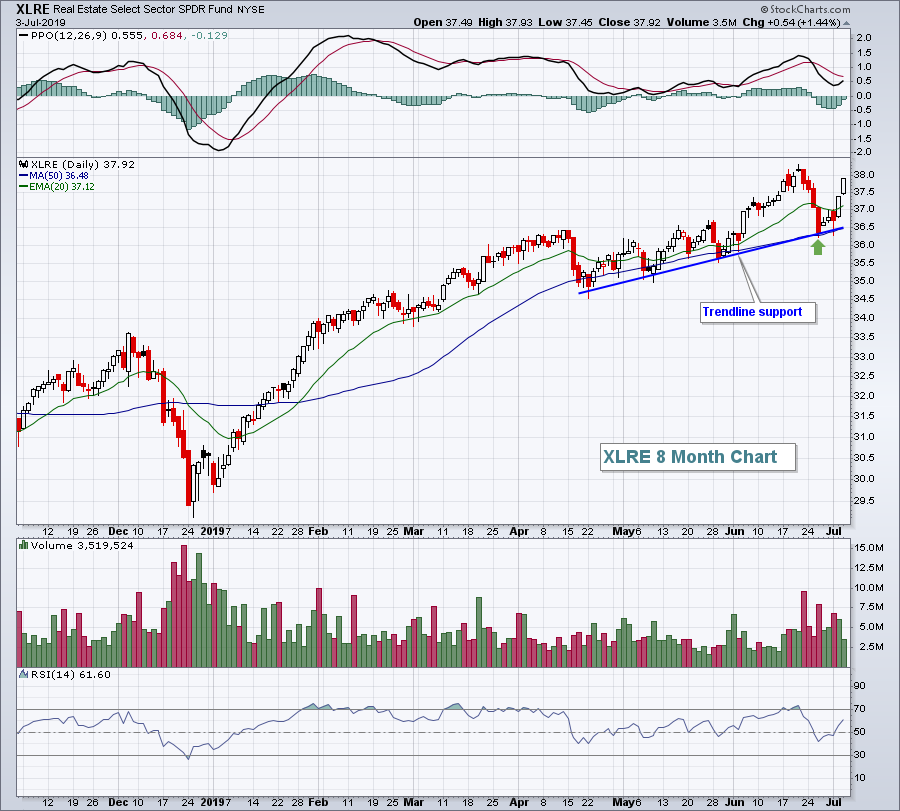 Perhaps the most bullish move yesterday was made by consumer discretionary stocks (XLY, +0.87%) as we received further confirmation of the group's cup with handle breakout: 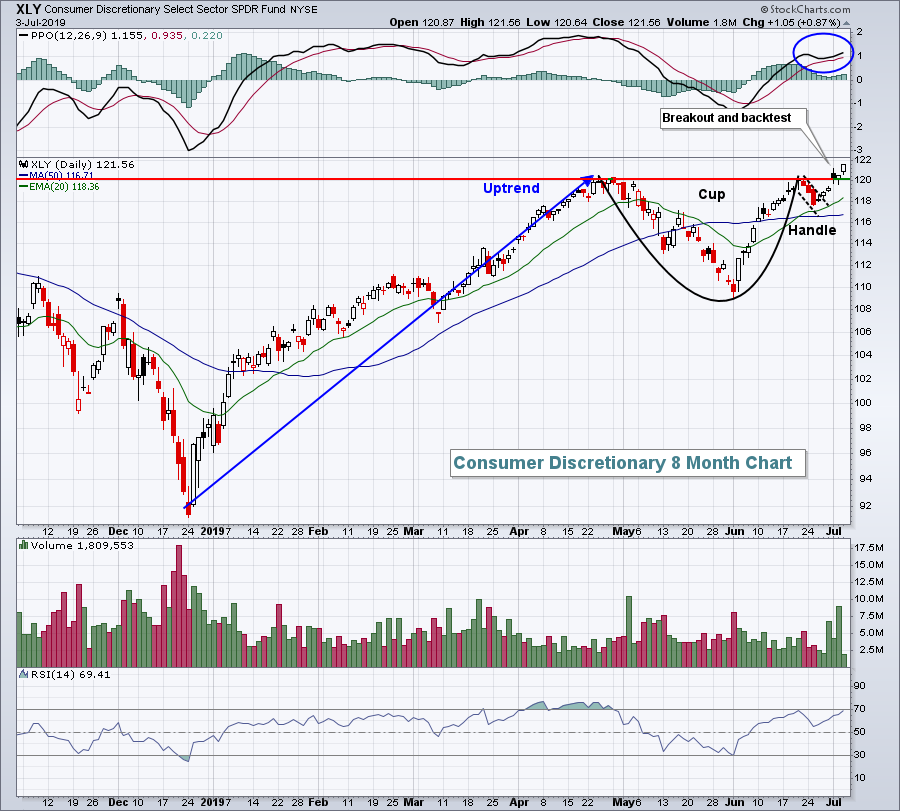 The volume confirmed the breakout, then we pulled back to test the breakout level successfully.  Yesterday, we saw another advance into record high territory.  The relative strength of aggressive sectors is reviewed in the Current Outlook section below and is one of the reasons why I believe this bull market party has just begun.

Consumer staples (XLP, +1.24%) actually outperformed their discretionary counterparts and also closed at an all-time high.  How folks can remain bearish when we're seeing all-time highs all around us in the face of adversity and bad news is beyond me.

Gold ($GOLD) and crude oil prices ($WTIC) are both lower this morning, while a selloff in treasuries has sent the 10 year treasury yield ($TNX) rising 4 basis points to 2.00%.  June nonfarm payrolls came in well ahead of estimates, which is a good thing after the big unexpected drop in May.  Short-term, however, Dow Jones futures turned a bit lower as a stronger-than-expected jobs report is likely seen as an obstacle to a Fed rate cut later this month.  Personally, I don't believe it will change the Fed's stance.

Overnight, Asian markets were mixed.  Meanwhile, European indices are seeing some profit taking.  The German DAX ($DAX) broke out of a bullish cup with handle continuation pattern to open July.  A pullback to test the breakout level and/or the 20 day EMA would be fine technically.  Here's the chart: 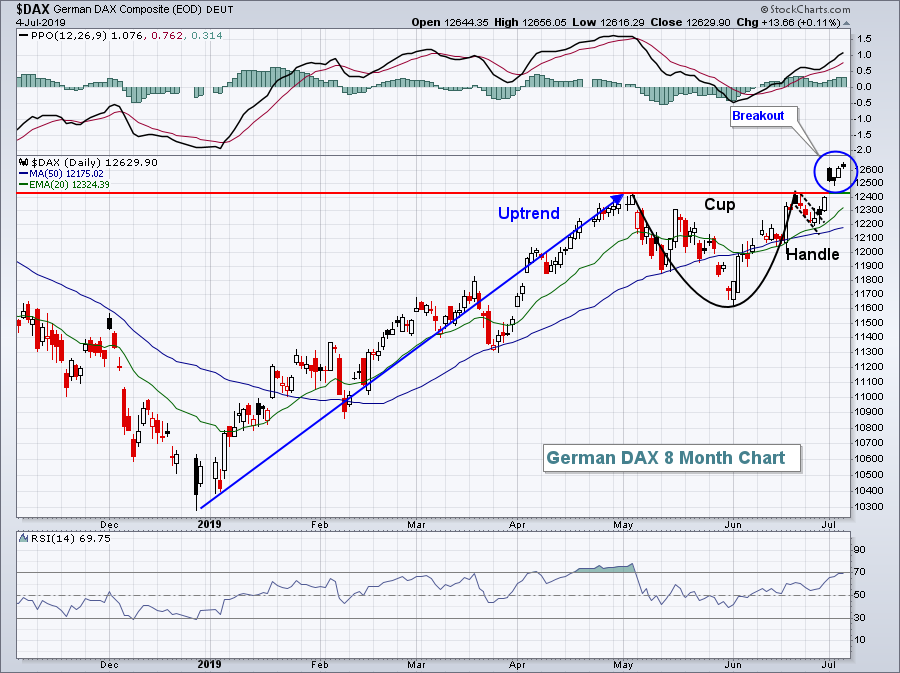 This chart is as of Thursday's close.  This morning, the DAX is down by 42 points.

Dow Jones futures are lower by 86 points as we approach today's opening bell.  It's likely to be a very light volume Friday to end the first week of July as many market participants will be on vacation.

The relative performance of aggressive sectors remains strong as each of the five remain in an uptrend in my opinion.  Bull markets require risk taking for sustainability and rising relative ratios among aggressive areas provides us that signal:

In long-term financial terms, the risk of missing a bull market advance is a bigger risk than riding a bear market lower.

I'm joining John Hopkins, President of EarningsBeats.com, for a webinar on Monday at 4:30pm EST to discuss my 2nd Half Market Outlook.  I'll cover many industry groups, including those you want to be trading and also those that you really want to avoid.  CLICK HERE for more information.

The Dow Jones U.S. Apparel Retailers Index ($DJUSRA, +2.01%) had a very strong day on Wednesday and is part of a consumer discretionary sector that set another all-time high.  But the question here is.....should we trust the advance and should we invest in the group? 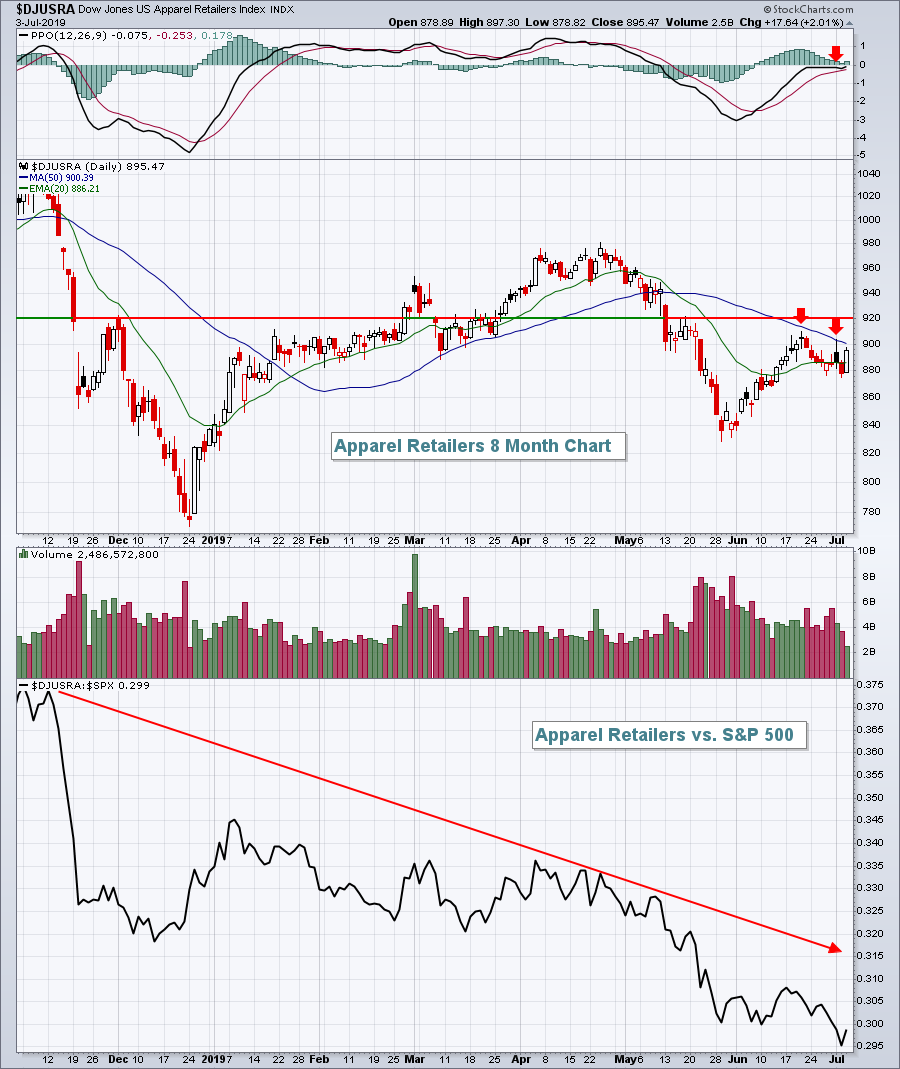 The trend is your friend.....unless it's a downtrend.  Look at that relative strength line.  If the S&P 500 goes up 20% and you're investing in a stock that's part of an industry group that's climbed 5% over the same period, is that a wise investment?  I don't think so.  Therefore, the answer to my question above is NO.  The DJUSRA has a very damaged technical chart and there are no current signs of anything changing near-term.  At a minimum, I'd need to see the DJUSRA clear a key pivot level and price resistance at 920.  And that's just a start.  I'd also want to see a much different relative strength picture.