I saw a headline Tuesday morning when all of our major indices were lower that suggested "renewed trade fears" were impacting the stock market in negative fashion.  When will the insanity stop?  So Monday the market moved higher on trade relief and Tuesday it was lower on renewed fears?  Whatever.....that's why listening to the media is a really bad idea.  Follow the charts.  Money is rotating into treasuries here in the U.S. and globally.  Trade squabbles are everywhere.  Gold ($GOLD), another asset class, recently surged to highs not seen in six years.  Despite all the negativity, the S&P 500 rose 0.29% on Tuesday to close at a fresh all-time high.  Think about that.  Imagine what might happen if money actually began rotating from treasuries to equities around the globe.  I have and I'm excited about it. 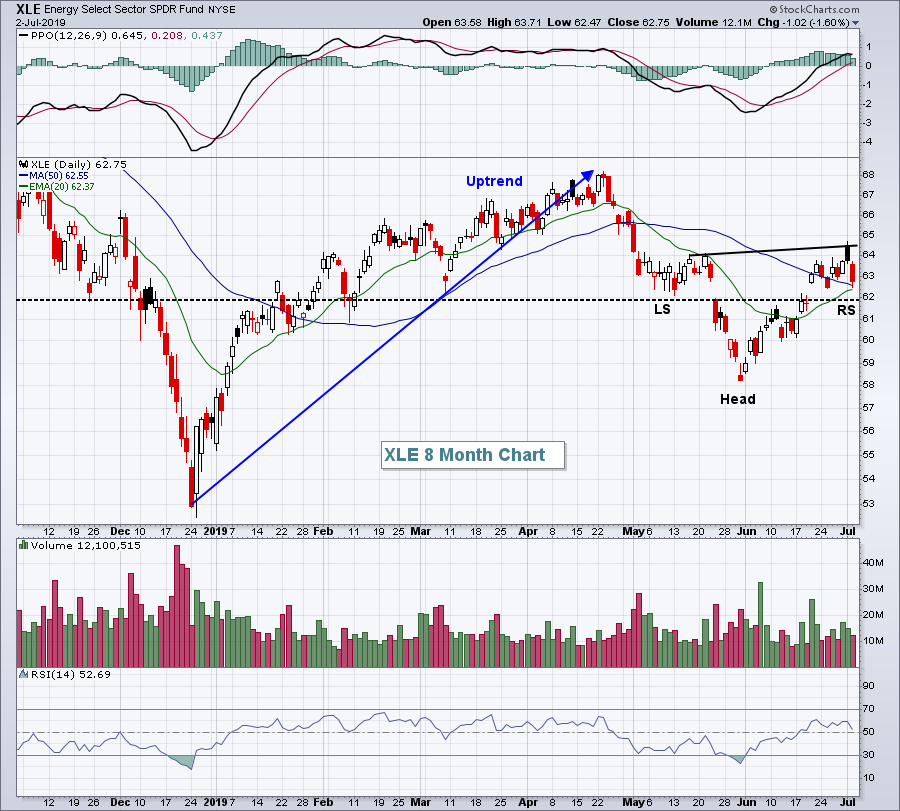 If the XLE can move back to clear the July 1st high, it would be a very bullish breakout.  But that will likely require stability in crude oil prices ($WTIC), something the group hasn't enjoyed the past 2-3 months.

The 10 year treasury yield ($TNX) continues its descent, falling two basis points this morning to 1.96%.  Crude oil ($WTIC) is bouncing back a bit today after a very rough session on Tuesday.  The WTIC is higher by 0.78% to trade at $56.69 per barrel, quite a bit lower after testing $60 per barrel recently.

We saw weakness in Asia overnight, but Europe is green this morning.  That latter strength is carrying over here in the U.S., with Dow Jones futures higher by 47 points as a new trading day approaches.

The S&P 500 is setting all-time highs with money rotating INTO treasuries.  That's impressive and supports my notion that equities will soar when money actually begins to rotate away from treasuries.  That's also the history of the stock market.  We tend to see very strong gains in the S&P 500 when the 10 year treasury yield ($TNX) is rising: 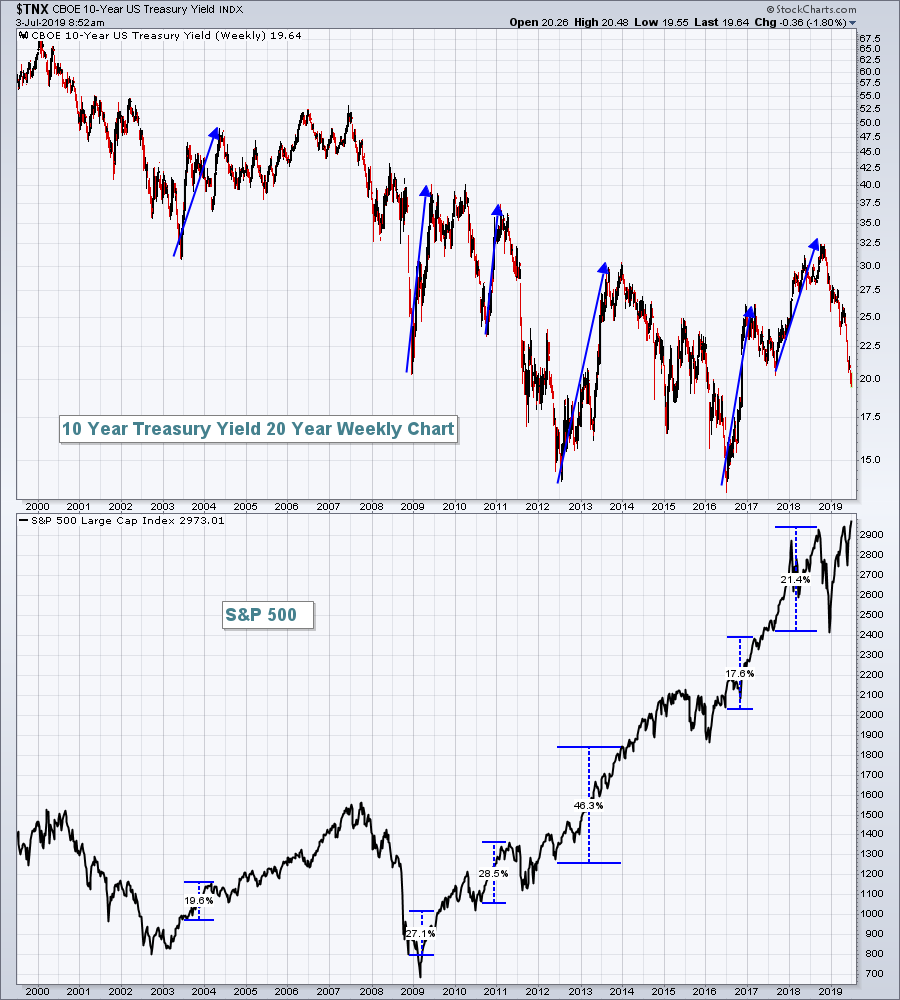 The stock market is already showing us that it can rally with falling treasury yields.  However, the path has been extremely volatile.  When money flow is in the opposite direction, though, the rotating dollars from treasuries to equities generally results in a powerful surge in the S&P 500 as you can see from the above chart.  I believe the TNX will turn back higher over the intermediate-term, although we could see a further drop in the near-term.

I see the S&P 500 moving much, much higher over the next couple years.  It's just my opinion.

Here is a reprint of a chart that I provided a week or so ago on the Dow Jones U.S. Toys Index ($DJUSTY, +0.82%).  It's been showing more bullish signs, but we hadn't yet seen an absolute or relative breakout.  Well.....that's changing: 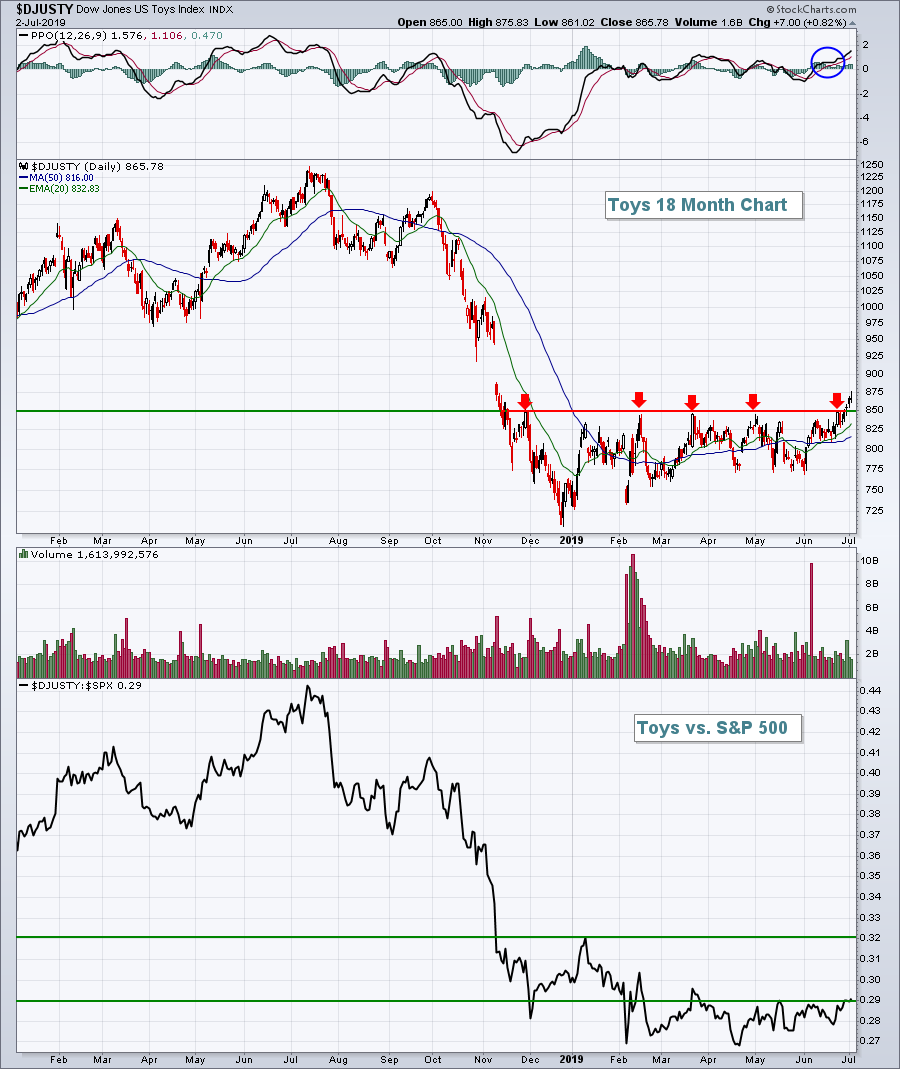 The PPO has continued to climb, we've now cleared the May relative high, and the key price resistance in the 840-850 range is now in the rear view mirror.  While I wouldn't annoint the DJUSTY as the best industry group to trade, we're beginning to see confirming signals that the worst is behind the industry.

The Dow Jones U.S. Water Index ($DJUSWU) enjoys the summer time.  While July is just so-so vs. the S&P 500, the months from June through September represent a solid period of relative performance overall.  Check out the summer's "relative" returns of the DJUSWU vs. the S&P 500: 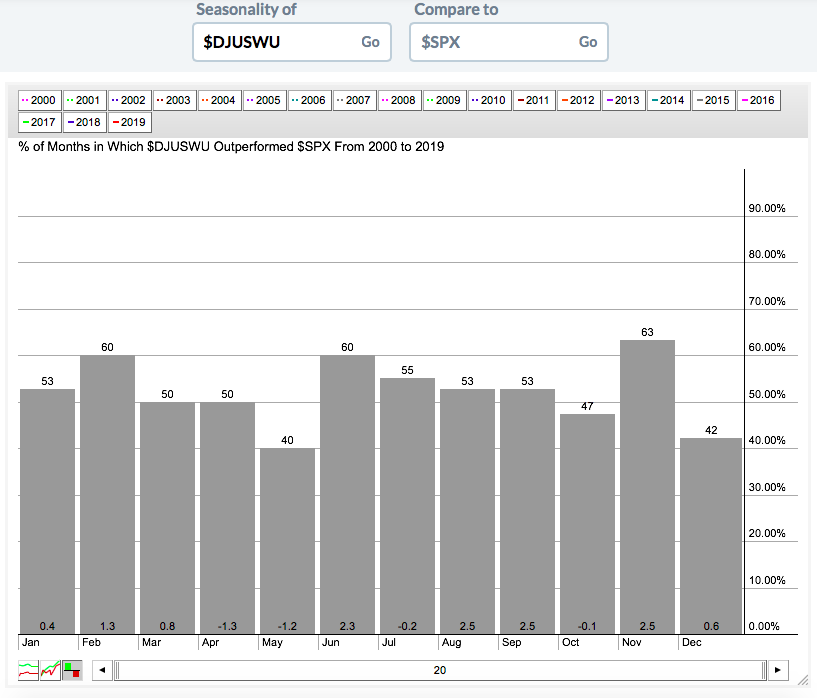 The DJUSWU averages outperforming the S&P 500 by more than 7% from June through September over the past 20 years.