The S&P 500 ($SPX, +0.45%) surpassed 3000 on an intraday basis for the first time in history on Wednesday, although it failed to close there.  Permabears don't understand how this is even possible, with the ongoing trade war and all.  But let me remind everyone of one very important stock market rule.

Fed Chair Jerome Powell testified before Congress yesterday and effectively communicated that the Fed would lower rates at the end of this month.  I'm paraphrasing obviously, but the bond market has now baked in a 100% chance of a rate cut.  The Fed strives for transparency, so anything other than a rate cut at its July meeting will send shockwaves throughout the financial markets.  Mark it down.  The Fed will lower the fed funds rate later this month.

That testimony was one more bullish piece of the puzzle that the bulls took advantage of.  Futures immediately turned from red to green on Powell's testimony.  It wasn't a trend day as many might expect, but it's never easy to waltz through a major psychological level like 3000.  Give the S&P 500 time.  We're going through, whether it's today, next week or next month.  It's happening.

All of our major indices rallied and a large majority of our sectors did as well.  Strength was notable in energy (XLE, +1.28%) as crude oil prices ($WTIC, +4.50%) broke above a very important pivot level at $60 per barrel: 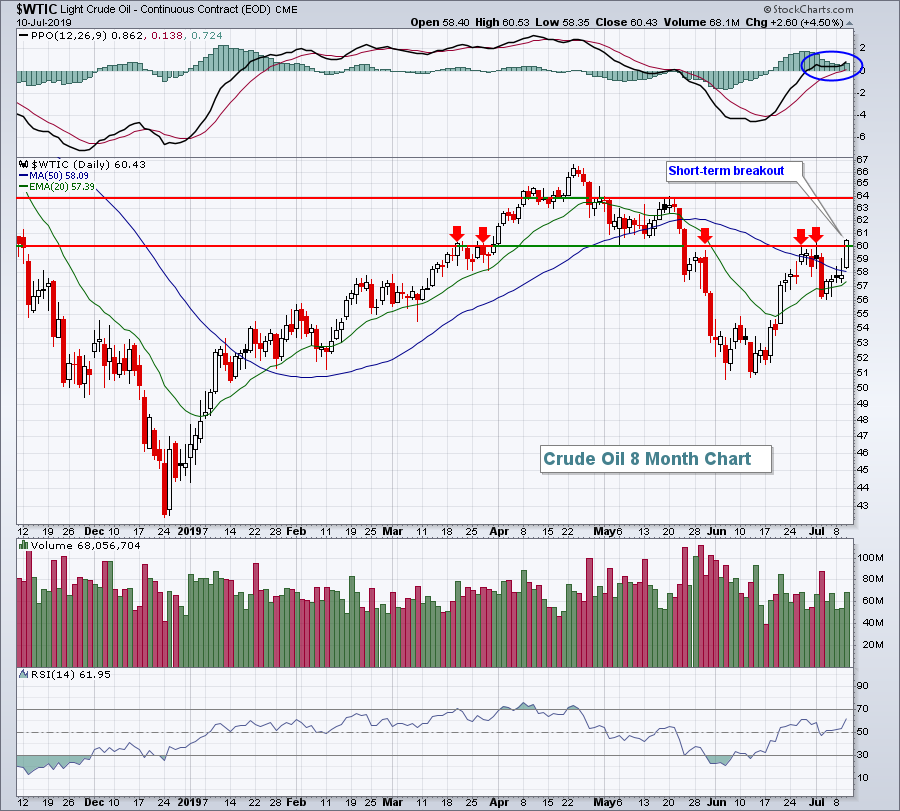 I would now consider the rising 20 day EMA to be very solid support as we move forward with a short-term target on crude of $64 per barrel to test the reaction high in mid-May.

In a very important development, the 10 year treasury yield ($TNX) continues to strengthen this morning, rising 3 basis points to 2.09% after closing above its 20 day EMA yesterday for the first time in 10 weeks.  A rising TNX means money is rotating away from bonds, a staple during large S&P 500 rallies.  Crude oil ($WTIC) is flat this morning, consolidating after a huge advance on Wednesday to close above $60 per barrel.

Asian stocks were higher overnight, while European markets are slightly lower this morning.

Dow Jones futures are higher by 91 points with 30 minutes left to the opening bell.

The relative performance of transporation stocks vs. utilities stocks ($TRAN:$UTIL) has a very strong positive correlation to the direction of the benchmark S&P 500.  It makes good common sense because the S&P 500 should trek higher when economic conditions are strong or strengthening.  During such periods, transports should be delivering more goods and, hence, their share prices should rise.  Also during economic expansion, the Fed must monitor the strength of such activity, while keeping a lid on inflation.  To do so, the Fed usually tightens its monetary policy and higher interest rates result, putting pressure on defensive utilities.  The following chart illustrates (1) the impact the TRAN:UTIL ratio has on overall market performance and (2) the positive correlation typically seen between the direction of the TRAN:UTIL and the direction of the S&P 500: 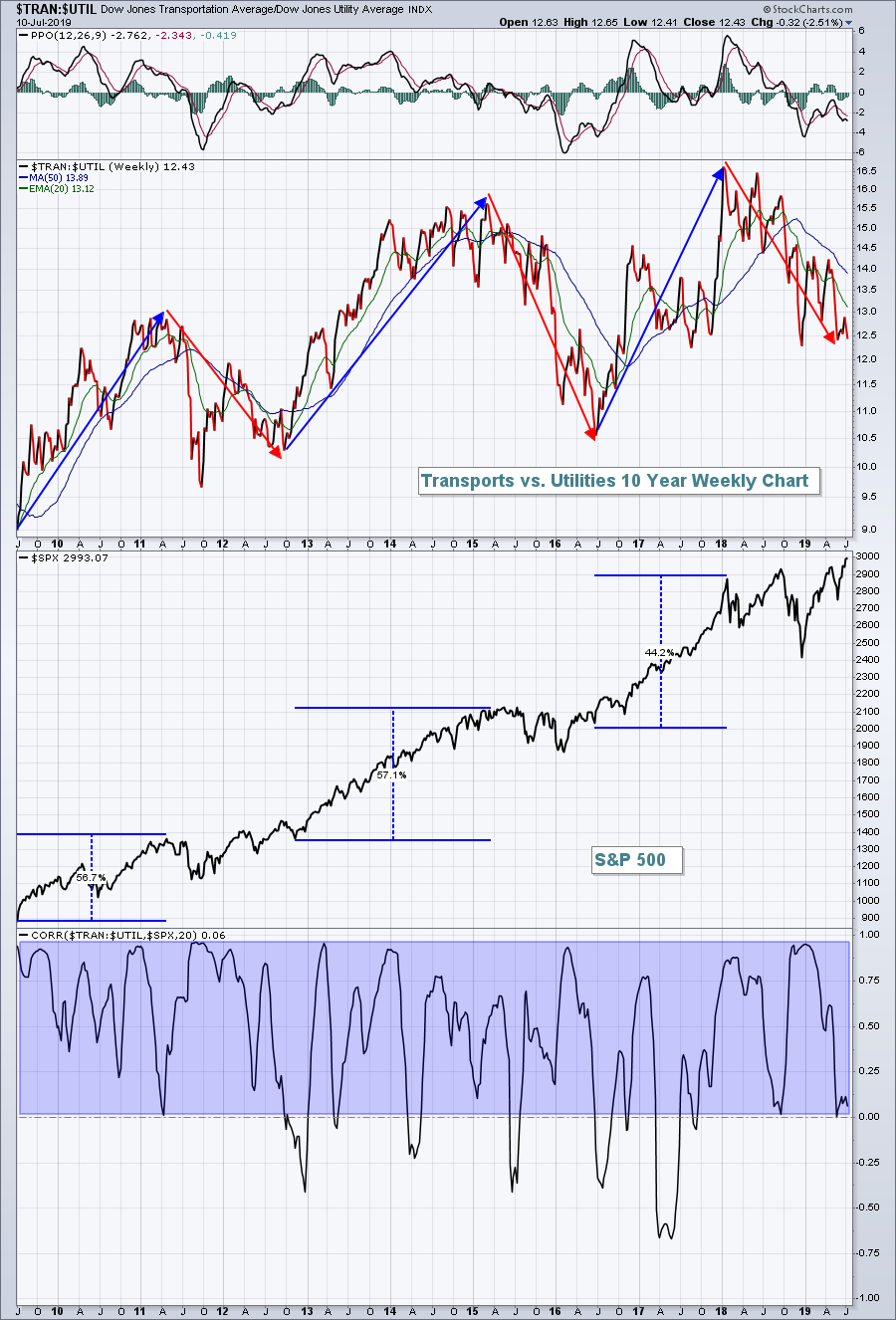 The blue-shaded area at the bottom of the chart shows how highly correlated the S&P 500 and the TRAN:UTIL are.  We occasionally see an inverse correlation develop between the two, but it doesn't last long and then we move back to strong positive correlation.  Next, check out the S&P 500 rallies when the TRAN:UTIL ratio is uptrending.  It's impressive to say the least.  When this ratio downtrends, upside in the benchmark is thwarted.  We've been downtrending in this TRAN:UTIL ratio for 18 months, nearly equal the length of the two prior downtrends within the current bull market.

I believe we'll see a strengthening of economic conditions later this year and into next because of accommodating central bankers across the globe.  They continue to support policies that are quite conducive to improving economic strength.  Improving economic conditions in a low interest rate environment is nirvana for equities.  I see that goldielocks scenario evolving for global equities.  One technical development to watch for is a new uptrend in this TRAN:UTIL ratio.  If and when that occurs, don't fight it.  It will represent a very bullish confirmation.

One big problem in the U.S. stock market during this rally is that transportation stocks ($TRAN) continue to underperform the benchmark S&P 500.  The biggest moves during bull markets typically occur with transports rallying strongly.  Railroads ($DJUSRR) have been solid, but airlines ($DJUSAR) and truckers ($DJUSTK) have not.  The latter group, while looking not-so-good since its mid-Q1 2019 high, actually provides a lot of hope on its longer-term weekly chart: 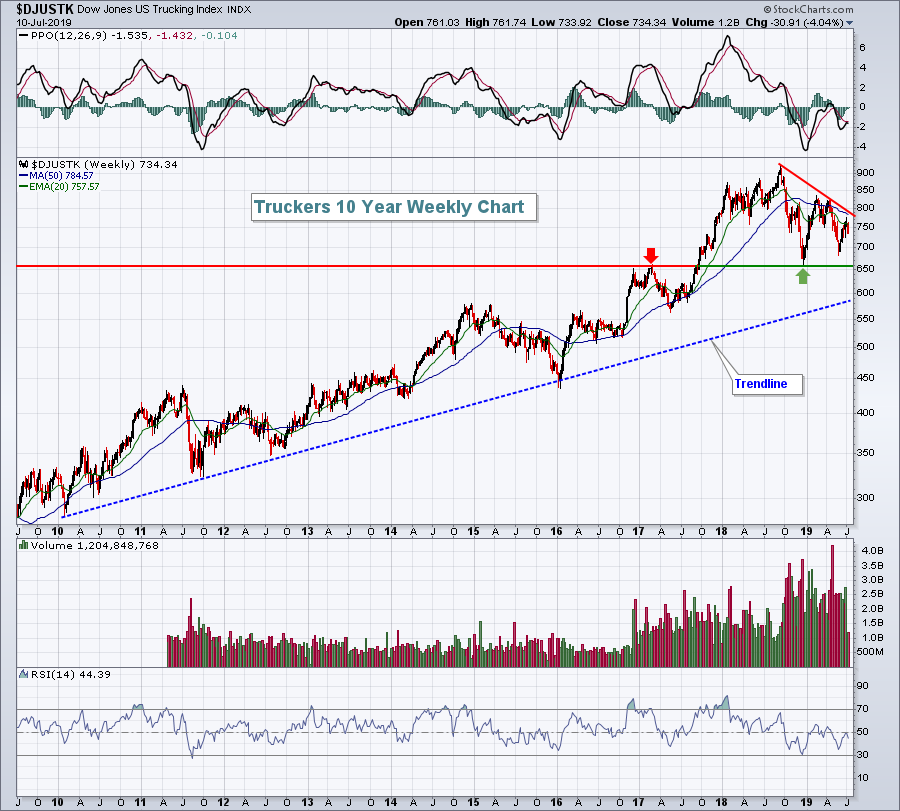 There is absolutely more downside possibility here, as I wouldn't feel completely bullish until the DJUSTK clears the 800 level.  But when you step back and look at the big picture, I think it's clearer that truckers simply made a huge move higher that it's currently consolidating.  Another move below 700 really increases the reward-to-risk opportunities in this area.

Yesterday, I provided the NASDAQ's annualized returns (since 1971) for this week and next, illustrating the huge disparity.  Today, let's take a look at this disparity on the S&P 500 (since 1950):