All eleven sectors advanced on Monday as U.S. equities staged a rally following Friday's selloff. It wasn't overly impressive in my view as most of the gains came at the opening bell. There wasn't much follow through, suggesting perhaps more manipulation than anything else. The Volatility Index ($VIX, -2.77%), while finishing lower on the session, was stubbornly higher during most of the trading session and that's indicative that fear remains high. That can be an ingredient for a rapid selloff so we need to remain on guard.

Communication services (XLC, +1.50%) and technology (XLK, +1.39%) were the top two performing sectors, which was a bullish takeaway as aggressive areas of the market were bought. Within the former, broadcasting & entertainment ($DJUSBC, +2.02%) rallied nicely as DISH Network Corp (DISH, +3.93%), Charter Communications (CHTR, +2.92%), and Walt Disney (DIS, +2.23%) helped to lead the group. DIS, in particular, was nearing a key price support zone: 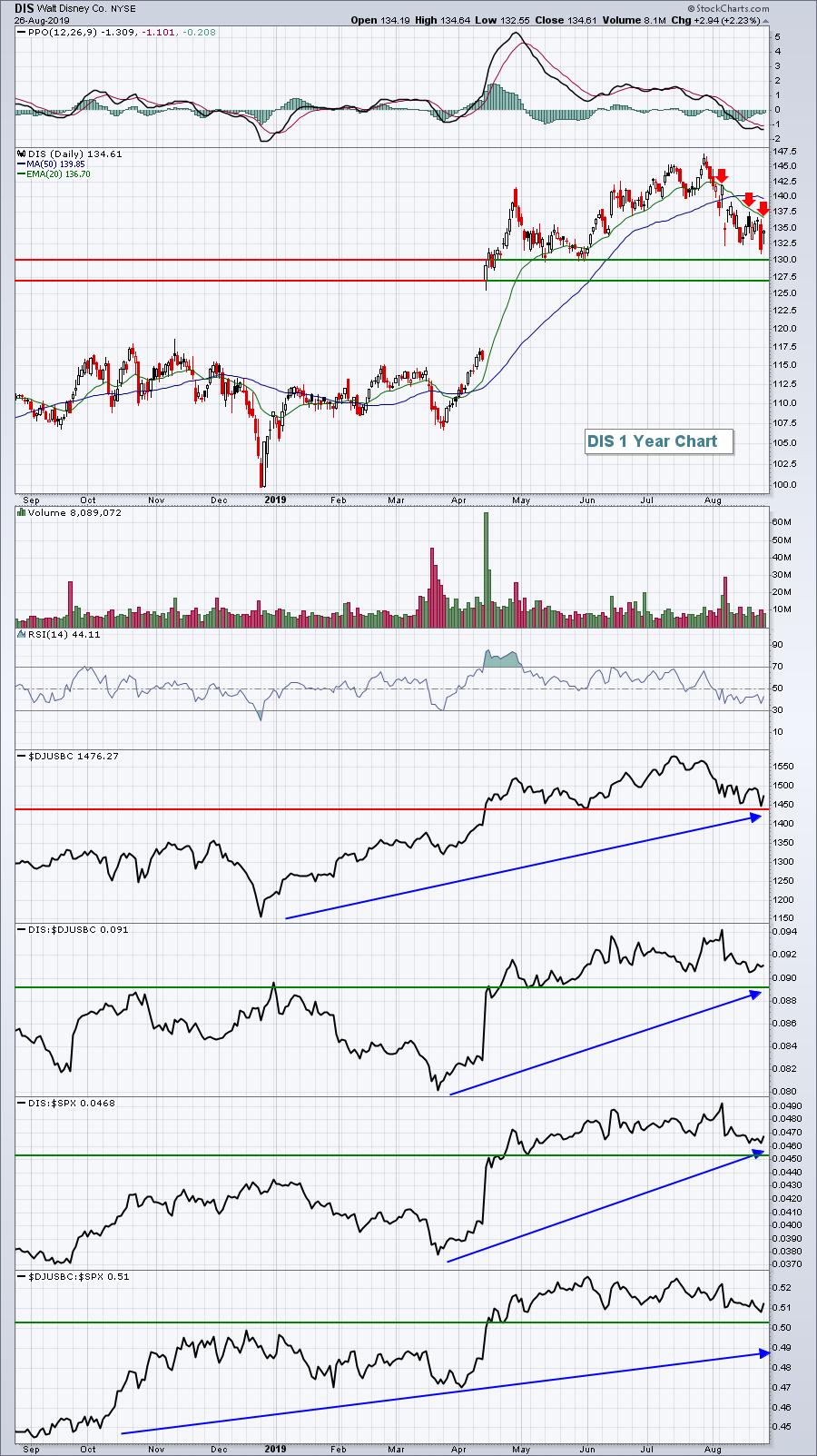 Overall, DIS is not a bad looking chart. There's been a lot of consolidation since the huge move higher in April, but that's simply establishing a nice base. DIS continues to trade fine on a relative basis and its peers are performing well. It's likely just a matter of time before we see further strength here.

Materials (XLB, +0.33%) and energy (XLE, +0.43%) finished higher, but once again lagged the overall market action. This has been an 8 year theme and, based on the U.S. Dollar ($USD) outlook, I don't see it changing any time soon. More on this in the Sector/Industry Watch section below.

Crude oil ($WTIC) is up more than 1% this morning, potentially providing a boost to the beleaguered energy sector. The 10 year treasury yield ($TNX) is once again under pressure, falling 4 basis points to 1.50%. It's going to be extremely difficult for the U.S. stock market to do anything but consolidate with treasury yields under pressure.

Asian markets were mostly higher overnight and the German DAX ($DAX) is higher by 0.75% this morning in Europe. That's aiding U.S. futures as the Dow Jones is up 85 points in pre-market action....with 45 minutes left to the opening bell.

Those thinking we're heading for a bear market are badly misled - in my opinion. It's easy to think we're starting a bear market. Watch CNBC for an hour. The sky is falling. Of course I could be wrong, but this market is not set up for a bear market. I just don't see it. Record low unemployment, respectable job growth, low interest rates, accommodative central bankers? And THAT is going to drive equity prices lower? I think we're in a very similar position to 2016 where we consolidated, had a quick false breakdown, then exploded higher. I see a similar market later this year and into 2020. Relative strength cannot be overemphasized nor overstated. When we're at or near major tops, money rotates to defense and the relative breakdowns are obvious as the market sells off. Check out this chart:

Focus on those red, black and blue vertical lines. They mark important points in time when the stock market was quite vulnerable. In 2007, smart money was "heading for the hills", as money poured out of aggressive sectors. Look at those red circles. Consumer discretionary and financials were absolutely horrific on a relative basis vs. the S&P 500. Do you see the difference in 2016? Lots of folks were screaming bear market then, weren't they? December 2018 was the same song, a different verse.

Technology and consumer discretionary, two of the most aggressive sectors, are the only sectors that have broken to new all-time highs.

Then look at those black arrows that mark recoveries on the S&P 500. In 2008, the bounce never cleared the prior high and relative strength in the aggressive sectors never pushed to new relative highs. In 2016, the relative strength really never wavered. We're seeing the same thing in 2019.

The U.S. Dollar Index ($USD) remains in a long-term uptrend and that's kept the lid on energy and materials on a relative basis: 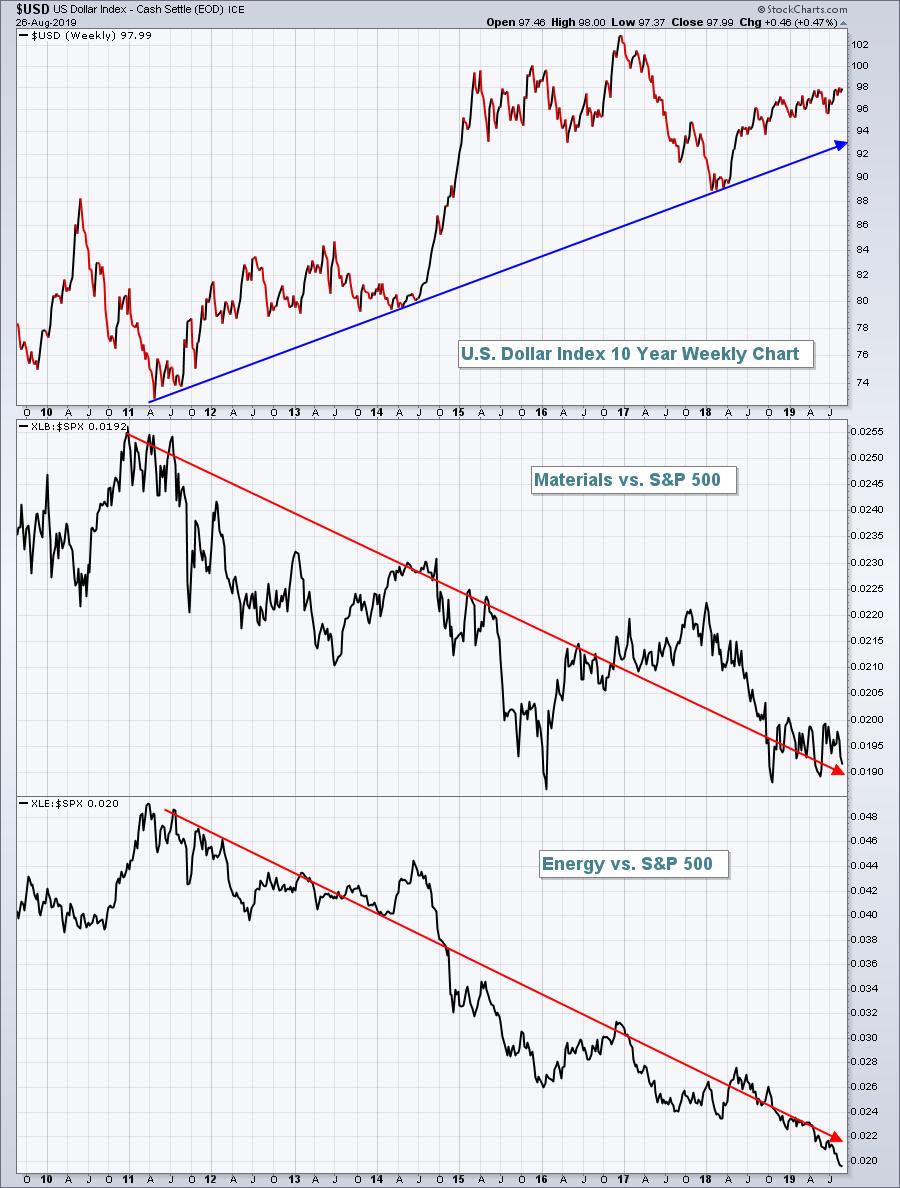 Value investors have been screaming about the unlocked jewels in these two sectors for a long, long time. I don't know where the bottom is and, quite honestly, I don't care. All I know is that these two groups remain out of favor and the USD remains in an uptrend. Until that changes, stick with relative strength, not weakness.

3x a week, our EB Digest at EarningsBeats.com covers various relative strength topics, mostly pertaining to companies having just reported earnings, or preparing to report earnings. Tomorrow morning I'll be writing about a company that is getting set to report blowout earnings - at least in my opinion. To check out the company and to receive these articles free of charge, CLICK HERE to sign up. It only requires a name and email address. Thanks for your support!

Consumer staples stocks (XLP) have proven to be excellent relative performers during the historically bearish month of September. Here's how the XLP has performed relative to the benchmark S&P 500 over the past two decades: 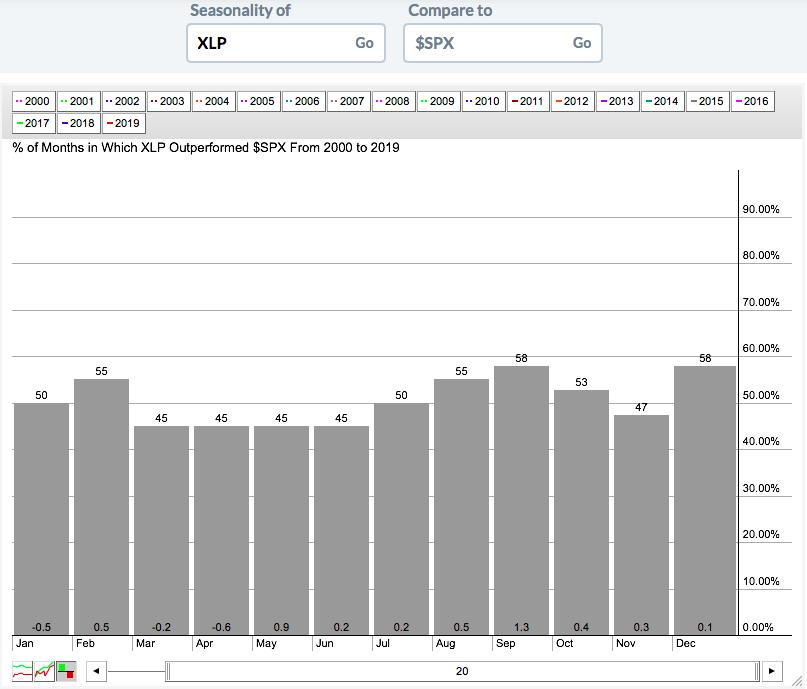 It's outperformed nearly 60% of Septembers and its average outperformance has been 1.3%, higher than any other month. Owning solid consumer staples names that show relative strength to the XLP isn't a bad strategy during what can be quite a volatile month.