It was a solid day for U.S. equities as all of our major indices rallied, as did all 11 sectors. Communication services (XLC, +1.94%) and technology (XLK, +1.71%) were the top two performing sectors. Broadcasting & entertainment ($DJUSBC, +2.12%) recently held key price support and is bouncing, led by Comcast's (CMCSA, +3.74%) breakout on Wednesday: 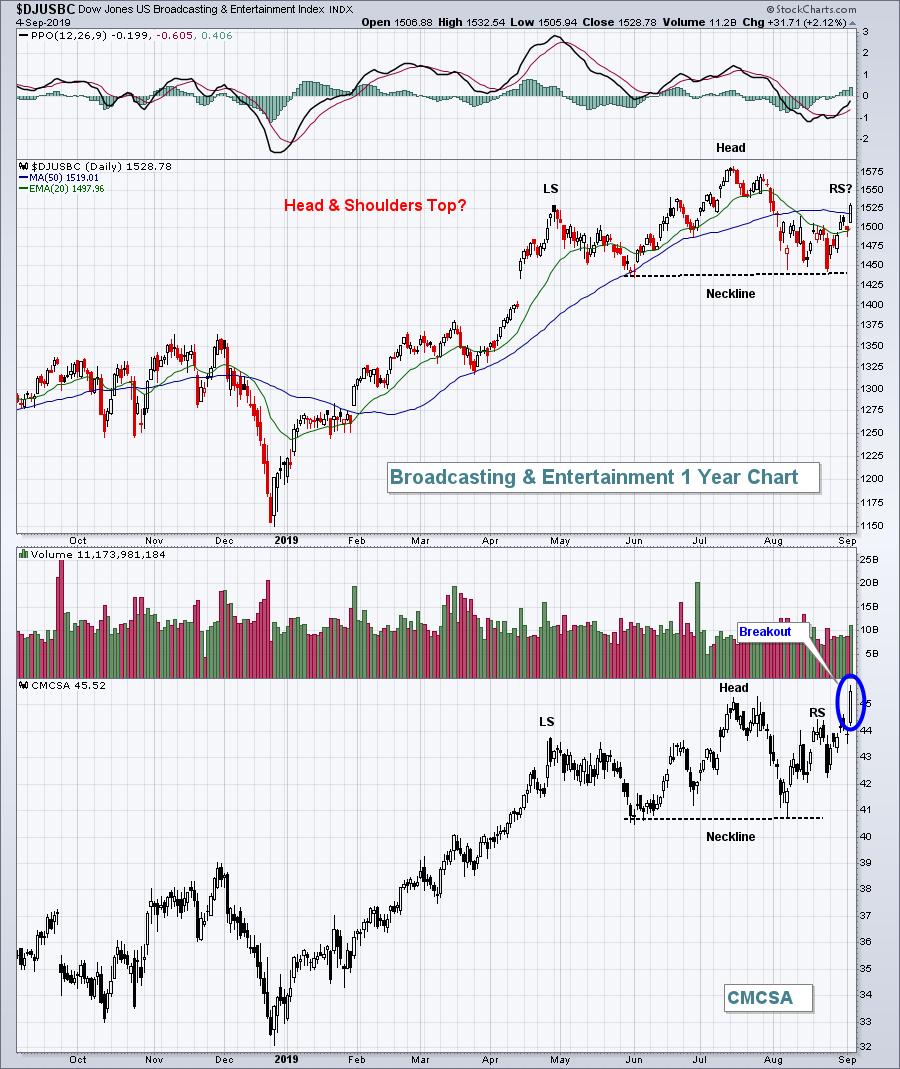 The DJUSBC remains quite bullish in my view and has been a solid relative performer, as illustrated in the Sector/Industry Watch section below.

Gold ($GOLD) is down more than 1% as the 10 year treasury yield spikes 7 basis points to 1.53%. The jump in the TNX should help to bolster financials (XLF), which are near a 1 year relative low vs. the benchmark S&P 500.

I've posted this quite a bit over the past month, but it's worth posting again. The S&P 500 has been mired in a wide and volatile trading range for the past month. Today appears to be the day that we'll trade outside this range (and to the upside) - at least at the open. So the most obvious question heading into trading today is....can the S&P 500 build on this short-term breakout? Will buyers continue to send prices higher throughout the day or is just another false alarm? 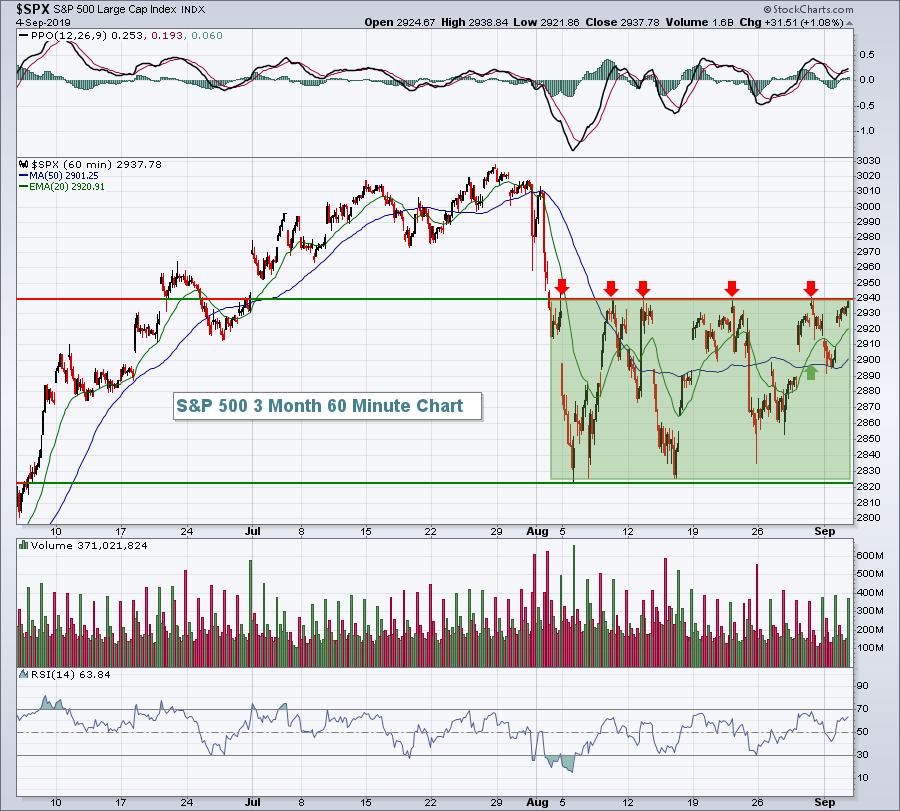 Given this morning's futures and likely breakout of this trading range, I think the rising 20 hour EMA, currently at 2920 becomes the support level to watch. If we can hold above it, then we're very likely to return to challenge the all-time high set in July.

There's a big event on Monday at EarningsBeats.com on Monday, September 9th, just after the market closes. Mark your calendar. More details will follow over the next few days. In the meantime, please be sure to subscribe to our FREE EB Digest newsletter, focusing on key earnings and relative strength. CLICK HERE to sign up! Thanks!

I discussed the DJUSBC above in the Market Recap section, but let's take a little different look at the group here: 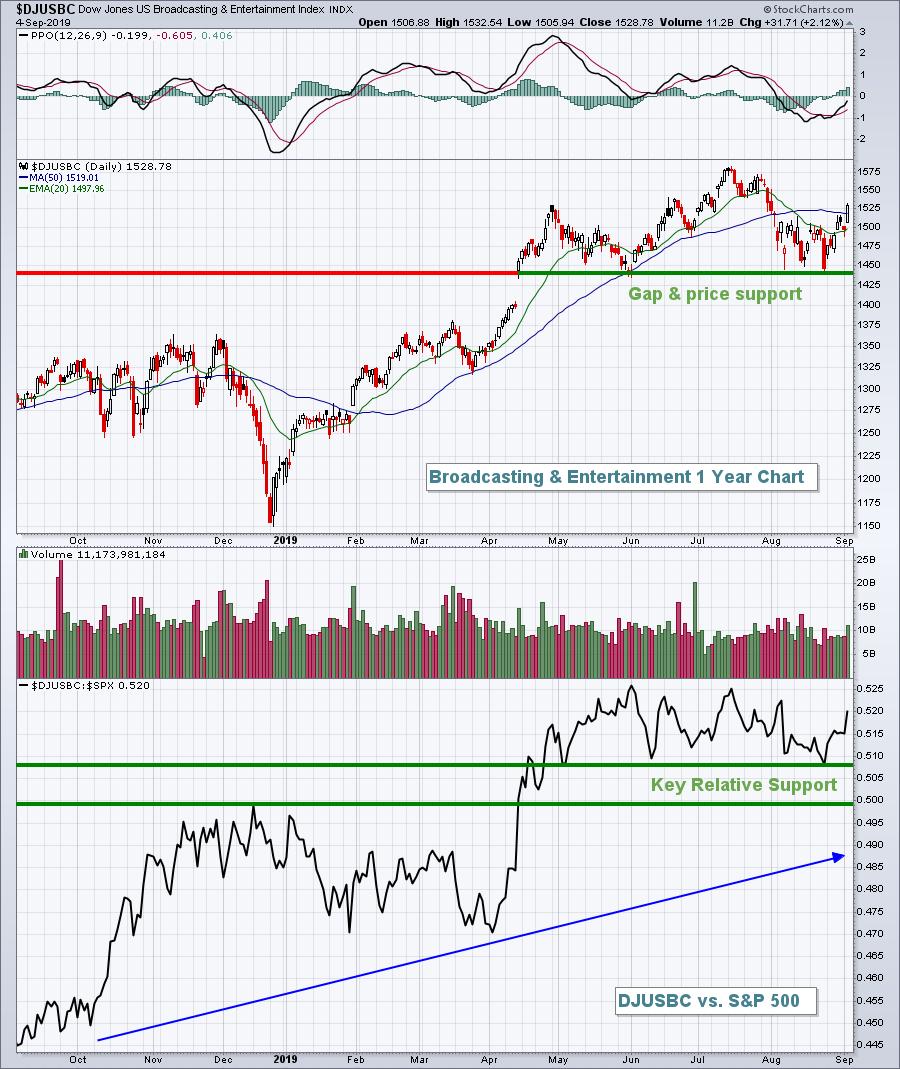 Those with the glass half empty approach see a topping head & shoulders pattern. I'm in the glass half full camp and I see a leading industry group consolidating within a bull market advance.

August ISM non-manufacturing index to be released at 10:00am EST: 54.0 (estimate)