The following is the EB Daily Market Report for yesterday. It is sent out each day (usually between 11am and noon EST) to our members at EarningsBeats.com. It's one of several new products and services that we've unveiled over the past month. If you'd like to try our entire service for 30 days, there's a special $7 trial offer. Of course, I'd love to have your support. Simply CLICK HERE to get your subscription started. Thanks!

I've said on plenty of occasions before that I'm bullish, so please understand that when I look at the S&P 500, I'm looking for bullish outcomes. The stock market is made up of bulls and bears and you certainly don't need to agree with me. But I at least want you to understand where I'm coming from when I look technically at the benchmark S&P 500. I see two patterns worth watching right now, one more short-term on the daily chart and the other longer-term on the weekly chart. My most bullish thought is that we're currently in a bullish ascending triangle consolidation pattern that's likely to break to the upside in the very near-term: 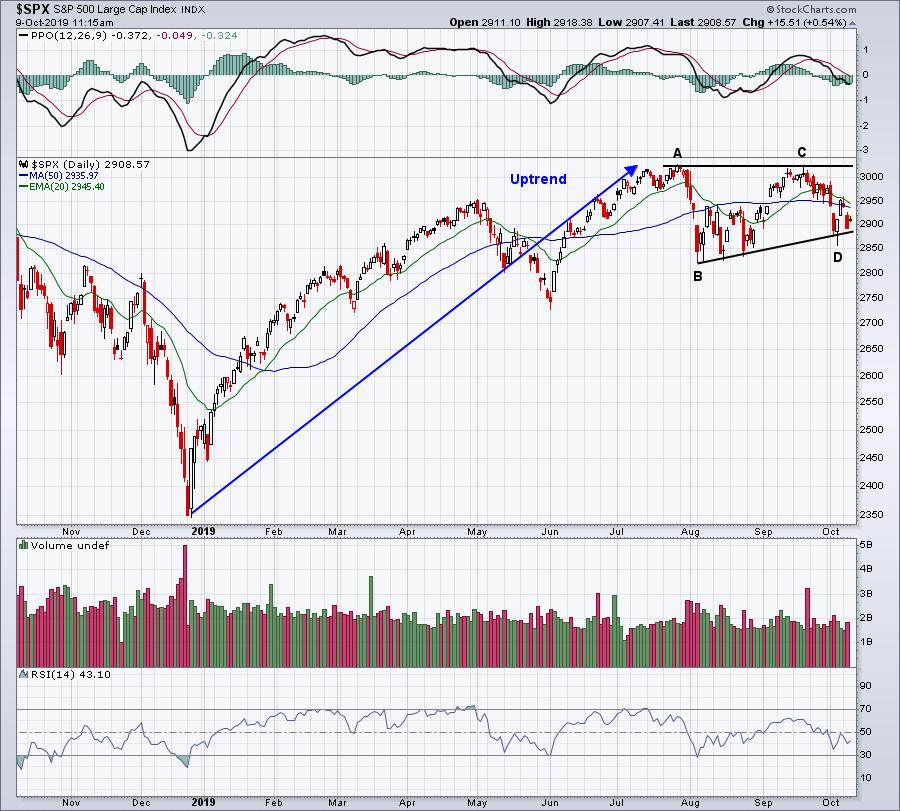 This is a classic A-B-C-D-E ascending triangle. The pattern would fall apart on a close below Point D near 2860. Until that happens, I would look at the market quite bullishly in the near-term. If this short-term pattern were to fail, then the longer-term weekly chart and pattern would more likely begin to unfold: 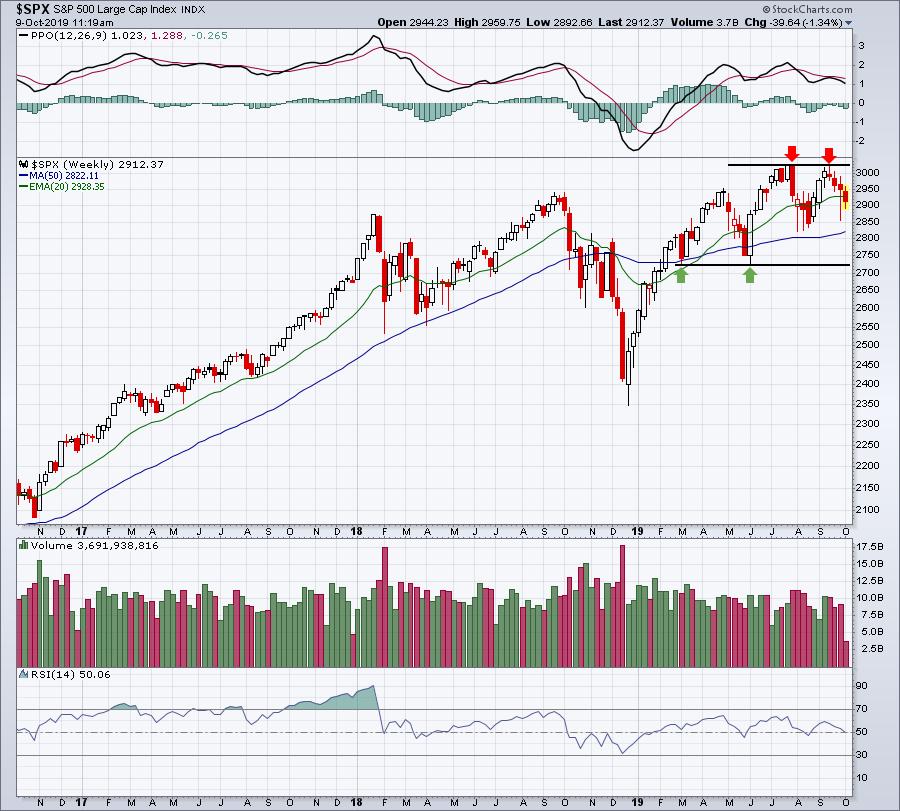 This would be a rectangular consolidation pattern that could see another low near 2725. That would allow the weekly RSI to perhaps dip to 40 support. This could occur if the current trade war scuffle continues and fear ramps up. A Volatility Index ($VIX) back above 25 would likely result in such a scenario.

Healthcare (XLV) has been the weakest sector the past several weeks so we should be mindful of key support levels. Medical equipment ($DJUSAM) has easily been the best performing industry group in healthcare, but yesterday's selling threatened key short-term price support: 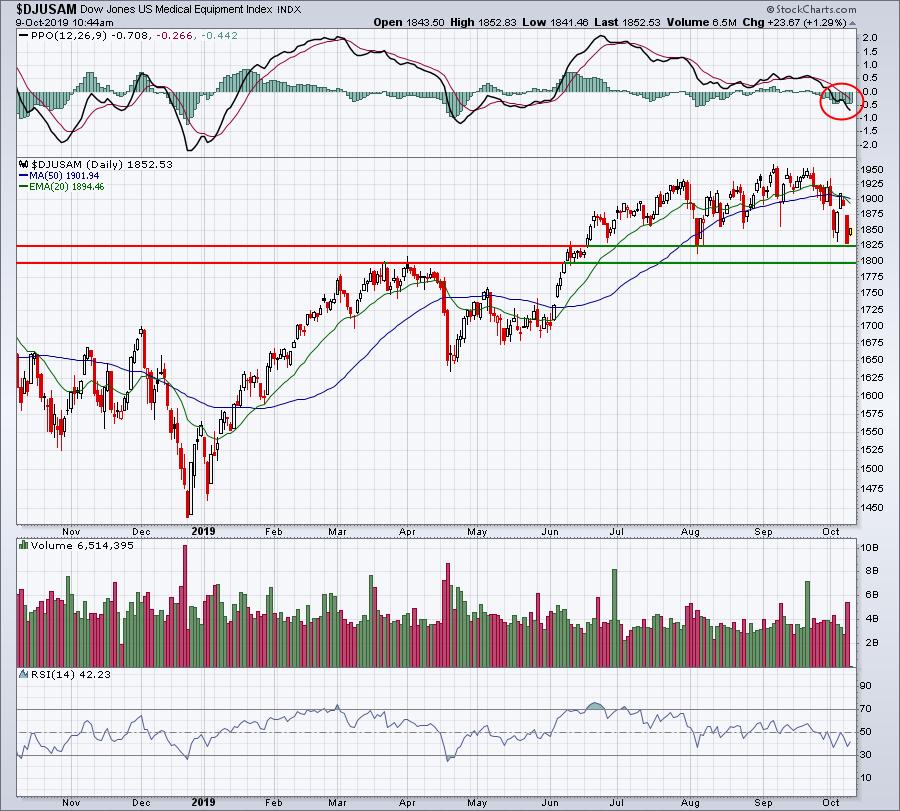 The daily PPO has weakened and is now well below the centerline. So a breakdown in price would add further weakness to an already suspect chart. The longer-term chart on the DJUSAM is much more bullish. Therefore, it's likely we're dealing with short-term issues only. The action here definitely impacts our ZBH active trade alert, which has been one of the better performing stocks in this industry group.

I ran a scan of high volume stocks on our SECL. Here are the stocks (6 out of 307) that had already traded more than .60% of their normal daily trading volume as of 11:00am EST:

ROKU is covered below in Active Trade Alerts as we took profits today. Here's my latest take on 2 others that stand out to me today: 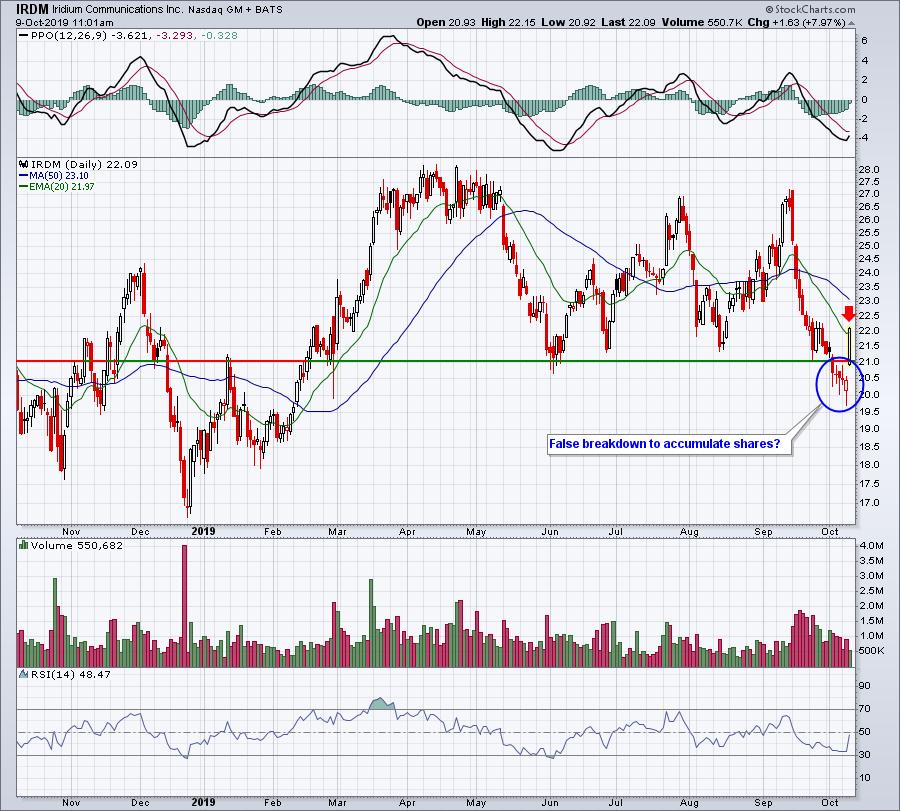 I always think "manipulation" when I see a breakdown like this and an analyst upgrade comes out. That's what's happened to IRDM. Note the breakdown wasn't exactly on huge red-filled candles and it ended yesterday with a hammer. Thieves. 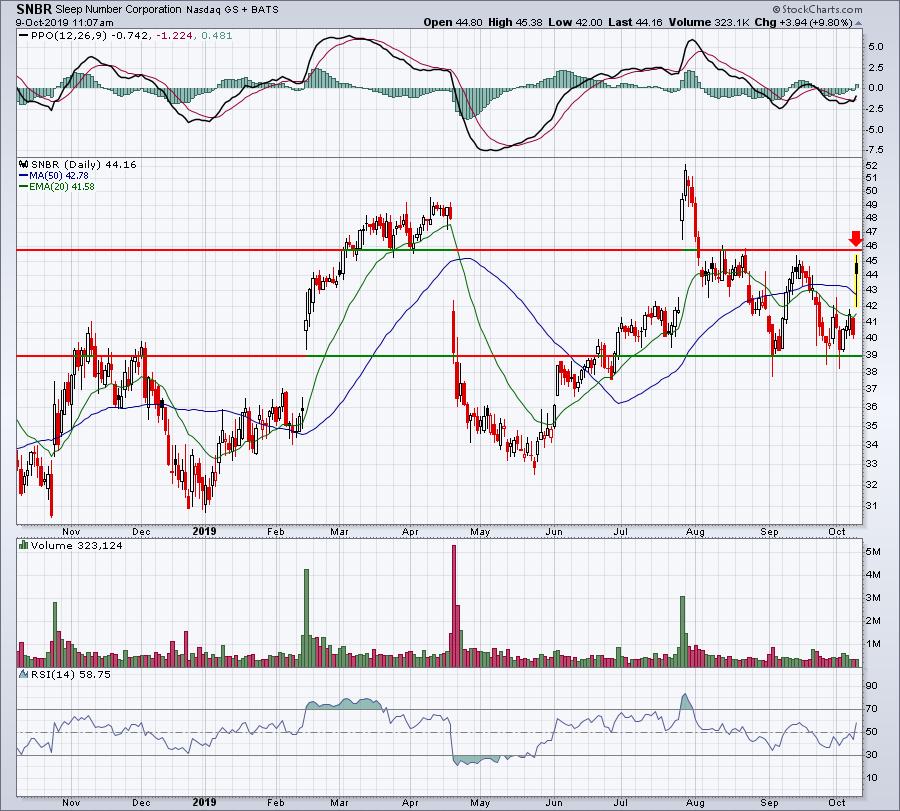 SNBR also was upgraded this morning after a few false breakdowns beneath 39. A close over 46 would be very bullish and likely to lead to a retest of its earnings-induced high of 52 in late-July.

ROKU (+6.06%) - we sent out a Profit Alert on ROKU today as it was approaching its key 20 day EMA. Stocks that move down on heavy volume tend to struggle to clear that declining 20 day EMA. We still like the stock longer-term, but are simply recognizing the potential for a short-term reversal. Besides, at the time of our Profit Alert, ROKU was trading at 113.40, which represented a 13-14% gain in less than two weeks. In addition to needing to be patient and disciplined on the entry side, we need to do the same exiting. The original target price was 126, which reflected the 20 day EMA at that time. The 20 day EMA is now much lower as you can see on the chart: 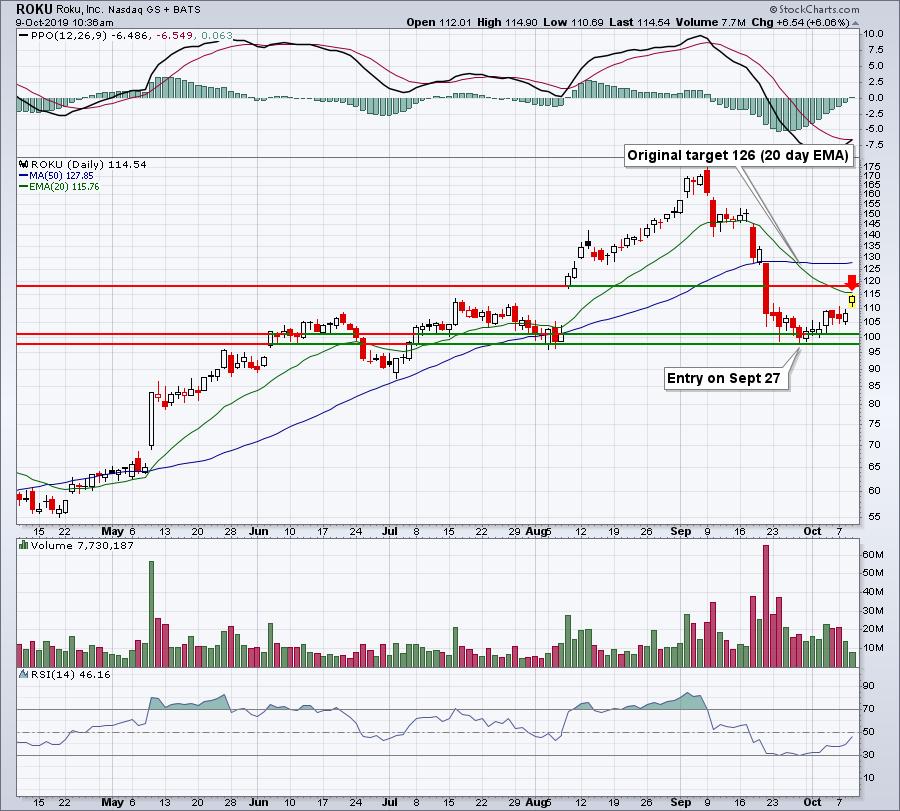 If you're still holding ROKU, you want to close above the 20 day EMA. That's step 1. Above that, the prior gap support now becomes resistance at 118.70. Then the extraordinarily heavy volume that accompanied the September 20th selling began at the 127.39 open. Those are the three immediate levels I'd be watching from a trading perspective.

ZBH (+0.45%) - the biggest thing to watch on ZBH is actually not on ZBH's price chart. It's on the medical equipment ($DJUSAM) chart, which is shown above in the Sector/Industry Focus section. Holding support on the industry chart will likely have a key impact on ZBH.

TWTR (+0.05%) - it's been another flat day thus far for TWTR, although it's recent action looks strikingly similar to June, just prior to a pre-earnings run higher: 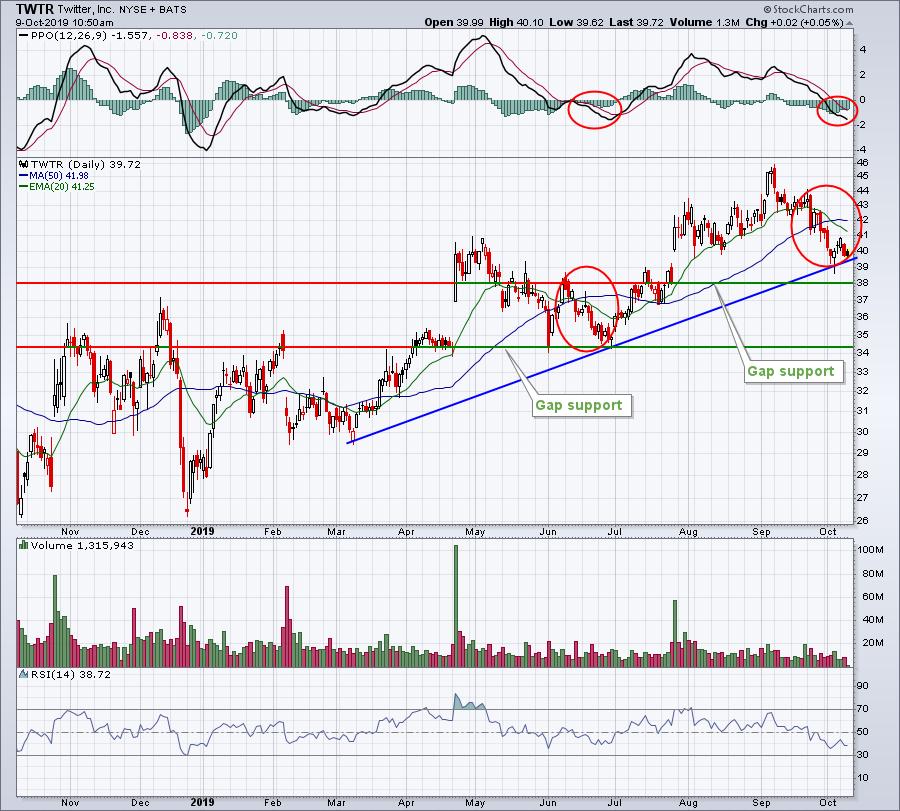 I don't know if history repeats itself here, but I certainly hope so. RSI is now close to 40, which is exactly where we were a little more than 3 months ago. Gap support is the key here.

ZUMZ (+1.89%) - nearly hit our second entry at 29.50 yesterday as it printed an intraday low at 29.53. The recovery has been quite bullish as today's percentage gain shows.

After taking a profit on ROKU, our 4 remaining alerts look solid technically.

Here are the two most actives today on the S&P 500: 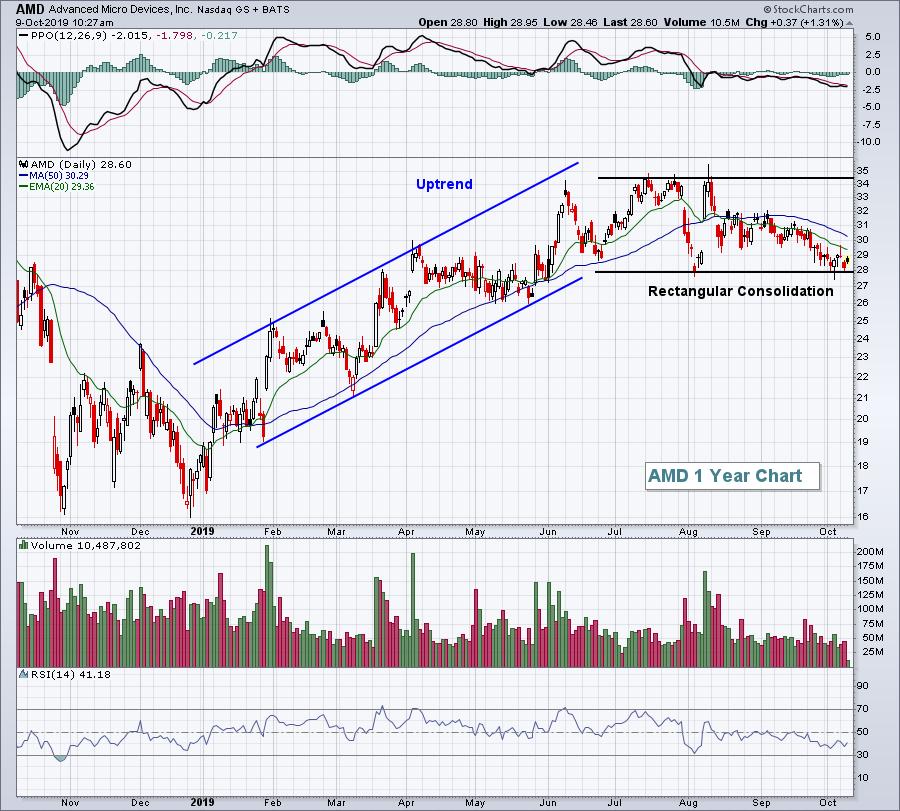 Don't give up on AMD just yet. It's consolidating. I know it's been an underperformer vs. its semiconductor peers of late, but the game isn't over. I'd feel much more bearish about it if the price support shown is lost. For now, however, I think it simply requires patience. Entering at the current level actually isn't a bad idea from a reward to risk perspective. 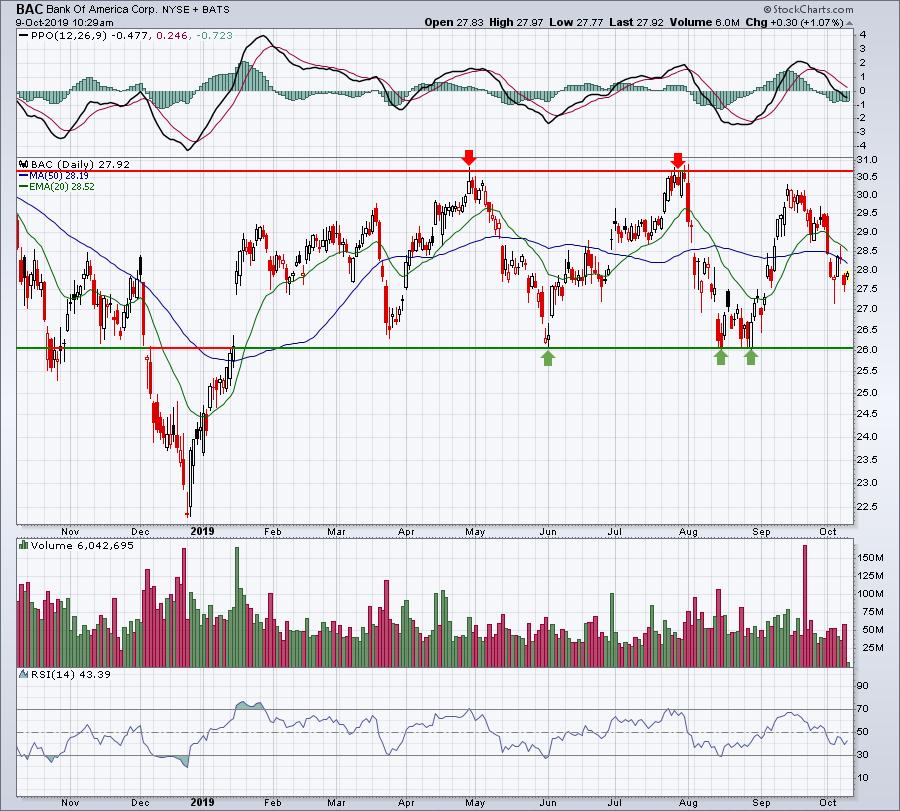 BAC isn't bad, it's just been part of a bad group. If banks manage to strengthen in the coming days and weeks, other banks look better. I'd pass on BAC.

Here are the key earnings reports for this week: