Before I talk about jobs, let's discuss the S&P 500. We're consolidating. In a secular bull market, that's fashionable. We went through this from 2014 through early 2016. This is simply the 2018/2019 version. Every downturn and we hear from the recession camp and the bear market camp. How many recessions have been called in the past 18 months? I just laugh....and so does Wall Street. The fear mongers generate the emotional selling and Wall Street happily buys their shares. And when the news hits its ugliest level, the stock market takes off.

During our last period of consolidation from 2014 to 2016, here's the GDP growth:

The S&P 500 consolidated as we approached the slowdown, but took off during the year that actually posted the worst GDP growth number. Why? Because the stock market is the best leading economic indicator. GDP growth accelerated in 2017 (+2.4%) and 2018 (+2.9%). Now the stock market is sensing a pause in growth (not a recession). I think the GDP could contract further as we head into year end, especially given the lingering trade war concerns. That will spark much controversy and, yes, more recession calls. Investors will be spooked, the Volatility Index ($VIX) will spike, the panicked will sell their shares, and Wall Street will happily buy them. Then comes the next run higher. Individual investors will question how the stock market can keep going higher with so much negative news. Rinse and repeat. Blah, blah, blah. 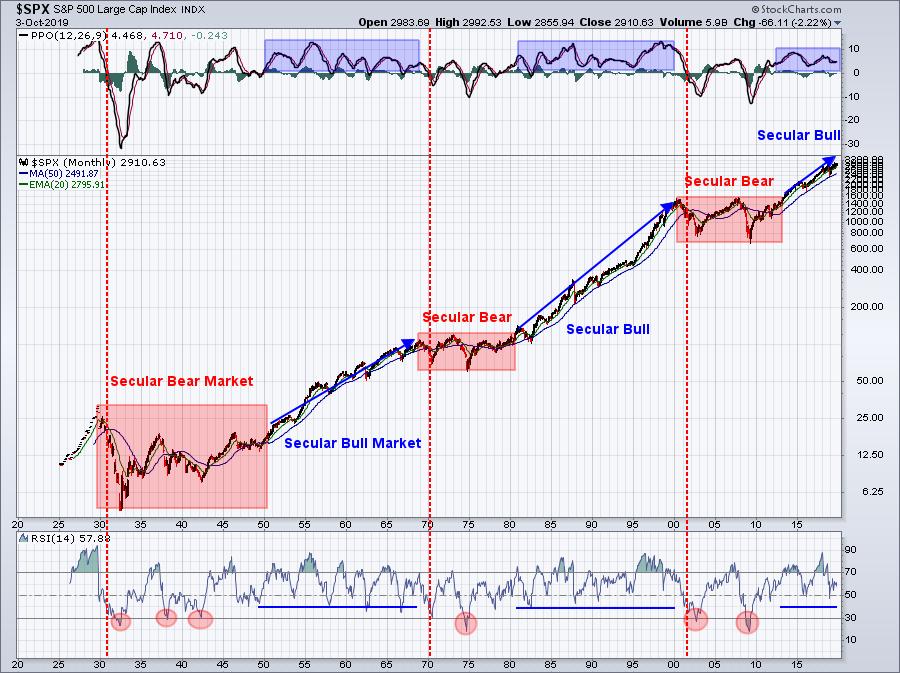 Not only are we in a secular bull market, but the relative strength of the aggressive sectors suggests it isn't ending. It's difficult to predict the exact timing, but I believe we are very close to an EXPLOSION to the upside. One tell-tale sign will be the sudden surge in transports ($TRAN), which we haven't seen yet. So again, maybe we're not quite there, but it's going to happen - all in my opinion, of course.

So if things are truly going to get worse, what would be the real "killer" in my view? It'll be poor jobs numbers over a period of time, not just one or two months. I like to view the jobs numbers on a "big picture" chart, one that looks at jobs using a 12 month rate of change (ROC). When that ROC deteriorates, the odds of a recession and big market decline increase. Here's the proof to back me up: 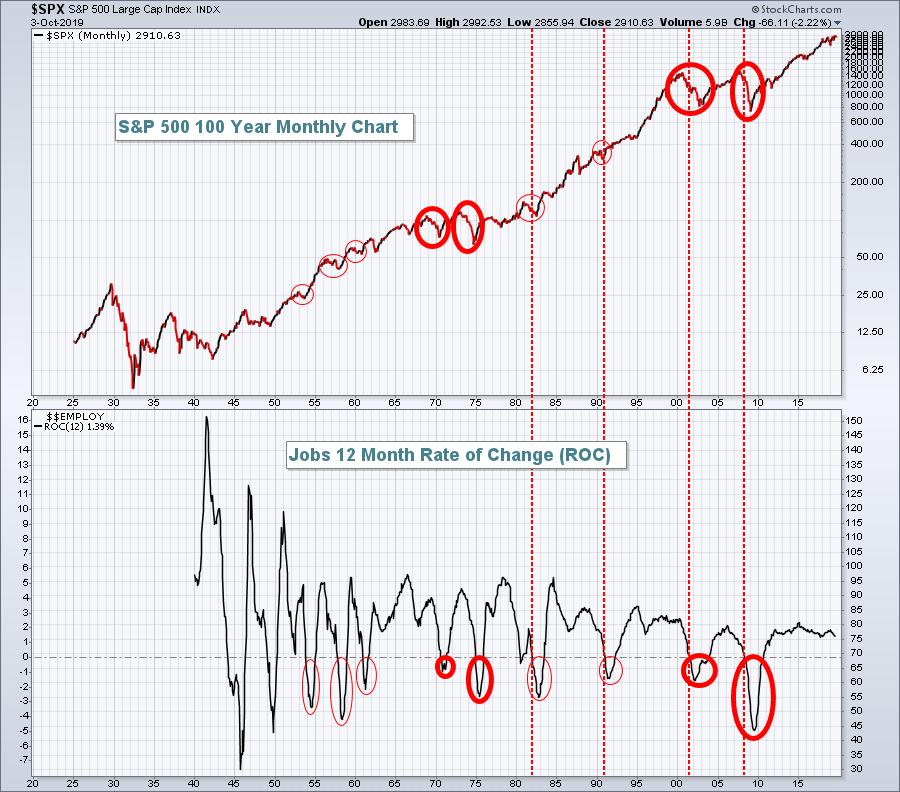 Do you see the jobs rate of change move negative in the 1950s and again in the early 1980s and early 1990s? All of those are circled in light red as they signaled recessions during a secular bull market. They had little impact on the direction of the stock market, perhaps a pause. The bold red circles, however, signaled recessions during secular bear markets. You need to know the difference because the stock market's reaction is very, very different.

So here's my argument. First, there's no jobs signal whatsoever that we're heading for a recession. Second, if we do have a recession, my argument is that the stock market, other than a consolidating pause, will shrug it off.

PAY NO ATTENTION TO CNBC AND ALL THE RECESSION FORECASTERS. IT DOES NOT MATTER!!!!

Be smart and manage your money much more effectively.

Please do me a favor. Spend $7. That's all it costs to join me at EarningsBeats.com for a 30-day trial. If you like the service after 30 days, I'll give you 50% off the $97 monthly rate if you subscribe annually for $597. If you're not interested after 30 days, you're out $7. Trust me, it'll be worth your minor investment. If you've been a trial member in the past, just understand that our entire product and service lineup changed when I returned as Chief Market Strategist effective September 15th. I'll honor the $7 trial rate if you've not experienced the *NEW* EarningsBeats.com. In addition to all the normal membership benefits, including my EB Daily Market Report (check out a sample of this week's EB Daily Market Reports HERE), I'll be hosting two webinars over the next two weeks that will be included in your trial. The first webinar will be on Monday, October 7th at 4:30pm EST. That'll be my Q4 Market Outlook, where I'll give you all my latest thoughts on the fourth quarter ahead. For more information about the two webinars, including Monday's event, CLICK HERE.