I am extremely bullish as we head into 2020. Everything is lining up, but there are two factors that I believe will help us help our members - both professionals and individual traders.

First, the Fed has finally moved into the dovish position it should have been in one year ago. I'm still convinced that the periods of weakness and fear that we endured in 2019 were more attributable to the Fed than they were to the trade war. Feel free to disagree, but I'll state my case in this article. Looking back, our economy slowed considerably in late-2018 and Wall Street was on top of it. After posting GDP of 2.5%, 3.5%, and 2.9% in the first three quarters of 2018, Q4 GDP dropped off to just 1.1%. The S&P 500 fell like a rock during Q4 in anticipation of a slowing economy: 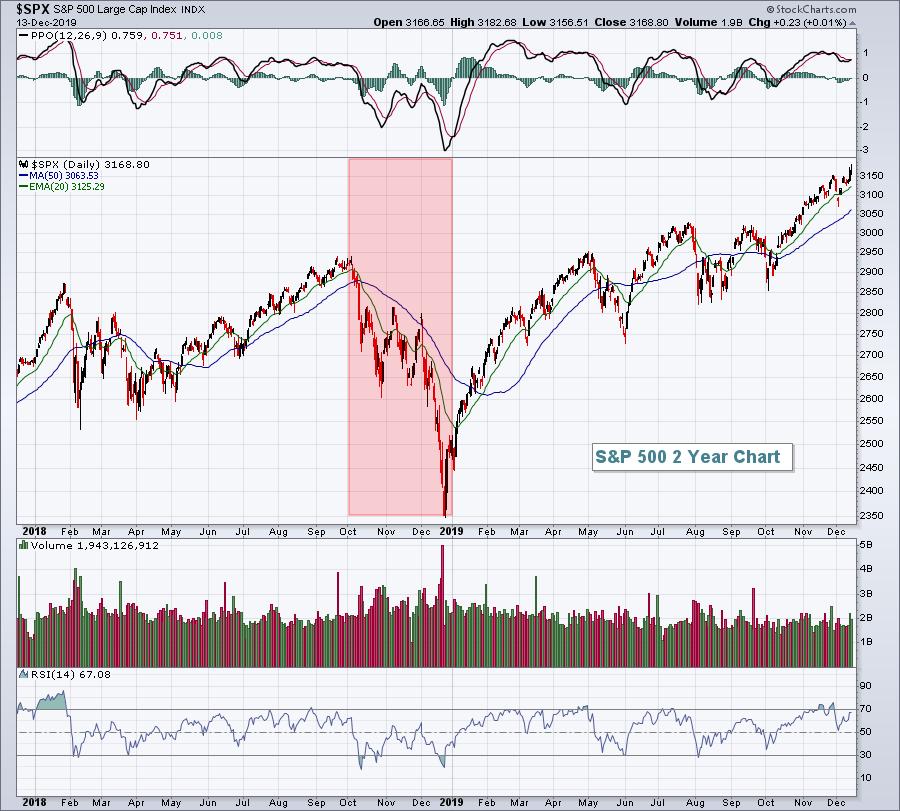 The stock market is the best leading economic indicator, in my view. Is there any doubt the message that was being sent in Q4 2018? That red-shaded area told us - beat us over the head, in fact - that the economy was slowing. Yet what did the Fed do? They raised rates in December 2018 and then suggested we'd see two more rate hikes in 2019. What?!?!?!?!?!? Does anyone at the Fed have a StockCharts membership? Why would anyone with half a brain raise interest rates after looking at this chart? A rate cut is what they should have done. Raising rates has the impact of increasing the value of the U.S. dollar ($USD), which in turn puts downward pressure on commodity prices. The Fed has two mandates: maximize employment and stabilize prices. They got both wrong. And in the event you think I'm simply doing a little bit of Monday morning quarterbacking, I said this exact thing one year ago in my article, "How The Grinch Stole Christmas" Featuring Jerome Powell". My quote at that time was this....

I'm not smarter than the Fed, trust me on this one. I simply used basic technical analysis techniques to interpret what the stock market was screaming to the Fed. They didn't listen. Not only did they not listen in December, but they also had two additional faux pas. In May, Fed Chair Powell infamously said that lower inflation was "transitory". Apparently, he also didn't consider this chart: 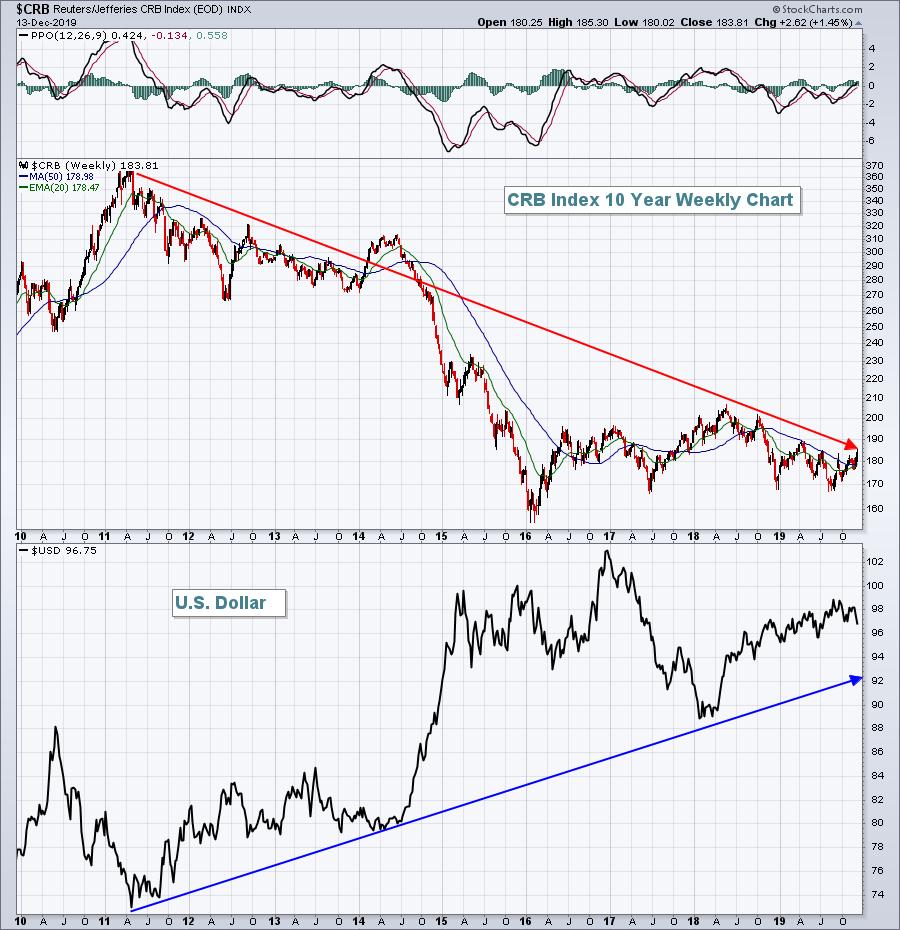 If your monetary policy strengthens the dollar, the effect is to lower commodity prices. Economics 101 is in play here folks. But the next big problem was leaving rates unchanged for too long. Central bankers from around the globe were dovish. Because we are now so much more of a global economy rather than a domestic economy, it's important to compare our monetary policies to those of central bankers around the globe. Deciding to simply hold rates steady wasn't enough, because that policy was still more hawkish than other central bankers. That resulted in a continuing rise in the dollar and a continuing fall in commodities. So on May 1st, when Powell suggested that lower inflation was "transitory", I just shook my head in disbelief and wrote my May 2nd article, "Banks vs. REITs Provide Bullish Clue", where I indicated that the bond market was growing concerned with deflation, not inflation. I also indicated in that article that the S&P 500 was prime for a fall given the negative divergence and bearish engulfing candle that printed on May 1st after Powell's latest blunder.

It was another huge mistake by the Fed and all of us stock traders paid the price, as the S&P 500 fell from 2950 to 2730 in a month. It fell twice as much as I had suggested. Sure, the headlines blamed the trade war. The real problem, though, was the Fed, which was totally clueless throughout much of 2019. A third Fed mistake occurred on July 31st, when they finally began admitting that disinflation (lower inflation readings) was a problem, and they did cut rates FINALLY!!! But once again, their language fell short, suggesting there would be no further rate cuts for an "extended period". I suppose we should have asked for a definition of "extended period" because the Fed cut rates at its next two meetings in September and October. Am I the only one that believes the Fed royally screwed up in 2019, continually back-tracking to make up for earlier mistakes? Feel free to send me your thoughts about all of this to "tom@earningsbeats.com". I know I'm on a rant, but my gosh, we need to have a little confidence in the Federal Reserve and I honestly have very little. The good news is that the Fed is much closer to reality now than it was one year ago. They now acknowledge that they're watching inflation data closely and have even said they would need to see inflation higher for an "extended period" (uh oh!) before considering raising rates.

The trade war is a temporary thing. I don't know if it will be resolved in 2020 or if the can will be kicked further down the road. But I think we can all agree that it's not yet resolved, despite a "phase one" agreement. The stock market barely reacts to the downside any more on fearful trade headlines. Why? Well, in my opinion, it's because this was never about the trade war. It was about the Fed. Thanks Jerome for a great year. Anyone else who got it wrong for so long and on so many occasions wouldn't have a job. I suppose it's nice to have a 4 year term for job security.

But good news has surfaced......we now have a truly dovish Fed. That will likely keep our interest rates low for an "extended period". :-)

Interest rates near historic lows mean that future earnings growth can be discounted back using these lower rates. That results in higher valuations and gives stocks plenty of room to run higher....and they're going to. That will stack the odds in the bulls' favor in 2020 without a doubt.

But here's the second piece of great news as we approach 2020. Trading commissions are G-O-N-E. They're zero. I haven't calculated how much that will save me going forward, but I trade a lot. It is going to completely alter my strategy of entering and exiting positions because there's no cost to trading more often and at different levels. If you're a follower of Trading Places or EarningsBeats.com, you know that I like to buy during pullbacks in "support zones". I plan to immediately begin making changes to my entry and exit strategies to take full advantage of this new trading environment and I want to share it with you.

Accordingly, I'm hosting a webinar on Monday at 4:30pm to discuss this very important development. I'll share several trading ideas and how I'd consider using this zero-commission environment to our full advantage. If you can't make the event live, no worries. It'll be recorded and we'll make sure you get a copy.

Thanks and happy trading!