I'm not that surprised at the continuing rally. Yes, prior extreme selloffs like 1987 and 2008 resulted only in 38.2% and/or 50.0% Fibonacci retracement rebounds and, when we look at the S&P 500 currently, we're right at that major resistance area: 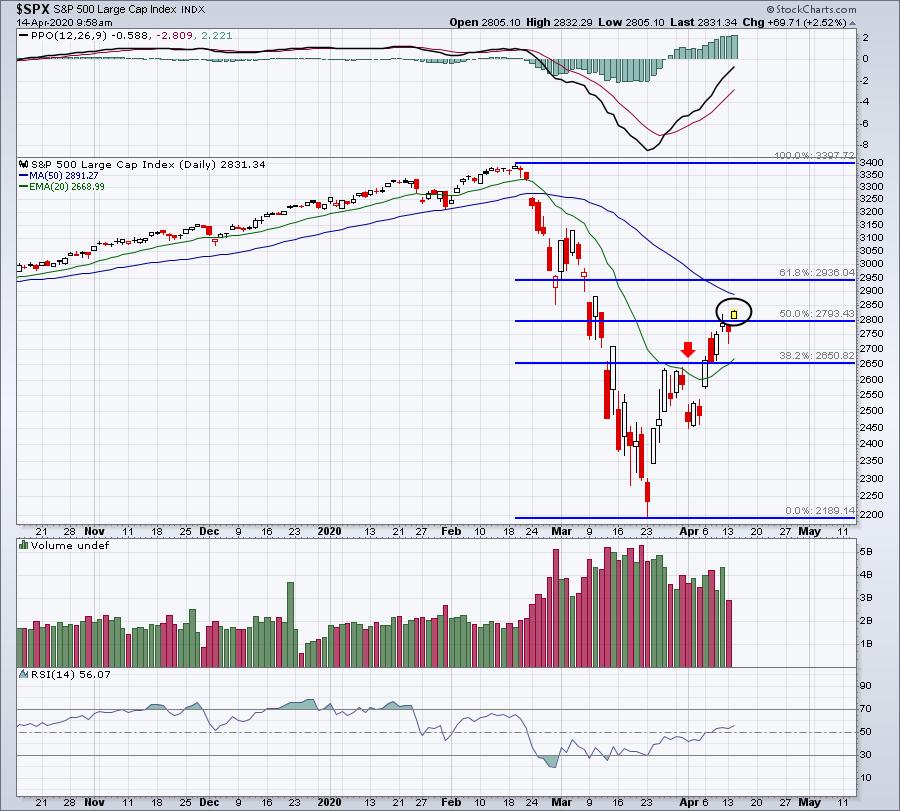 But a sample size of 2 isn't exactly a representative sample. The bottom line here is that we remain in a secular bull market, despite the recent cyclical bear market downturn. 2020 is very similar to 1987 in that regard. In 1987, Black Monday (October 19th) didn't mark the bottom. It was Blacker Tuesday (October 20th) that actually marked the bottom. But it's noteworthy that the initial October 1987 bottom was never retested again. We got close, but never touched that Tuesday low. We were also in the 7th year of a two-decade-long secular bull market. Here in 2020, we're also in the 7th year of what I believe will turn out to be a two-decade long secular bull market. We must keep things in perspective. Here's the long-term chart of the S&P 500, so take note of what that MASSIVE 1987 market crash looks like in the rear view mirror: 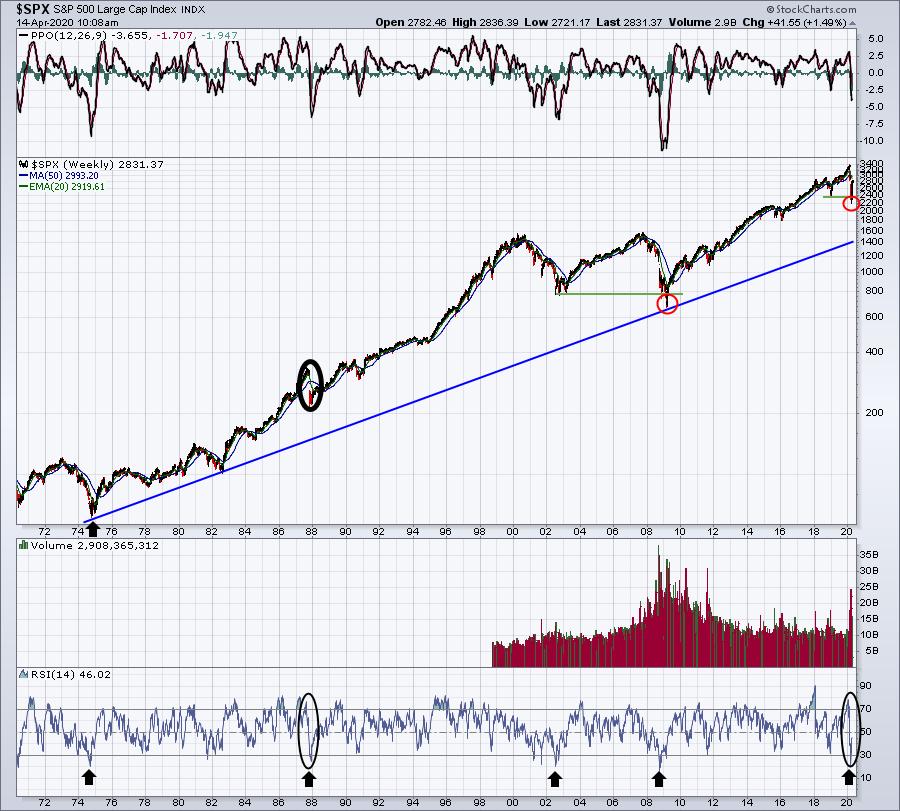 The bold black circle highlights the 1987 crash. This is a 50 year weekly chart. Note that 2020 represents only the second time during these past 50 years that we've seen the S&P 500 drop from a weekly RSI reading above 70 to a reading below 30 in a span of 1-2 months. In both cases, a bomb was dropped, and the market collapsed. In 1987, it was a GREAT time to buy and I believe history will prove that 2020 has provided the same opportunity. The economic shock of this virus was priced (I might argue overpriced) into equities very quickly. As we come to grips with the actual effects, we're seeing a significant rebound. Moving right back to 3400 on the S&P 500 would seem to be a stretch, but I also believe seeing another drop to 2200 is a stretch.

Short-term is where I have an issue with the stock market. And it's because I know what monthly options expiration can do to short-term direction. Many times, especially after wildly volatile runs to either the upside or downside, market makers stand to make a mint. As we continue pushing higher and higher, in-the-money call value is growing and growing. Meanwhile, anyone betting against the stock market with puts the past few weeks have seen the value of those puts diminish significantly. Accordingly, as prices move higher, max pain (the point at which in-the-money calls equals in-the-money puts) becomes further and further away from current price. On the move higher, as more buyers emerge and more calls are bought, market makers can increase the buying pressure by adding stocks where traders are heavily buying calls. Market makers, who take the opposite side of those options trades, are then call sellers. In effect, they're buying stocks and selling calls, a covered call strategy that protects them. But market makers aren't finished there. If, at some point before options expire or perhaps early in the week after options expire, they can reverse the action, it's a WIN-WIN-WIN. They WIN on the way up because they buy the stock to offset the calls being bought. They win on the way down because they short stocks at the top and create a quick selloff. Finally, all of those in-the-money calls see significant deterioration in value during that quick, wicked selloff. Market makers win again. Many times, we traders are left with dust. All of our paper gains literally turn to dust.

Last month, we saw the big selloff in equities heading into options expiration week. Tesla (TSLA), had fallen from 807.00 on March 3rd to 350.00 on March 18th. By the time Friday, March 20th option expiration came around, TSLA had a max pain of 477.00. Check out the 5 day, 10 minute chart for TSLA as it approached options expiration: 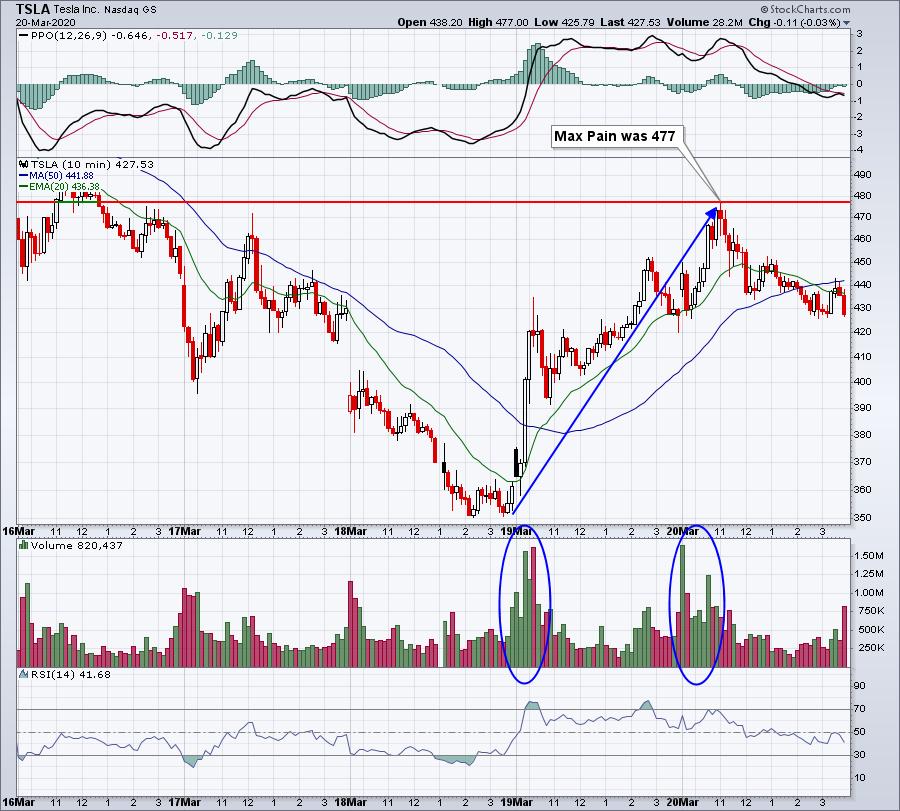 TSLA moved higher by 36% in a little over 24 hours! THAT is how you wipe out millions and millions of in-the-money put premium. While those holding puts were dumbfounded, market makers response was "KA-CHING!" It's the way the market works.

This Friday, it's options expiration for April. At EarningsBeats.com, we now host a monthly "Max Pain" webinar for our members, looking to uncover very short-term trading opportunities for our members, trying to put our trades on the side of the market makers because, quite honestly, those firms make money. If you'd like more information about this afternoon's webinar (begins at 4:30pm EST, shortly after the market closes), CLICK HERE.