Let me first say that arguing the bullish case for U.S. equities immediately puts me in the minority, which also would be my first bullish argument. When the masses believe we have nowhere to go but down, that's typically a sign that a bottom is near. Extreme bearish sentiment has historically marked major bottoms and, from the following chart, it's pretty obvious to me that we've reached a couple extreme levels of fear: 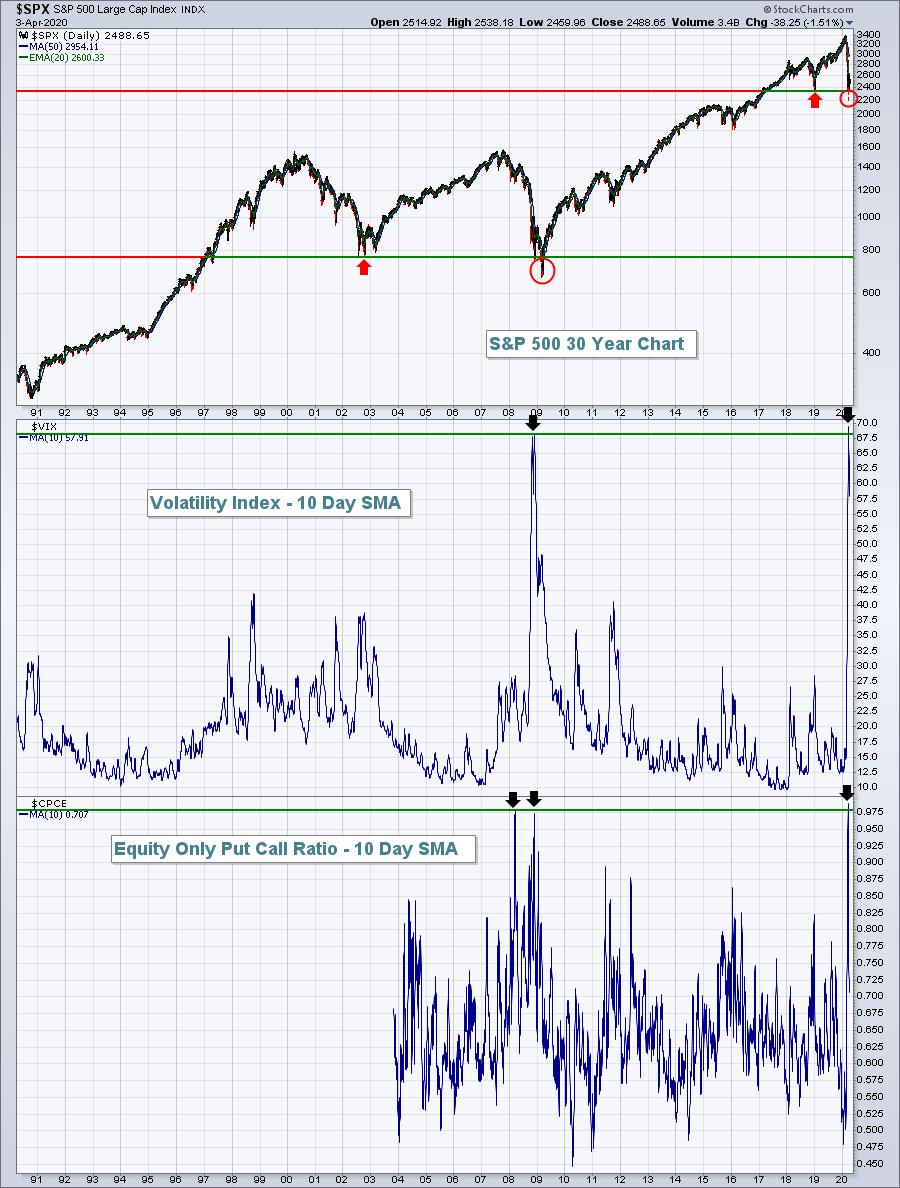 The red arrows marked very significant price lows. The first, in 2003, marked the low following the dot com bubble crash during the secular bear market from 2000-2012. The second, in 2018, marked the trade war/Federal Reserve gaffe bottom, but this was during a secular bull market. In both cases, extreme fear accompanied slight and temporary breaks of key price support. History tells us that the bottom in 2009 occurred just a few months after printing those incredibly bearish readings. I believe the odds favor either a bottom already in place, or perhaps one slightly lower low to encourage final capitulation.

The black arrows mark extreme pessimism and, over the past few decades, the 2008 and 2020 lows have no equal. While we might see yet one more low ahead, I'd be very surprised if it lasted long. By the second half of 2020, I fully expect our major indices will be in a much different position. By that, I mean much higher.

Another bullish factor to consider is that the combination of stimulus packages from government and extreme dovishness from the Federal Reserve will be a tough uphill battle for shorts to navigate. Bears spent five or more years arguing that stocks should not have been rising from 2009 to 2014/2015 because of quantitative easing. Yet the S&P 500 more than tripled from 666 on March 9th, 2009 to its close above 2000 at the end of 2014. There's an old adage on Wall Street that says "don't fight the Fed" and shorting the market the next couple months to couple years will be a direct battle with the Fed (and the government stimulus packages).

Third, have you ever researched the 1918 Spanish flu pandemic? Its spread, infection rate, mortality rate, and global impact certainly appeared to be greater than COVID-19. Nearly one-third of the global population was infected by the Spanish flu and the mortality rate was as high as 10%. Many of the social distancing measures that are now in place were also put into effect then. Oh, and by the way, there was this World War thingy taking place at the same time. Do you know how the Dow Jones Industrial Average performed in 1918 (year of the outbreak) and 1919 (resurgence of cases), with a war taking place simultaneously? It gained 10.51% and 30.45% over those two years, respectively. Businesses can be extremely resilient, especially during a secular bull market with overwhelming support from both government and the Fed.

Fourth, I can only say that I'm thankful that this pandemic didn't hit 12 years earlier, right in the midst of a secular bear market and a near collapse of our financial system. I don't know if we could have handled the brunt of a 1-2 punch of a financial system meltdown, combined with a pandemic. But having one of the strongest economic periods of the last 50 years heading into 2020, and a financial system that had been nursed back to health for a decade was definitely a silver lining. If ever our economy was in a position to potentially bounce back from the economic disaster that lies ahead, it's probably right now.

Finally, we have a long history of rising from the ashes to become stronger than ever before. Major capitulation typically results in certain paradigm shifts and I'm sure this will be no different. Brilliant minds and companies will view our current landscape as an opportunity and many are already hard at work to see positive changes through. Perhaps the biggest paradigm shift will be the opportunity for more and more people to work from home. Many companies are being forced into that new paradigm, so those who fear change have little choice right now but to adapt to a much different environment. Eventually, I see this as a major positive for businesses and workers.

Still, despite all of the above, we are likely heading into a couple of weeks where the news will become increasingly painful in U.S. Economics will take care of itself in time. For now, it's up to each of us to do what is necessary to protect ourselves, our families, and our communities.

At EarningsBeats.com, we are doing everything we can to help our members navigate the difficult days and weeks ahead from a financial perspective. On Friday, we opened up a WebinAR (WAR) Room to discuss new strategies that will help us create a bridge from the current fearful environment to a much more vibrant economy later in 2020. Our Friday webinar was two hours long and it was recorded. We will be sending out a link to that recording to our entire EarningsBeats.com community tomorrow morning via our free EB Digest newsletter. If you'd like a copy of that recording, but you're not currently a free EB Digest newsletter subscriber, CLICK HERE to join.