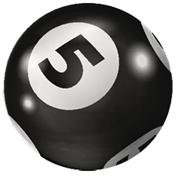 Today we will look at charts for the biggest stocks in the Nasdaq 100 ETF. Even though the big tech titans dominate QQQ, note that Pepsi (PEP) is the 10th largest stock and accounts for 2.3%. PEP is obviously part of the Consumer Staples sector.

The top five stocks in QQQ account for a whopping 45% of the ETF. This means that 5% of the holdings account for almost half of the price movements. Anyone interested in QQQ should definitely study the charts of these five stocks. 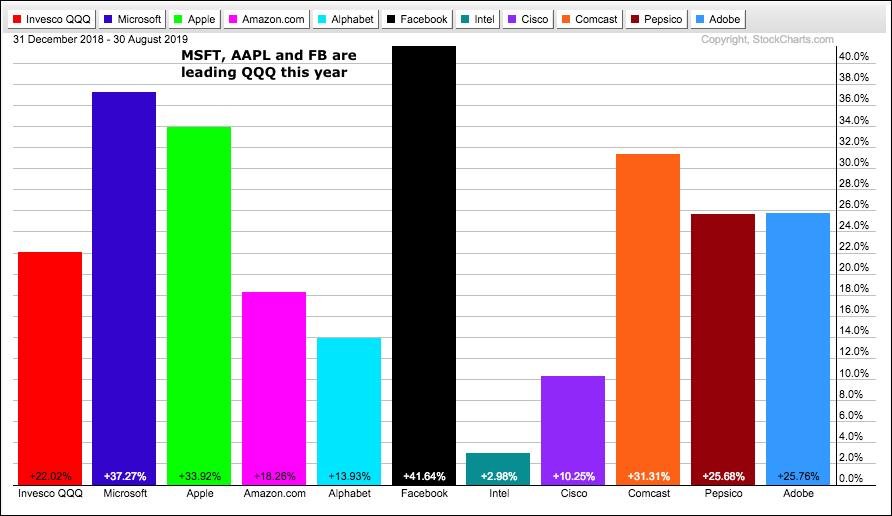 The top five stocks in QQQ are also the five largest holdings in the S&P 500 SPDR and they account for 14.42%. Thus, just 1% of SPY holdings (5 stocks) account for almost 15% of the  price movements. This is not good or bad. It just is what it is. The big five are: MSFT, AAPL, AMZN, GOOGL and FB.

Wondering about the next move in QQQ and SPY? Forget about banks and retailers, and focus on the fab five.

Before looking at these charts, let's cover the indicators used and the method behind the madness. The charts show RSI(65), Aroon (65), 255-day Price Channel and the 200-day SMA. 65 days covers around 3 months and 255 days covers a year. RSI(65) triggers bullish with a move above 55 and remains bullish until a move below 45. This suggests that the 3+ month trend in momentum is bullish. 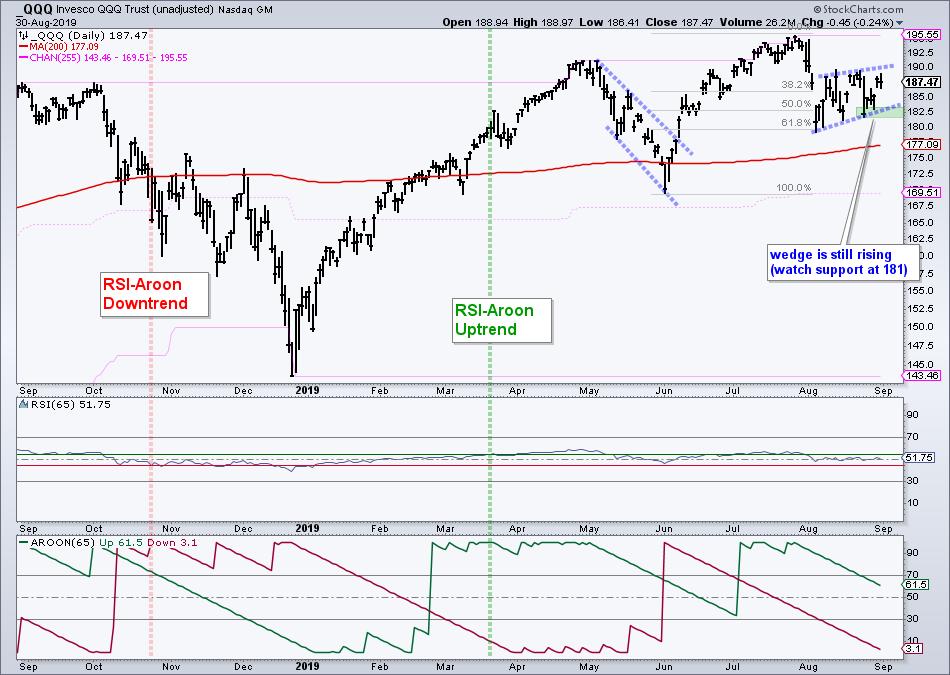 And finally, the 255-day Price Channels show the 255-day high-low range (pink lines). A stock records a 52-week high when it exceeds the upper channel and I like to see new highs within the last few months (long-term uptrend).

You can learn more about the RSI-Aroon strategy in this System Trader article.

The RSI-Aroon strategy signaled an uptrend in mid March. This is the point when RSI exceeded 55 and Aroon Up had already hit 100. Note that we do not need both to trigger at the same time. Aroon Up hit 100 a few days before RSI exceeded 55. The trend bias is bullish when the most recent signals were bullish. 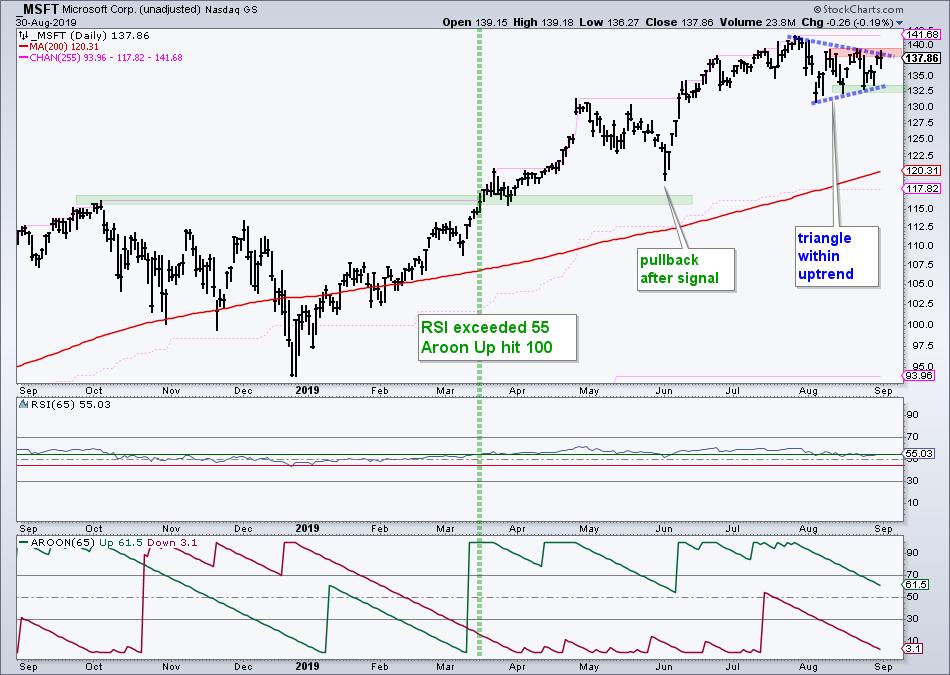 The stock pulled back with the market in May and then moved to new highs in June-July. MSFT is currently consolidating with a triangle in August. A consolidation after an advance is typically a bullish continuation pattern. The stock gapped up on Thursday and is on the verge of a breakout. While a break below triangle support would be negative, I would not turn fully bearish until the RSI-Aroon trend indicators trigger.

Apple Consolidates with a Triangle

Apple turned bullish in early April when RSI exceeded 55 and Aroon Up had already exceeded 100. There was a deep pullback in May, but the stock held support from the February-March lows and reversed near the 61.8% retracement. Ain't hindsight grand! 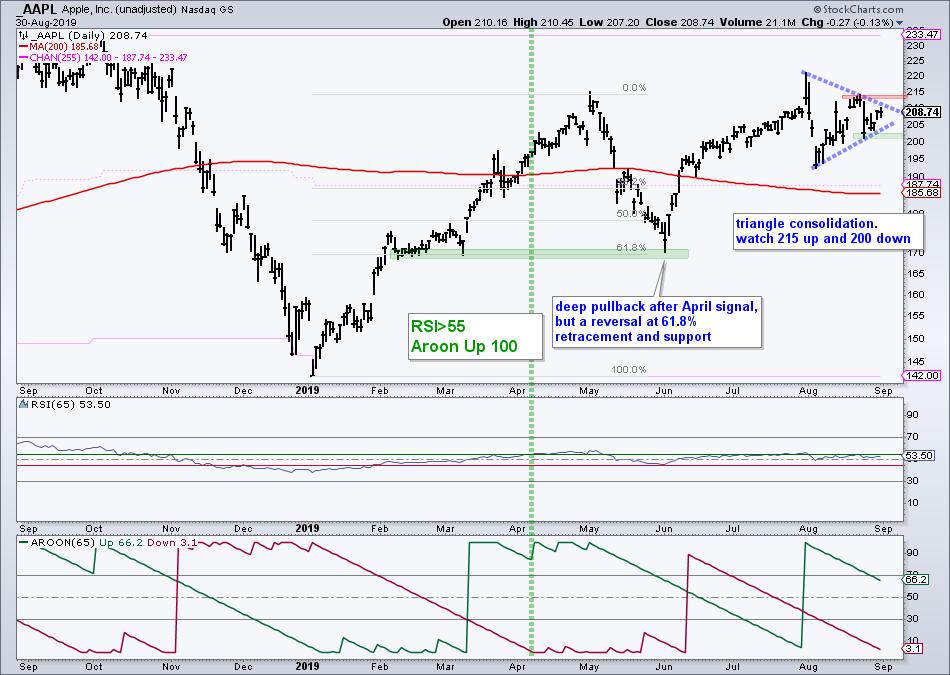 The stock is currently consolidating with a triangle above the 200-day SMA. Chartists looking for a jump can watch 215 for an upside breakout and 200 for a downside break. As with MSFT, I would not call for a bigger downtrend until the RSI-Aroon indicators trigger bearish.

The RSI-Aroon indicators signaled an uptrend in mid April for Amazon. The stock was then hit hard in May, but found support near the prior breakout zone and reversed. Amazon almost hit a new high in July, but fell just short of the 255-day Price Channel. SPY and QQQ hit new highs in July so this means AMZN is lagging a bit. 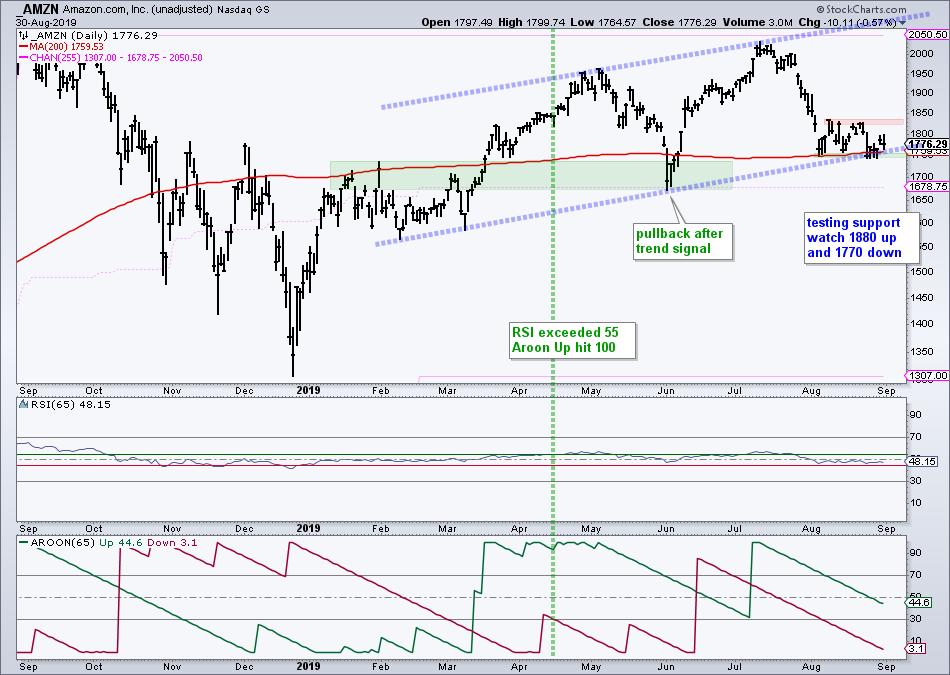 The stock fell back to the 200-day SMA and channel line in August for a big test. Note that a smaller consolidation unfolded the last few weeks and chartists can watch these boundaries for the early signal. A break above 1880 would be bullish, while a break below 1770 would be bearish.

Alphabet is All over the Place

GOOGL is the only one of the five that is not in some sort of uptrend. The stock hit a new high in late April, but then plunged below its 200-day SMA. Alphabet recovered immediately after the early June gap and even gapped up in late July. Despite all these gaps, the stock has pretty much moved sideways the last 12 months. 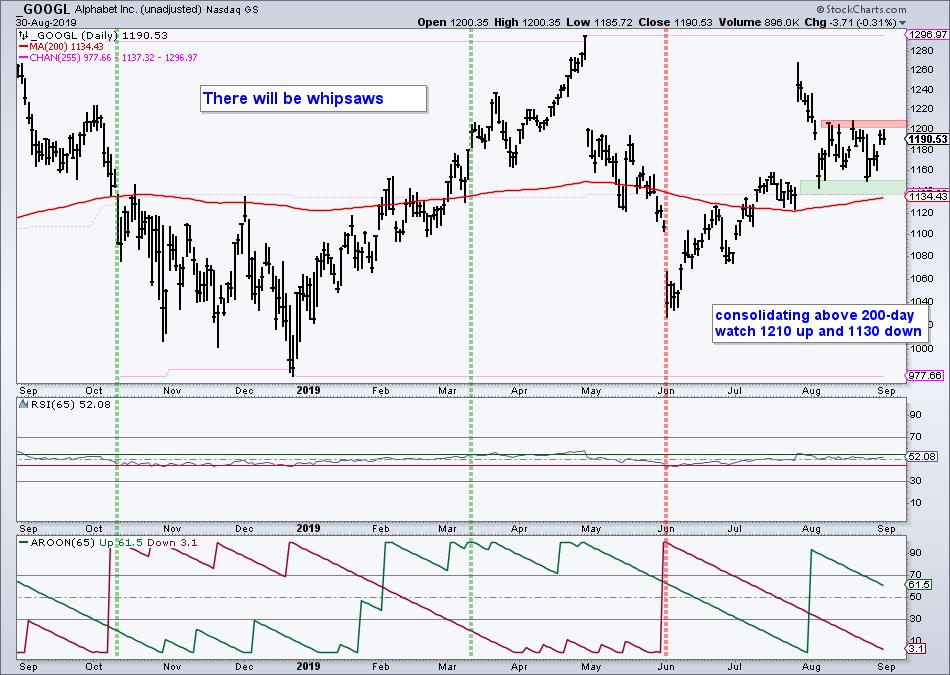 As with the prior three charts, GOOGL is also consolidating in August with well-defined boundaries. Chartists can watch 1210 for an upside breakout and 1130 for a downside break.

The final chart shows Facebook with a bullish trend signal in mid April. The stock fell with the rest of the market in May, and then rallied to a new reaction high in July. This high, however, was not a 52-week high because price fell short of the 255-day Price Channel. 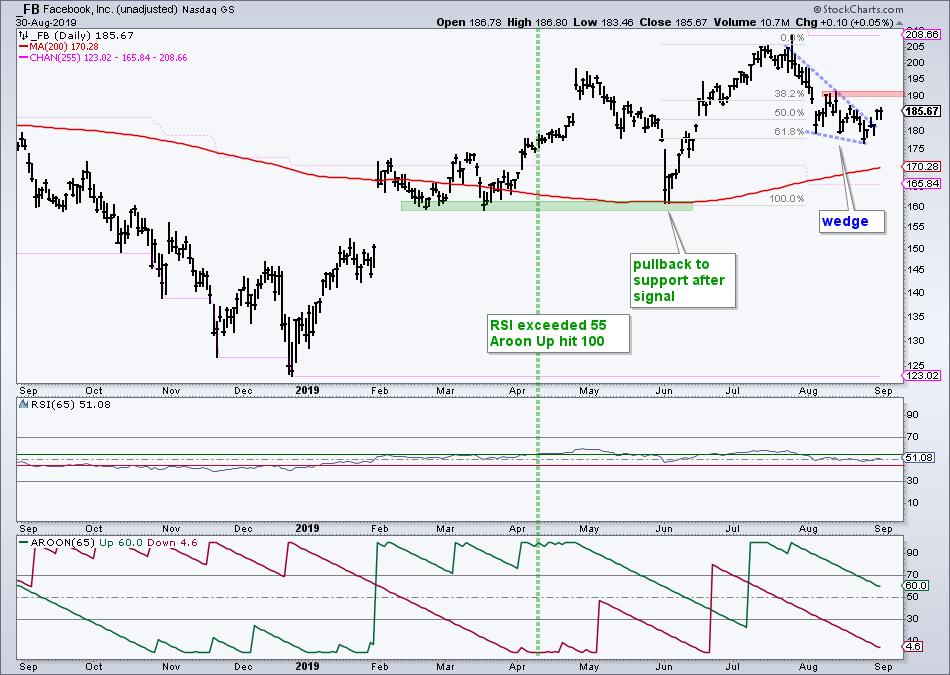 Even though Facebook did not hit a new high in July, I think it is the second strongest of the group. FB corrected over the last five weeks, but held well above its early June low. A falling wedge took shape as the stock retraced around 61.8% of its prior advance.

The falling wedge is typical for a correction within a bigger uptrend and the 61.8% retracement marks a potential reversal zone. FB turned up this week with a break above the wedge line, which, admittedly, is a subjective line. Follow through above the early August high would complete the breakout.

At this point, we can see that Microsoft, Apple, Amazon and Alphabet are consolidating on the price charts. MSFT and APPL formed triangles, while AMZN and GOOGL formed flat ranges. Watch these four clues on QQQ. Upside breakouts in three of the four would be quite bullish, while downside breaks would be bearish. FB is a bit different because of the wedge, but it too can be watched for a follow through breakout.

State of the Stock Market: SPY, QQQ and the big sector SPDRs are performing well, but small-caps and mid-caps continue to undermine the Index Breadth Model.