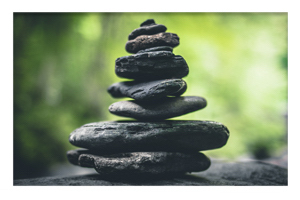 Today I am breaking my ETF chart list into five groups and showing these groups in order of performance, strongest to weakest.

After analyzing and comparing these price charts, five clear groups emerged. First, there are ETFs with very strong uptrends that look very extended. Second, there are ETFs with steady uptrends that look sustainable. Third, there are several ETFs still in uptrends, but they are below their summer highs as they consolidate after the early August decline. These three groups are in uptrends of some sort and showing some relative strength too. The last group, which includes SPY, QQQ and XLK is perhaps the most interesting at the moment.

We then get to the weaker half of the market with the last two groups. The fourth group shows weakness because the ETFs are testing their lows from late May or early June, and possibly lower highs in July. The fifth group represent ETFs in clear and present downtrends. These are the weakest ETFs in the market and not worthy of consideration.

There are a lot of charts in this commentary but keeping them grouped should make it easy to follow. Let's get started.

Check out Friday's State of the Stock Market commentary for a broad market update.

Group 1: Strong and Over Extended

The gold, silver, gold miners and Treasury bond ETFs are in strong uptrends, but they have had extraordinary runs the last 15 weeks. The first chart shows the Gold SPDR (_GLD) surging 20% since mid May. The ETF is also up some 30% since early October. 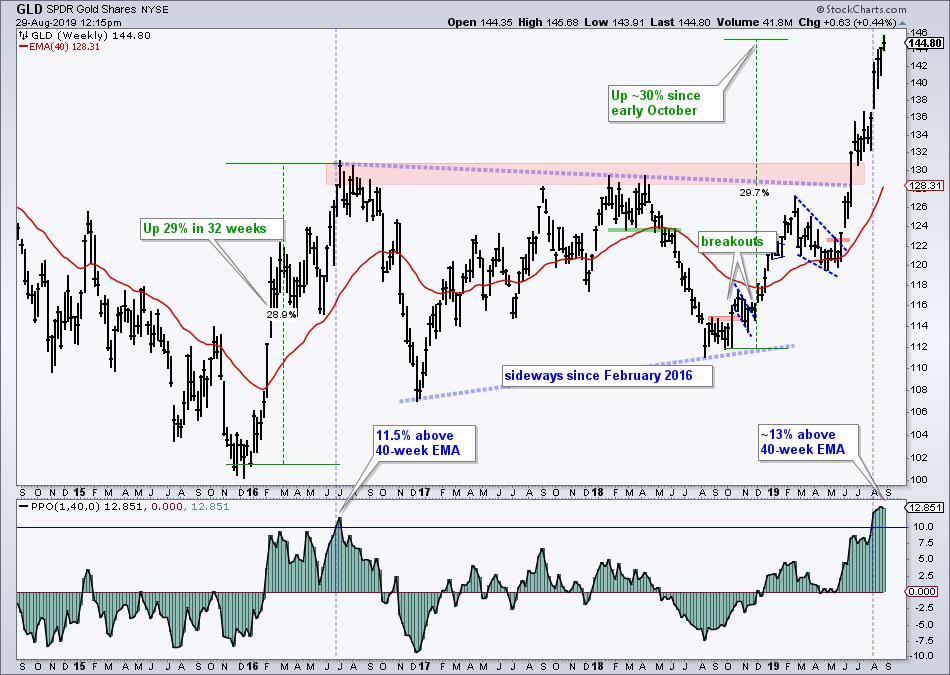 There were some short-term setups and breakouts along the way, as well as a major breakout with the surge above 130 in July. There is no denying the long-term uptrend and relative strength, but GLD is getting quite extended. Notice that price is some 13% above the 40-week EMA (PPO(1,40,0) = 13.116). This is the most in over five years.

The next chart shows the 20+ YR T-Bond ETF (_TLT) trading some 14% above its 40-week EMA. The ETF broke out earlier this year and is now up some 32% since early November. Moreover, TLT surged 12% over the last five weeks. We do not need indicators to figure out that TLT is getting dangerously frothy. 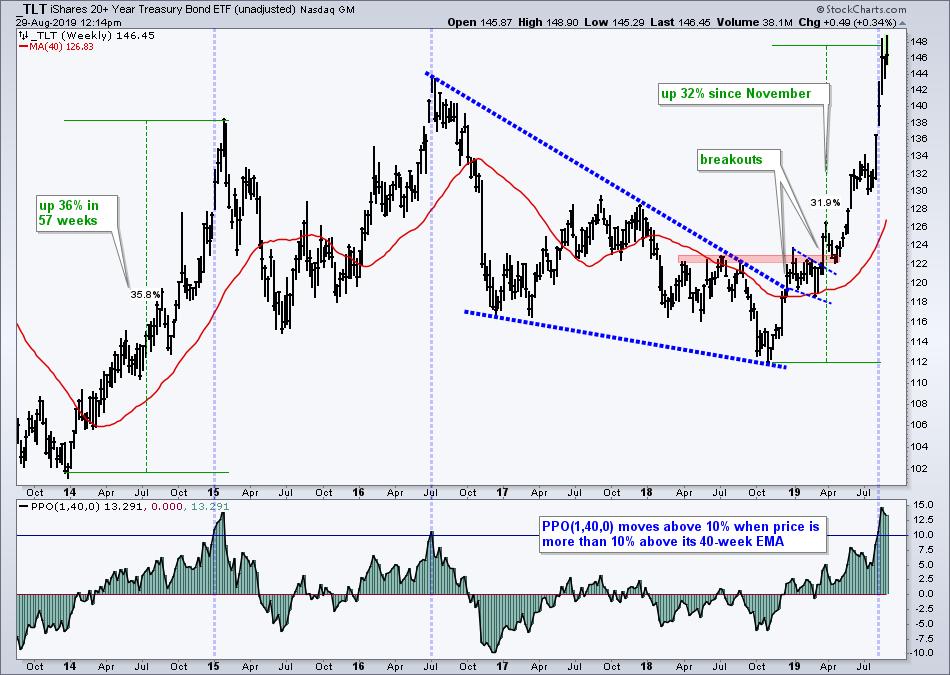 The next group shows ETFs with steady uptrends and new highs recently. These are chart leaders that are not overextended and their uptrends looks sustainable. As with any uptrend, we never know how far it will extend or how long it will last. We simply accept trend direction until proven otherwise. 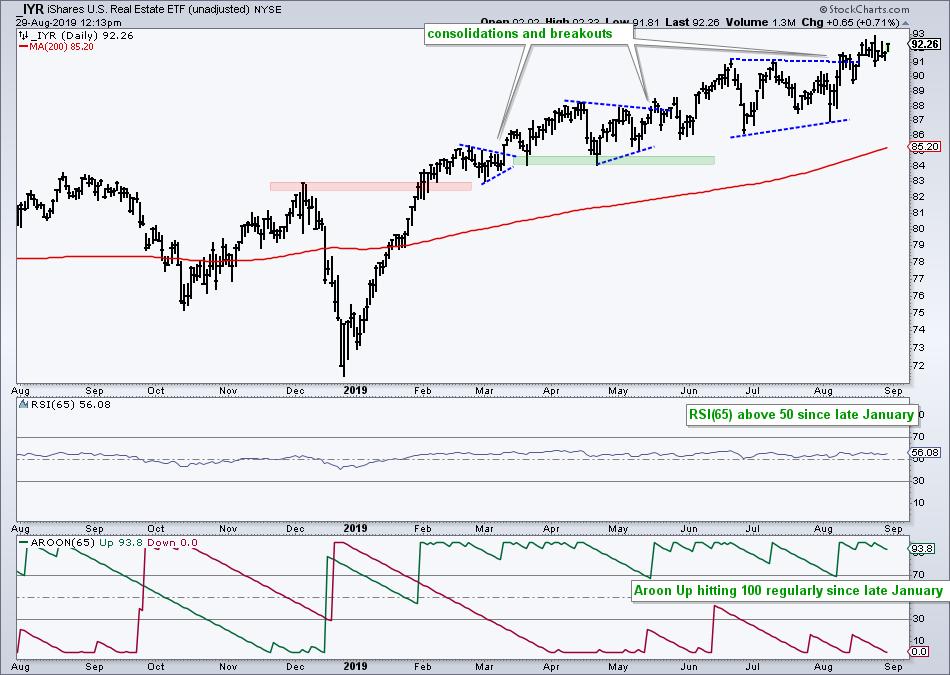 The chart above shows the REIT iShares (IYR) breaking out in late January and staying strong with consistent buying pressure. Also notice that RSI(65) moved above 55 and has remained above 50. Aroon (65) hit 100 in late January and continues to hit 100 on a regular basis. This means the stock is consistently recording 65-day highs. See this System Trader article for more details on these two indicators. 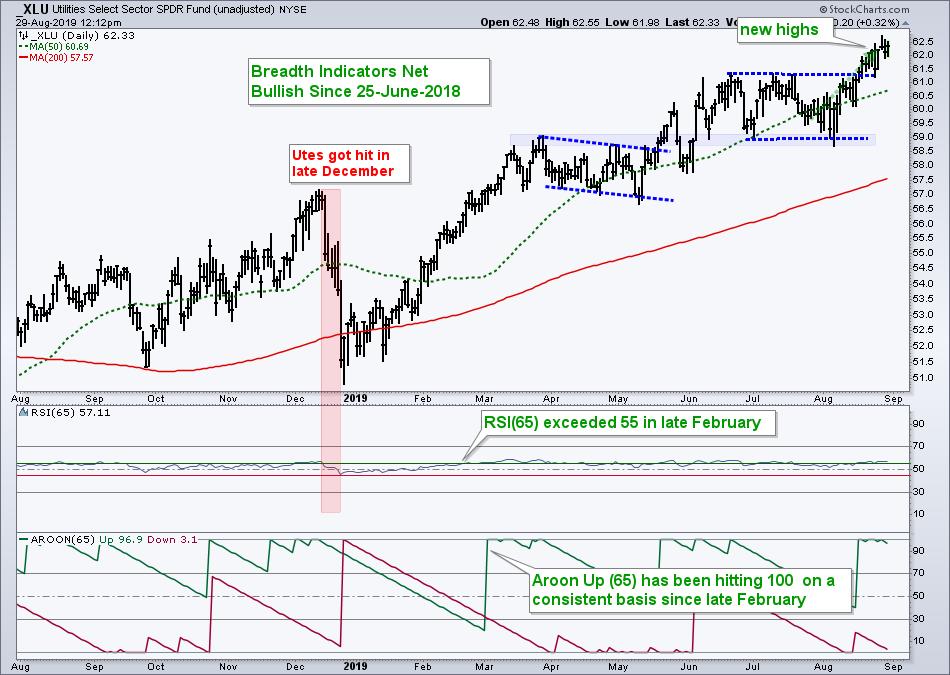 The chart above shows XLU with a consolidation breakout in mid August and new highs. Note that "breakouts" often look good on the chart, but can be difficult to trade profitably. It is often better to act on a support test, pullback or when short-term oversold. 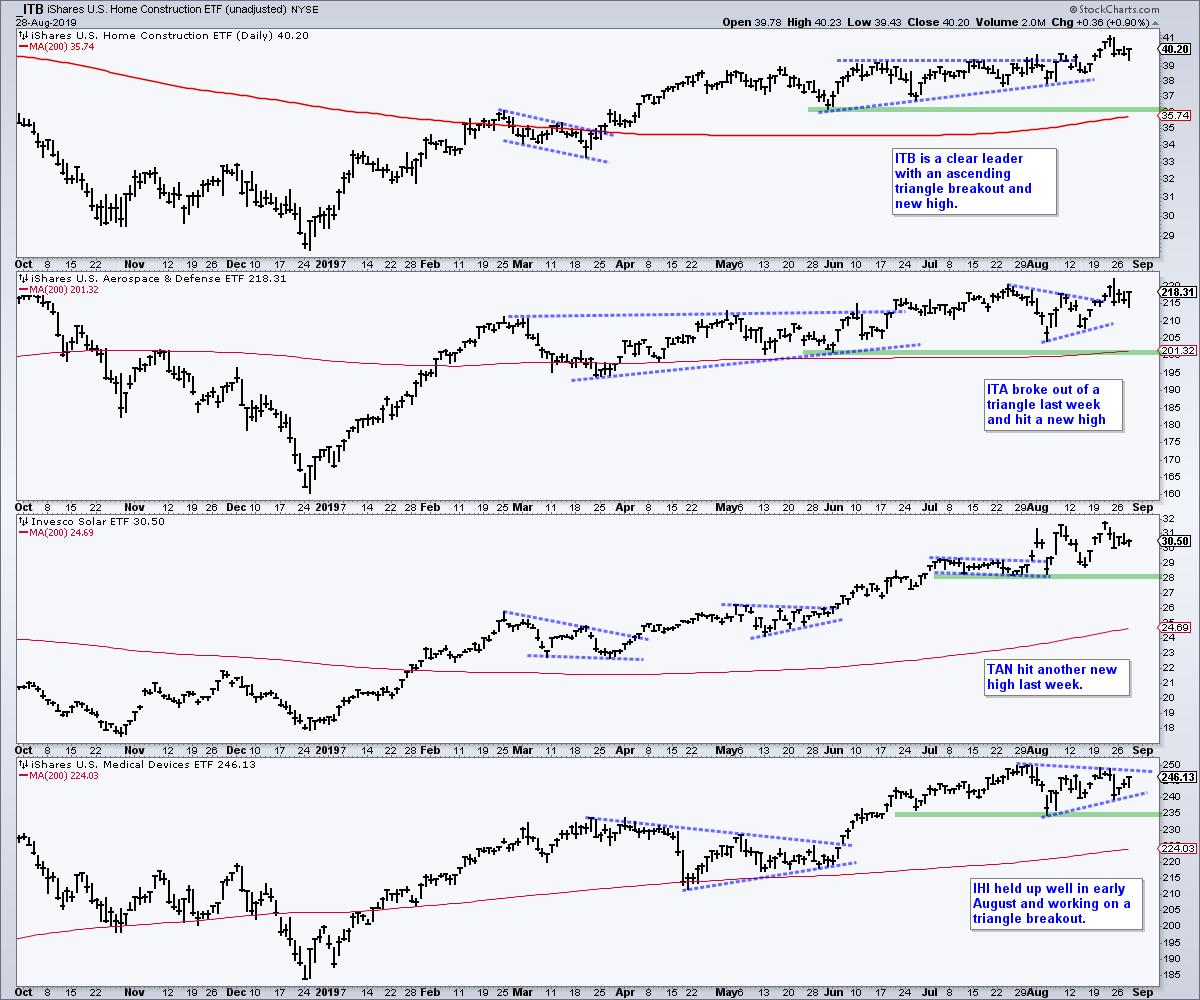 Group 3: Still in Uptrends (and interesting)

SPY and QQQ are still in uptrends. I featured the knockdown last week because SPY and QQQ consolidated after getting knocked down in early August. Both formed rising flag/wedge type patterns (blue lines), but did not continue lower after the sharp decline last Friday. Hmm....what gives?

The bigger uptrends are still the dominant forces on these charts. Yes, I know my Index Breadth Model is net bearish with five of the nine indicators on active bearish signals, but two of the three S&P 500 indicators are on active bullish signals. Weakness is concentrated in mid-caps and small-caps. SPY and QQQ hit new highs in April and July, held above their 200-day SMAs and did not even test their early June lows (higher lows). 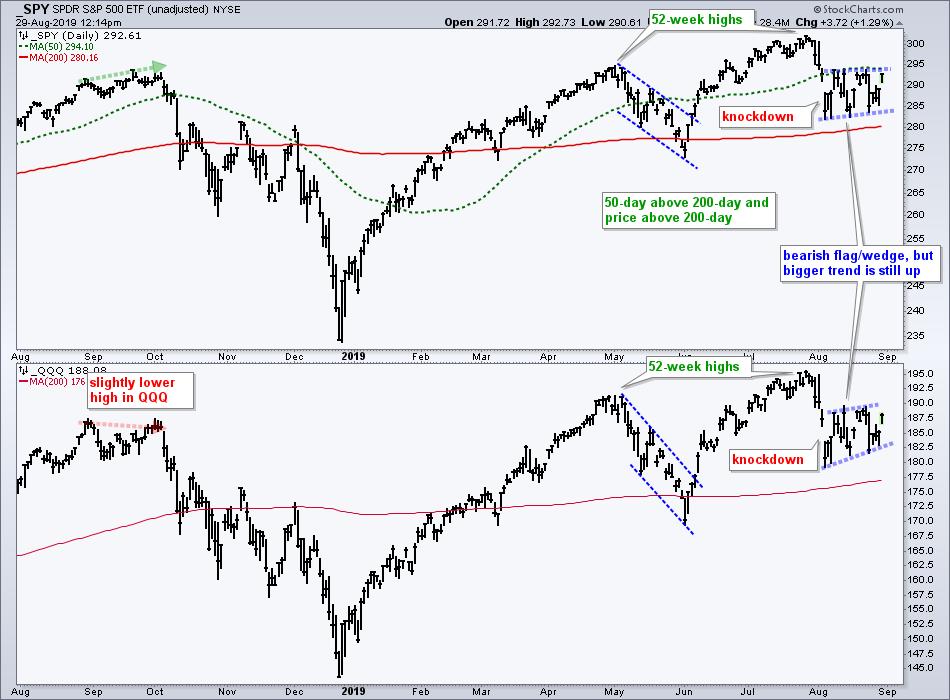 Normally, I ignore bearish patterns when the bigger trend is up and only focus on bullish setups. What if we did that now? Well, SPY and QQQ were hit hard last Friday and became short-term oversold (and near support from the prior lows). This means we have a long-term uptrend, support and oversold conditions. Furthermore, the bears took a shot at the bulls with the sharp decline last Friday, but the bulls stepped up and the mid August lows held. This resilience could set up a bounce.

Friday's lows mark the first supports to watch going forward. This is when the bears made their stand and forgot to follow through. A break below these lows would clearly confirm the bear flags/wedges and signal a continuation of the August decline. 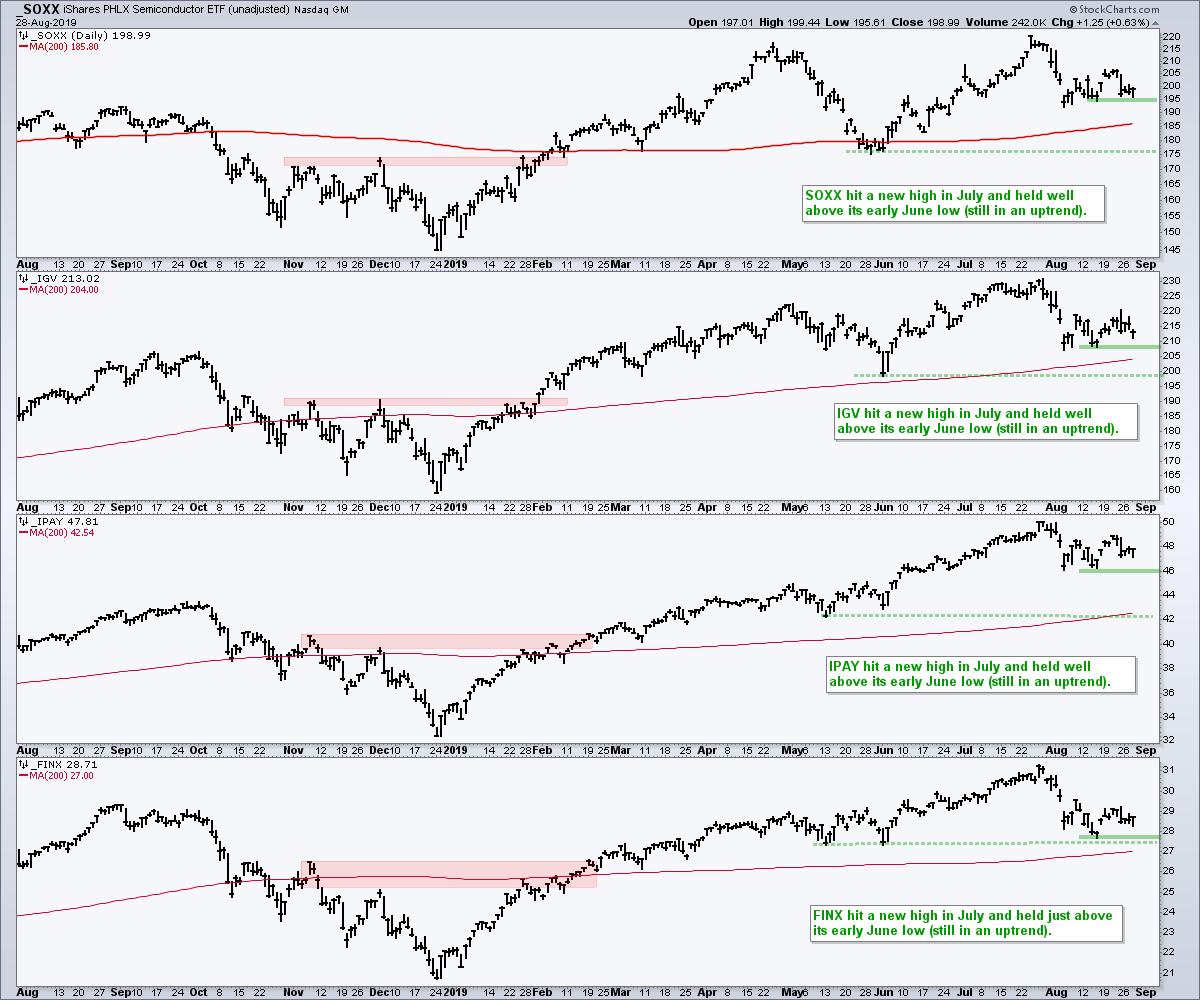 The chart above shows the Semiconductor iShares (SOXX), Software iShares (IGV), Mobile Payments ETF (IPAY) and Fintech Thematic ETF (FINX). All four hit new highs in July and three of the four held well above their early June lows during the August decline (and their rising 200-day SMAs). FINX held just above. All four are still in uptrends and consolidating after the early August decline. Assuming the bigger uptrend is the dominant force at work here, these leaders could be poised to bounce and continue their uptrends. The solid green lines mark first support to watch going forward.

The next group shows charts that are neither bullish nor bearish. They have either gone nowhere (XLI, MDY) or fell all the way back to their early June low (XLF). Technically, these could be poised for a bounce off support, but they are clearly not leaders when compared to the charts above. Admittedly, the reward-to-risk ratio is positive when a stock or ETF is trading right at support. However, the broad market environment is mixed, at best. 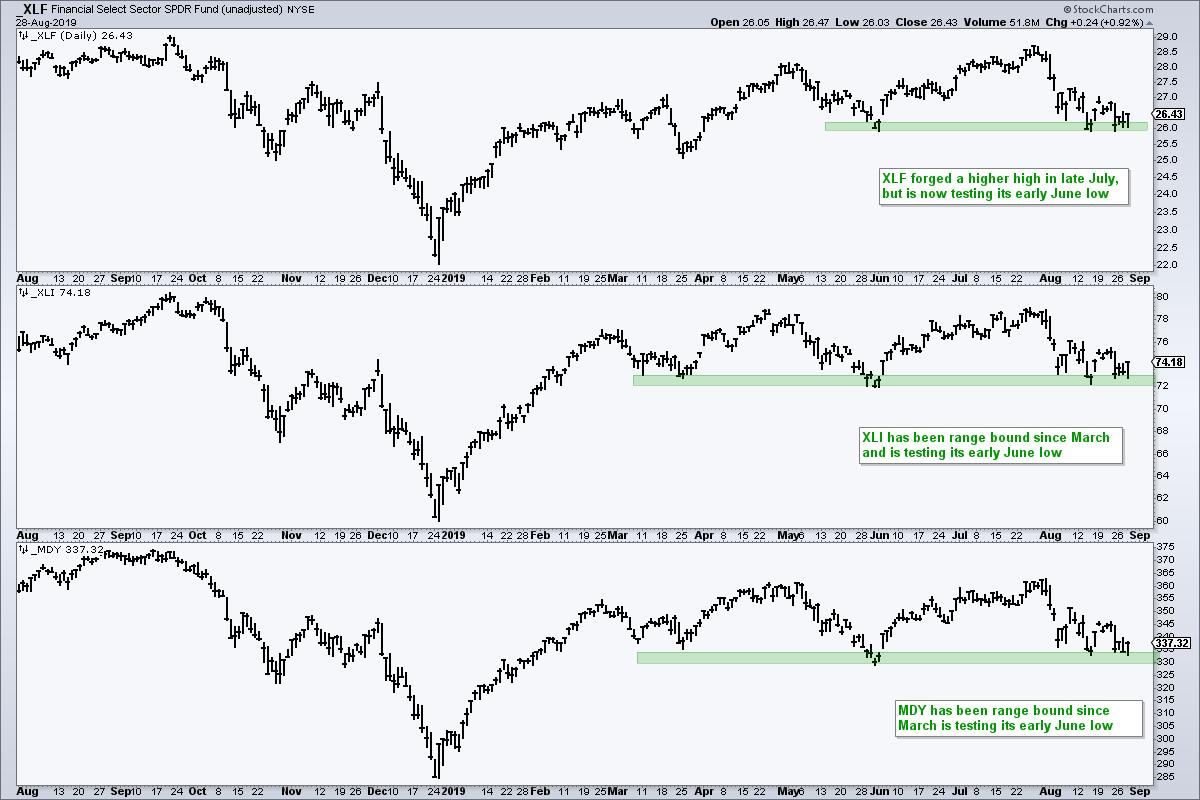 Now we get to the weakest group. These are stocks that did not record higher highs in spring/summer and broke below their May-June lows. They are laggards on the price chart and on my avoid list for now. The chart below shows IWM with lower lows and lower highs the last four months. Admittedly, the ETF managed to bounce right after the lower low (support break) in late May. Funny how support breaks lead to bounces. Note that we have a similar support break now.

The Regional Bank SPDR (KRE) peaked in late February, and then formed lower highs in May and July. There is no uptrend here so let's move along. The Retail SPDR (XRT) is one of the weakest industry group ETFs with a 52-week low. 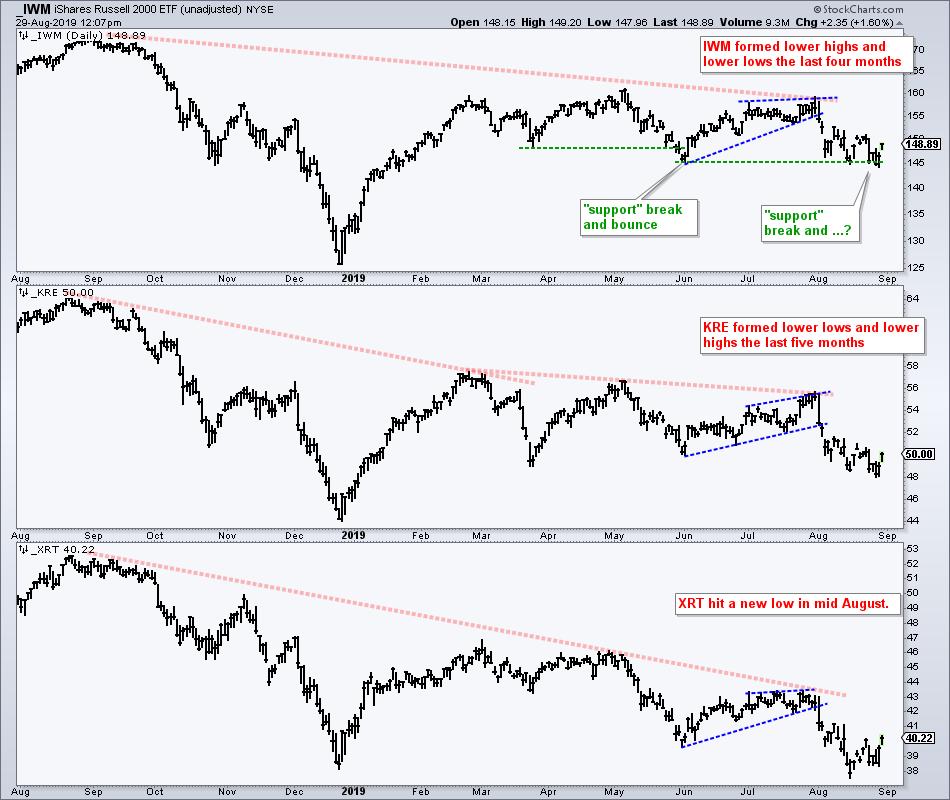 Even though small-caps, regional banks, retailers and a dozen other industry group ETFs are performing poorly, the S&P 500 is still within 5% of an all time high. Why? Because these groups have little influence on the S&P 500 and the key large-caps that drive the S&P 500.

Check out Friday's State of the Stock Market commentary for a broad market update.