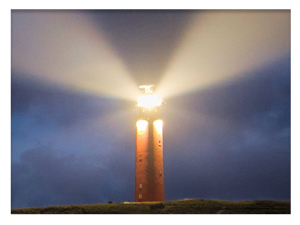 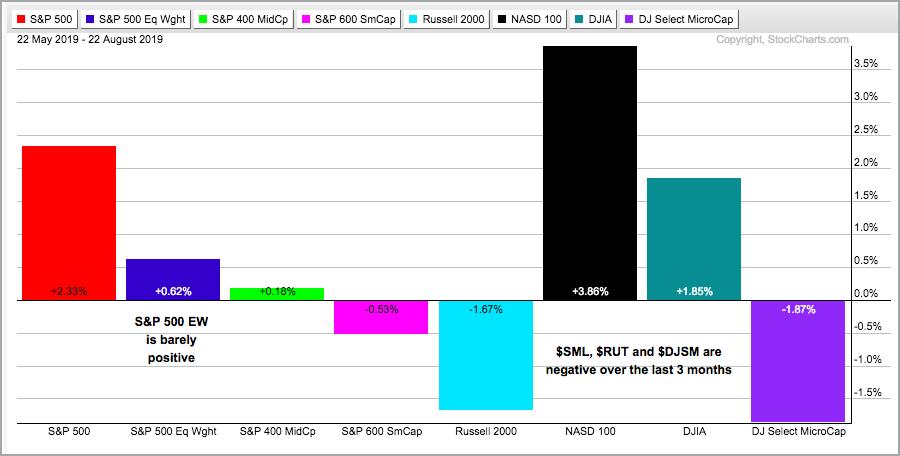 Even though the S&P 500 is positive on the 9 and 12 month timeframes, there was a sizable dip in the fourth quarter of 2018 and the index was down 19.78% from its September closing high on December 24th. Yes, the index was .23 away from bear market territory (down more than 20%) and rallied back with a vengeance. Sorry, but you cannot measure correction territory or bear market territory with a simple percentage move in one index. 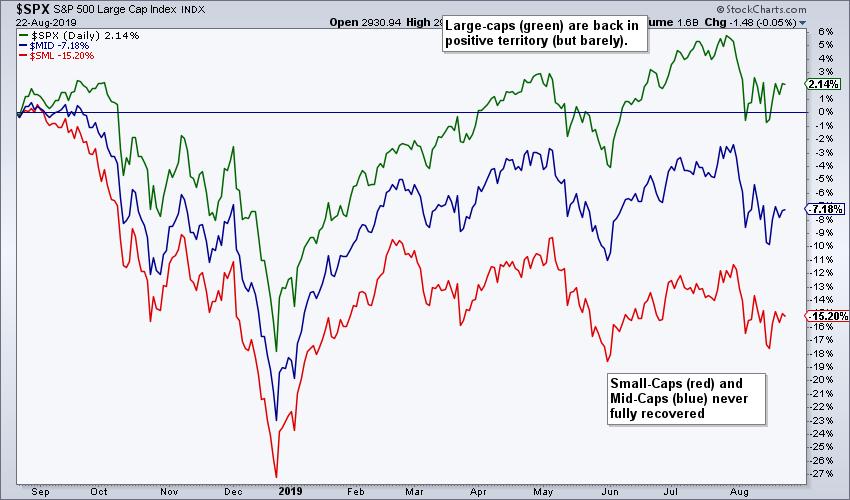 The chart above shows one year performance for these three since August 2018, which is when the S&P Small-Cap 600 peaked. Despite double digit gains since the December low, the S&P Small-Cap 600 (red line) and S&P Mid-Cap 400 (blue line) never fully recovered from last year's decline. The S&P 500 turned positive again in April and again this summer, but it is up just 2.14% over the past year. It would not take much to turn the 1-year Rate-of-Change negative again.

Technically, the S&P 500 SPDR (SPY) remains in a long-term uptrend. The index hit a new high in late July and remains well above the prior reaction low (trough in early June). Thus, price action still shows higher highs and higher lows. In addition, the 20-day SMA is above the 200-day SMA and price is above the 200-day SMA. The S&P 500 breadth indicators are still net bullish, but the Index Breadth Model is net bearish because of mid-caps and small-caps (see below). What a mess! 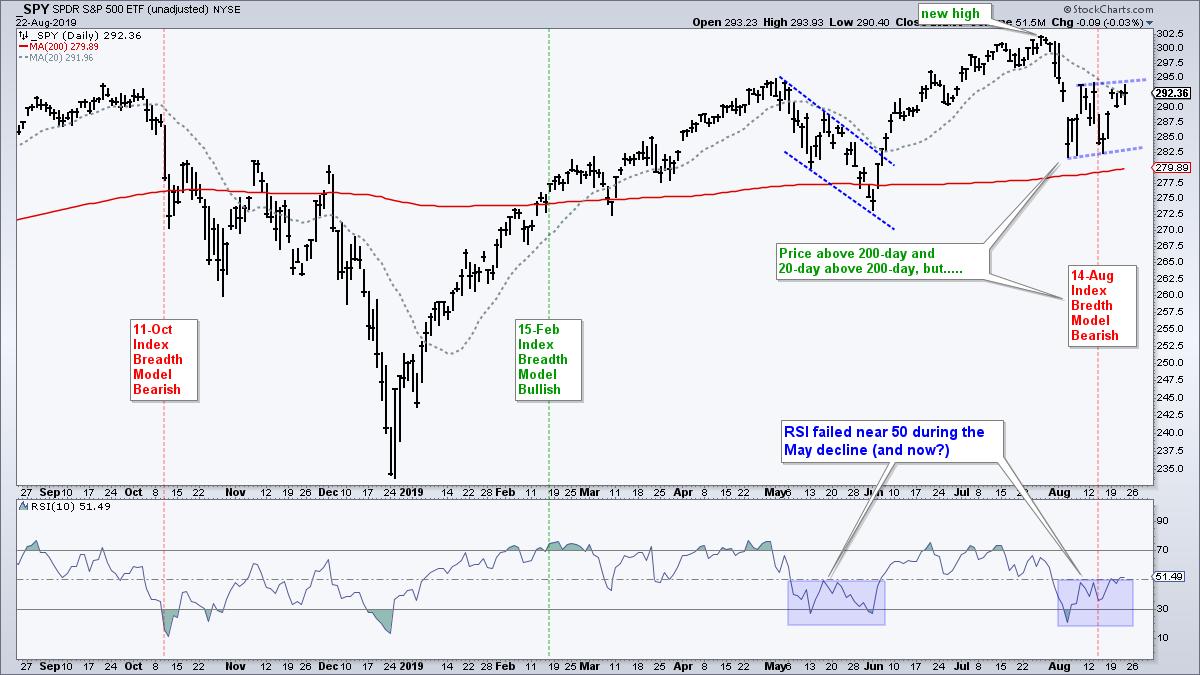 Short-term, anything could happen and only active intraday traders should be active, which does NOT include me. Trading has turned quite choppy here in August and some guy named Powell is speaking in some place called Jackson Hole. After the sharp decline in early August, the index consolidated with a rising flag type pattern. SPY is holding near the top of this range after a two day bounce. There is some resistance in the 295 area from the mid August highs and 50-day SMA (not shown). In addition, RSI is near 50, which is the make-or-break area for a short-term bounce. 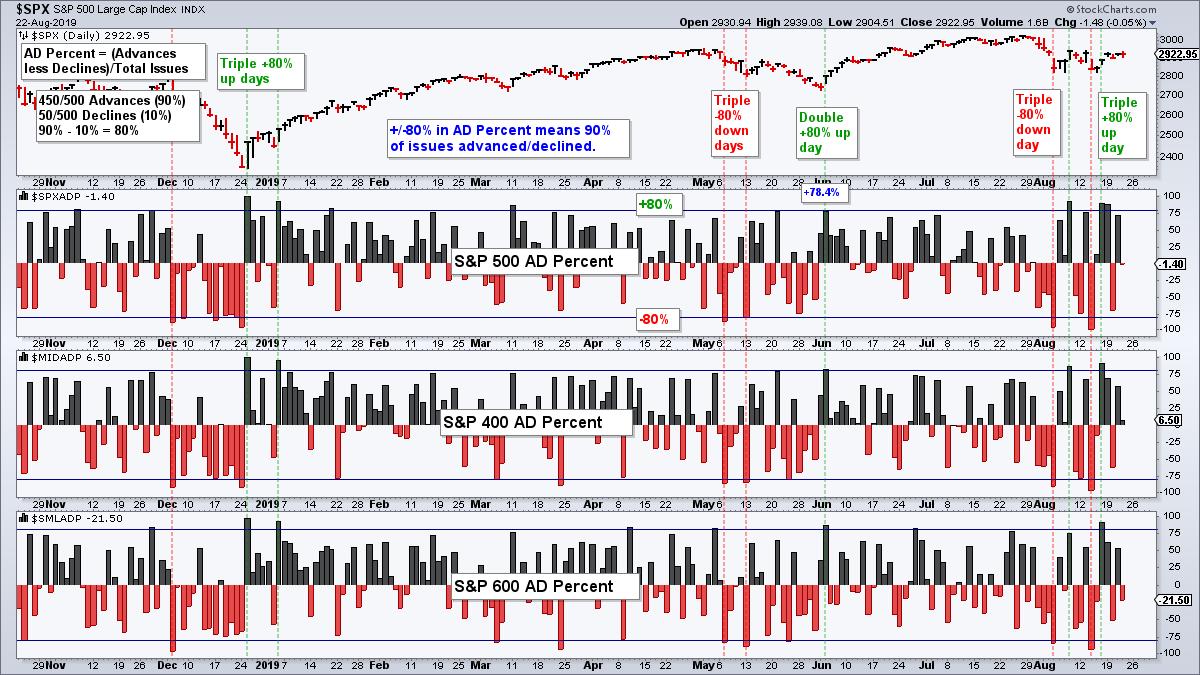 I smooth out the daily AD Percent values with a 10-day EMA for medium-term signals in my index breadth model. A bullish signal occurs with a move above +30%, while a bearish signal triggers with a move below -30%. All three indexes triggered bullish breadth thrusts in early January. The 10-day EMA of S&P 500 AD Percent ($SPXADP) triggered a bearish breadth thrust on August 5th, but the S&P Mid-Cap 400 and S&P Small-Cap 600 did not. $MID came close though. As a group, this breadth thrust indicator is still net bullish because two of the three are on bullish signals. 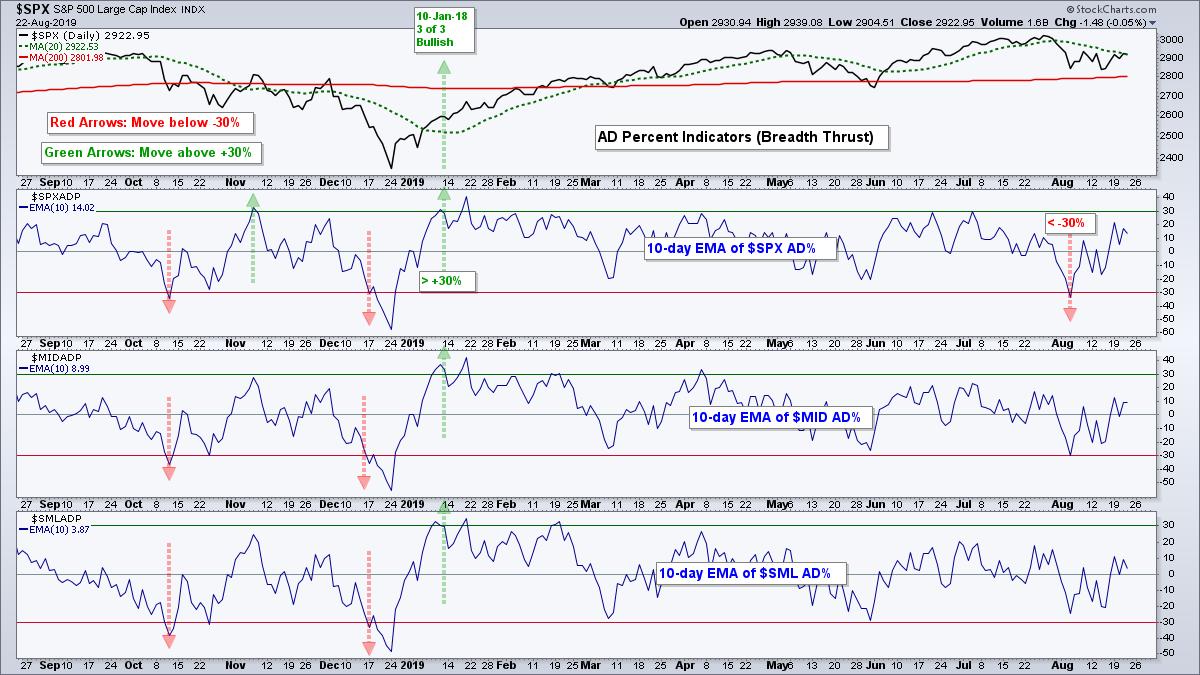 There is no change in the Index Breadth Model with five of the nine indicators remaining on active bearish signals. Blame High-Low Percent and %Above 200-day EMA. The S&P 500 is still net bullish with two of the three indicators on active bullish signals, but the S&P Mid-Cap 400 and S&P Small-Cap 600 remain net bearish. This suggests that the broader market is split right now with a bearish tilt (5/9 = 55.55%).

You can learn more about these indicators with the following links: AD Percent, High-Low Percent, %Above 200-day EMA and YouTube video covers all three.

There is not much change in the Sector Breadth Model with only one new signal the smallest sector. XLB High-Low% ($XLBHLP) moved above +10% to reverse its bearish signal from the previous week. This happens with sectors with a small number of stocks. With 28 stocks, XLB only needs 3 new highs for XLB High-Low% ($XLBHLP) to exceed +10%. Furthermore, the sector really is a hodgepodge of stocks: chemicals, mining, steel, construction materials and containers & packaging. I am not sure if the last group really belongs (BLL, AMCR, AVY, PKG, WRK, SEE, IP). What does Packaging Corp of America have in common with Freeport McMoran or Nucor? 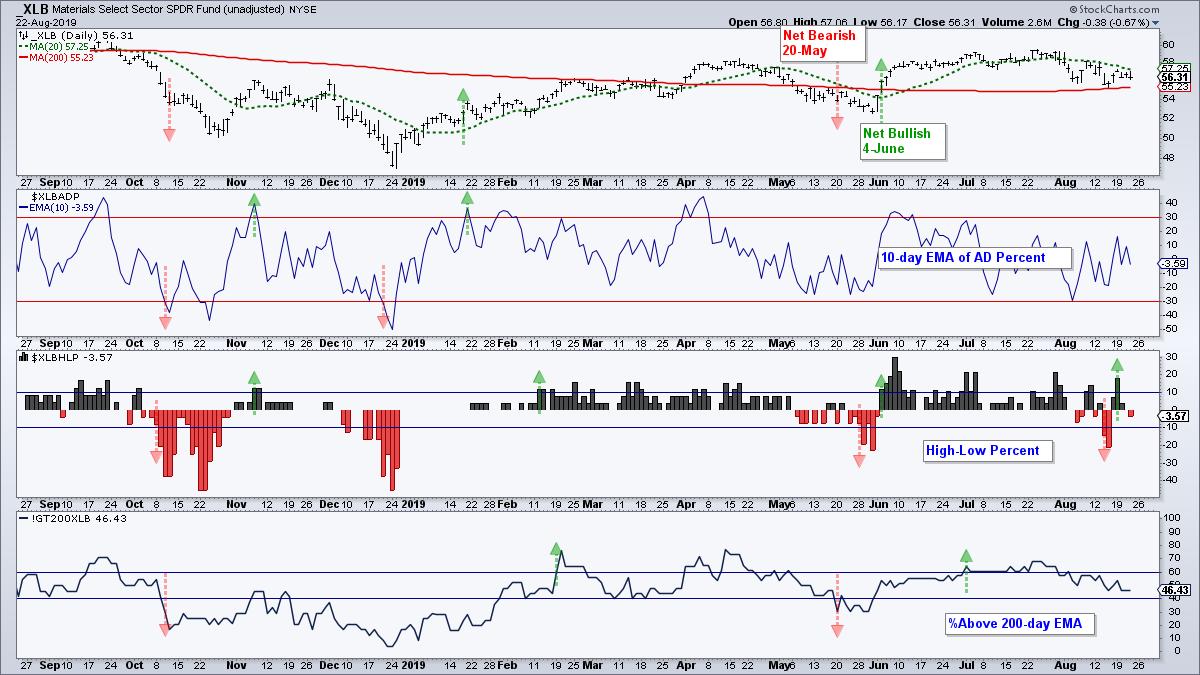 XLB only accounts for a measly 2.70% of the S&P 500 and has little effect on the Sector Breadth Model, and the broader market for that matter. The Sector Breadth Model reflects a split market (S&P 500) with a slight bullish tilt. 6 of 11 sectors are net bullish, but four of the five offensive sectors are net bearish (Finance, Communication Services, Consumer Discretionary and Industrials). On a positive note, the biggest sector (Technology 22.19%) and the second biggest sector (Healthcare 14.01) remain net bullish, as do the three defensive sectors (Utilities, REITs, Staples). The sum of the weighted signals is still positive (+9.62%) and this suggests a bullish tilt to the S&P 500. Note that this sum ranges from -100% to +100%. Thus, +9.62% puts it in the lowest positive decile. 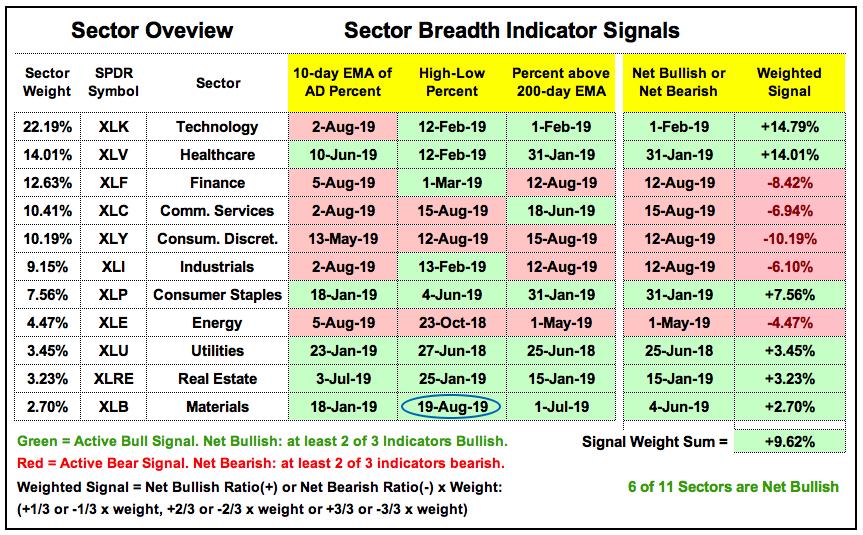 The S&P 500 SPDR (SPY) and Technology SPDR (XLK) are in a long-term uptrends and their breadth indicators are net bullish. This alone tells us that conditions are not that bad right now. The S&P 500 accounts for some 80% of the total US stock market and Technology represents the biggest sector in the index.

The broad market environment deteriorates when we look further. The breadth indicators are net bearish for the S&P Small-Cap 600 and S&P Mid-Cap 400, as well as for the Industrials, Finance, Consumer Discretionary and Communication Services sectors. Weakness in small-caps and mid-caps is not that big of a deal, but weakness in these four S&P 500 sectors is a big deal.