Today we will rank and group the key ETFs that I follow. Instead of showing all five groups, like in last week's commentary, I will focus the middle three groups, which I think are the most interesting and still have potential. I am not even going to cover the laggards or ETFs in clear down trends, such as XLE, KRE, XRT and IBB. We can only focus on so much at one time and I prefer to focus on the leaders. This is an update to last week's ranking.

While I would normally shun bullish setups when the broader market environment is bearish, some sector and industry group ETFs still sport constructive charts (new highs, long-term uptrends). In addition, the Index Breadth Model is tilted bearish with five of nine indicators on active bearish signals, while the Sector Breadth Model remains net bullish. SPY and QQQ are also in uptrends. This means there are pockets of strength to be found and we are not in a fully-fledged bear market.

I am taking some vacation over the next ten days (starting Friday, September 6th). I will continue to provide updates, but they will be shorter and less frequent. The Index Breadth Model and Sector Breadth Model will be monitored and updated when warranted.

The first group consists of ETFs that have come too far too fast and look vulnerable to a corrective period. They are clearly in uptrends, but double digit gains in just a few months make them vulnerable. For example, the Gold SPDR (GLD) is up around 20% in just over three months and the 20+ YR T-Bond ETF (TLT) is up some 24% in six months. This situation is similar to when the S&P 500 in January 2018, when it was up 18% in five months. 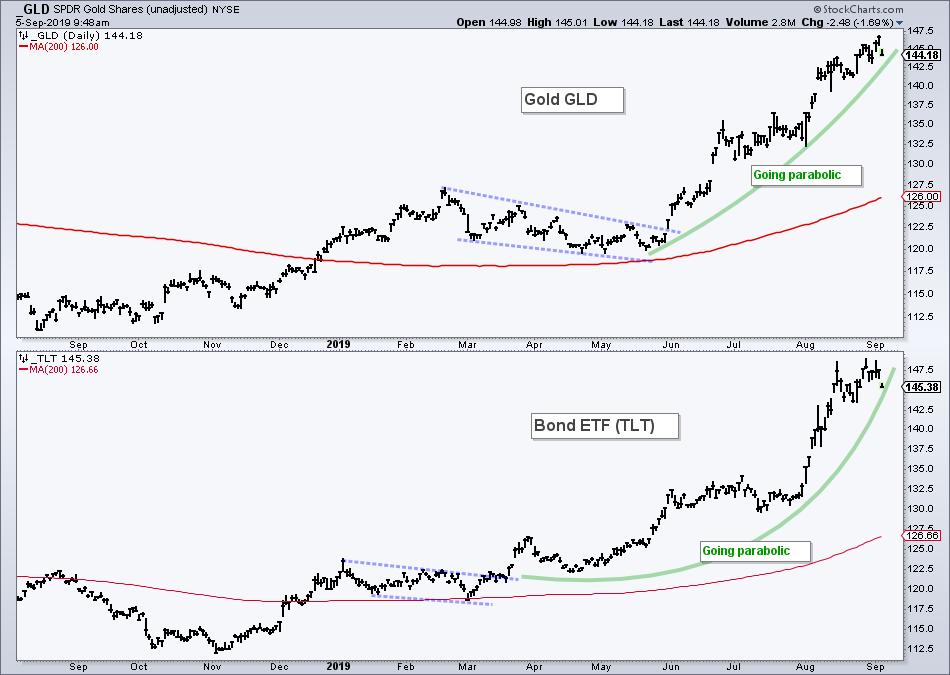 ETFs recording new highs in late August and/or early September have the strongest price charts. This group includes the three defensive sectors as well as a smattering of industry group ETFs. Some may consider them overbought, but they are clearly not as overbought as GLD or TLT. I already covered the Utilities SPDR, Real Estate SPDR and Consumer Staples SPDR on Tuesday so we will focus on the industry group ETFs today.  Note that I will show the chart first and then some short commentary. 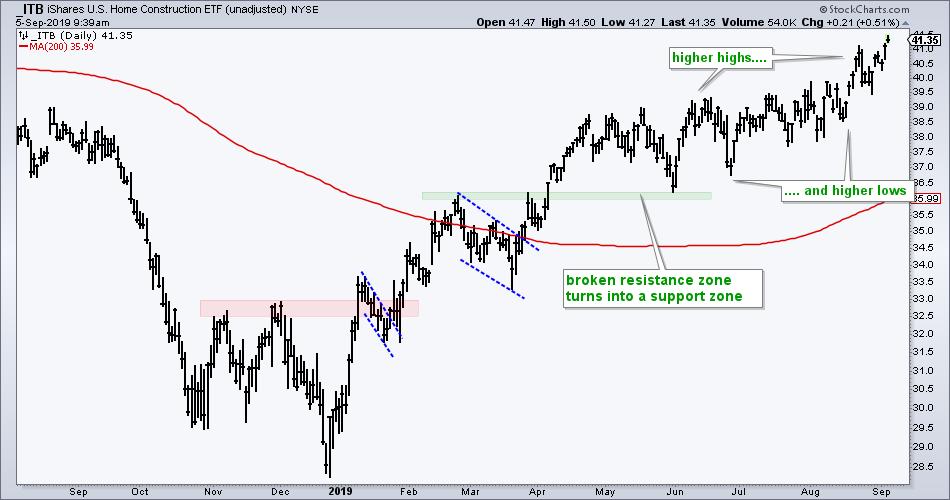 While SPY weakened in August, the Home Construction iShares (ITB) kept right on trucking with new highs in mid and late August. Talk about relative and absolute strength! The ETF hit another new high on Tuesday and remains in a clear uptrend. 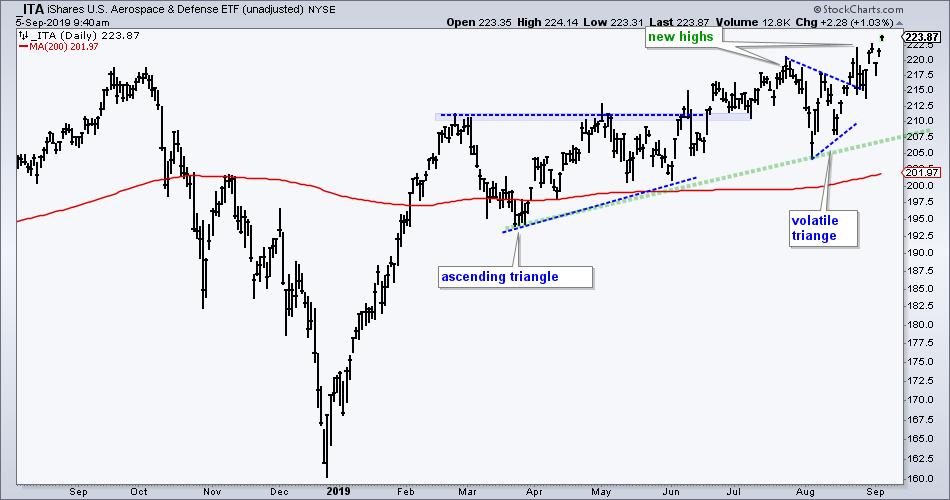 The Aerospace & Defense iShares (ITA) hit new highs in July and then formed a volatile triangle consolidation in August. A consolidation within an uptrend is typically a bullish continuation pattern and ITA broke out with a surge in late August. SPY was still stuck in a trading range in August, but ITA was breaking out again. Another sign of relative and absolute strength. 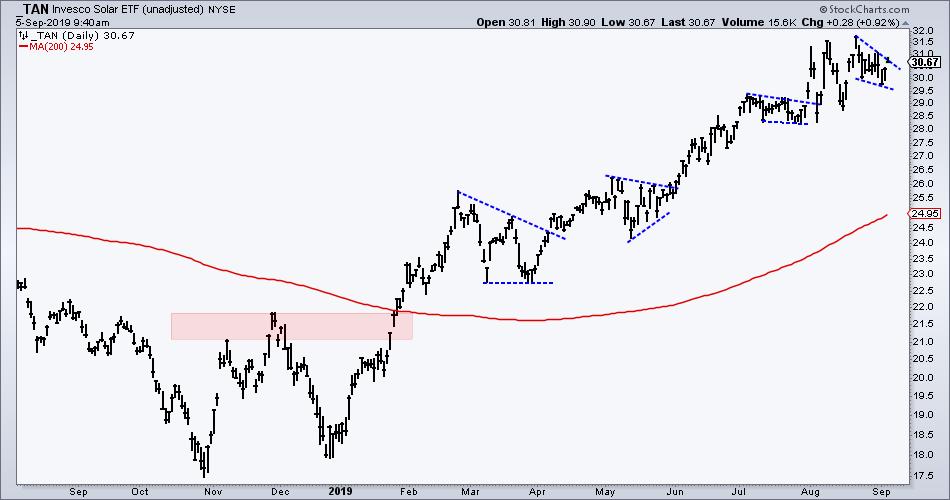 I have no idea why the Solar Energy ETF (TAN) is so strong, but it is also a clear leader with new highs in August. The ETF broke out in January and then moved higher the next seven months with a few consolidations along the way. Most recently, the ETF hit a new high in late August and formed a small falling wedge. This is another bullish continuation pattern to watch for an upside breakout. 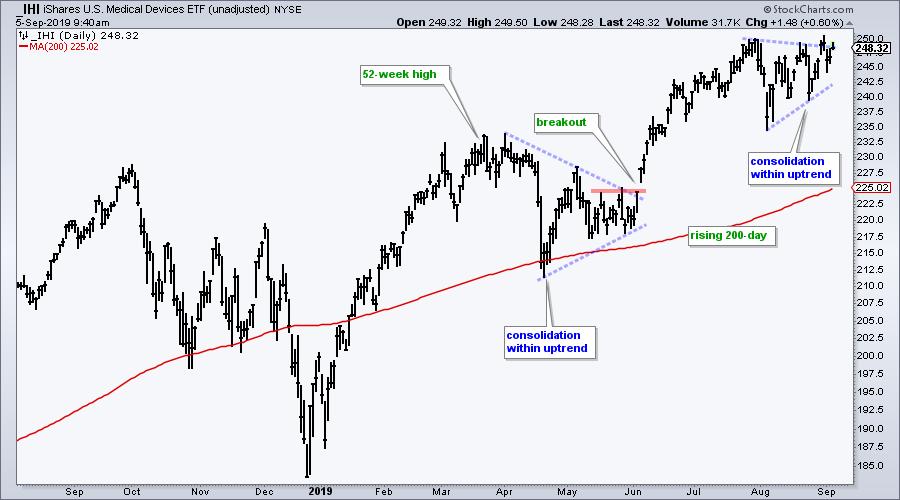 The Medical Devices ETF (IHI) also recorded a 52-week high in late August, and performed much better than SPY during the month. Overall, a triangle consolidation formed after the late July high and this is a bullish continuation pattern. Even though the first breakout attempt did not stick, the big trend is clearly up and IHI is a clear leader.

The next charts cover ETFs with uptrends overall, but they are still below their summer highs. Technically, they are not the leaders because there are stronger charts out there (like the four above). Nevertheless, this group is quite interesting because their corrections could be ending. Note that many corrected with a short sharp decline in early August and firmed immediately. 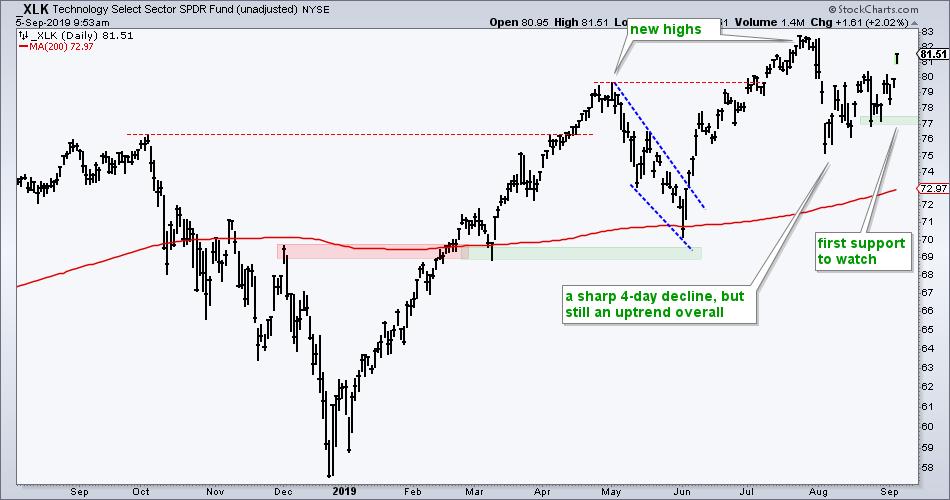 Here is something I need to pound into my head. Sharp pullbacks within uptrends are more of an opportunity than a threat. XLK hit a new high in July and never even tested its 200-day SMA with the sharp four day decline in early August. The bigger uptrend was never in doubt so I should NOT have been drawing a rising wedge in August. A rising wedge is a bearish continuation pattern and I should be ignoring bearish patterns when the bigger trend is up. Phew! I feel better now. In any case, XLK looks fine as long as support at 77 holds. 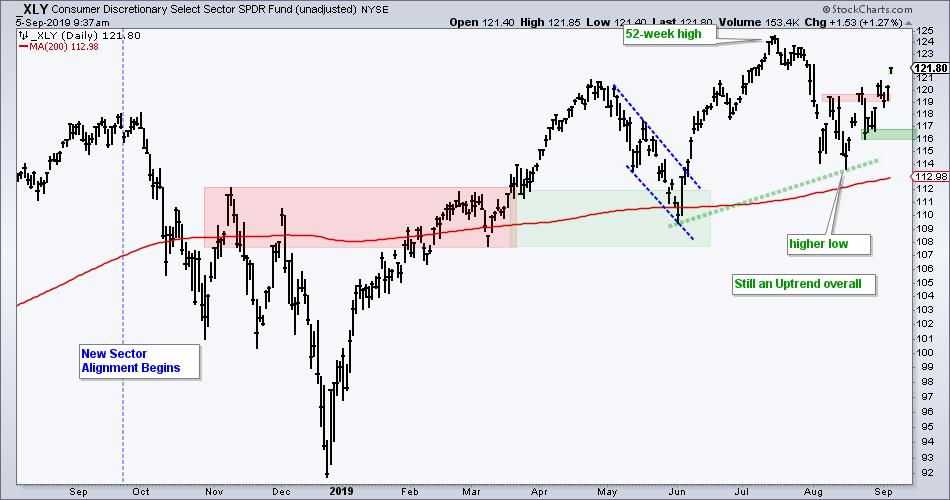 The Consumer Discretionary SPDR (XLY) looks even stronger than XLK. First, XLY also hit a new high in July and held above the 200-day EMA during the August pullback. XLY is stronger because it is already breaking above its mid August highs. It looks like the correction has ended and the bigger uptrend is resuming. Chartists can watch support at 116 for the first signs of trouble. 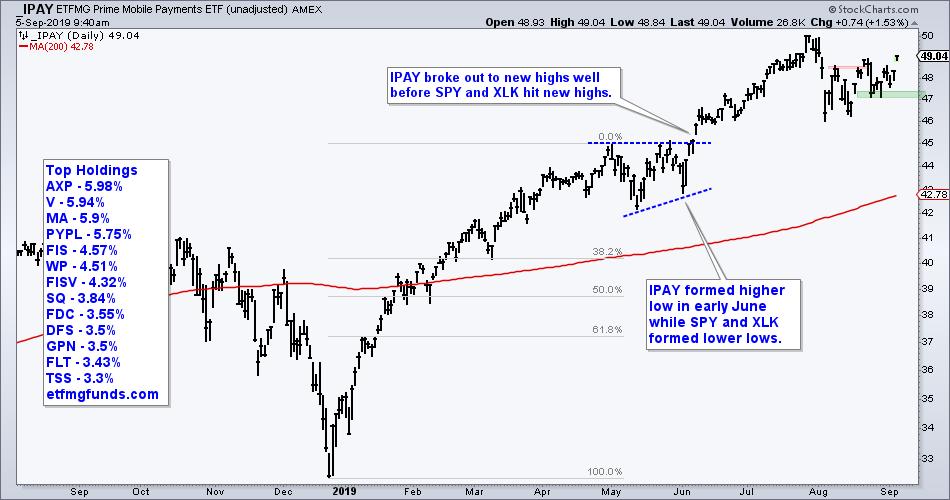 The Mobile Payments ETF (IPAY) took a hit in early August with the rest of the market, but held WELL above its early June low and rising 200-day. The ETF firmed in the 46 area in the first half of August and is working its way higher the last three weeks. A close below 47 would call for a re-evaluation. 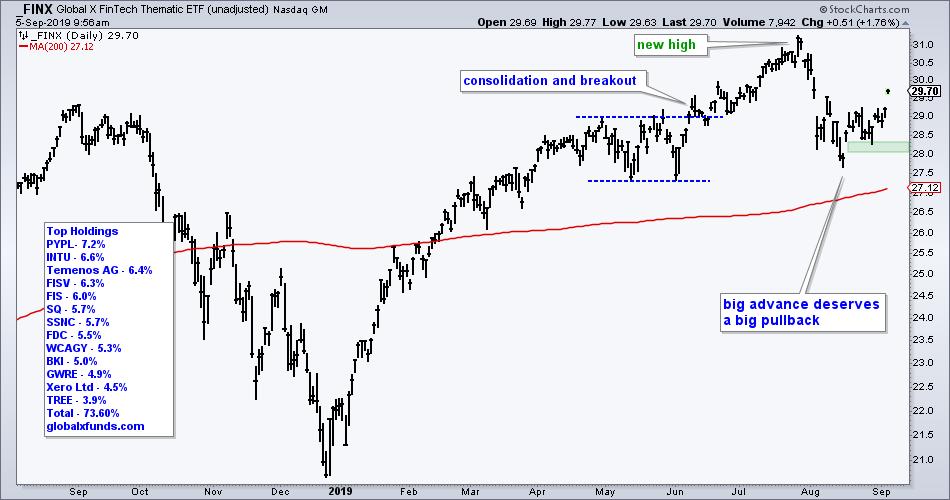 The Fintech Thematic ETF (FINX) started leading in May when it hit a new high in late May and held the mid May low in early June. In contrast, SPY fell the entire month of May. FINX zoomed to new highs in June-July and then corrected pretty hard in August. Even so, the bigger trend is clearly up and this means the pullback more of an opportunity than a threat. FINX gapped up in mid August and this gap is holding (green zone). A close below 28 would call for a re-evaluation. 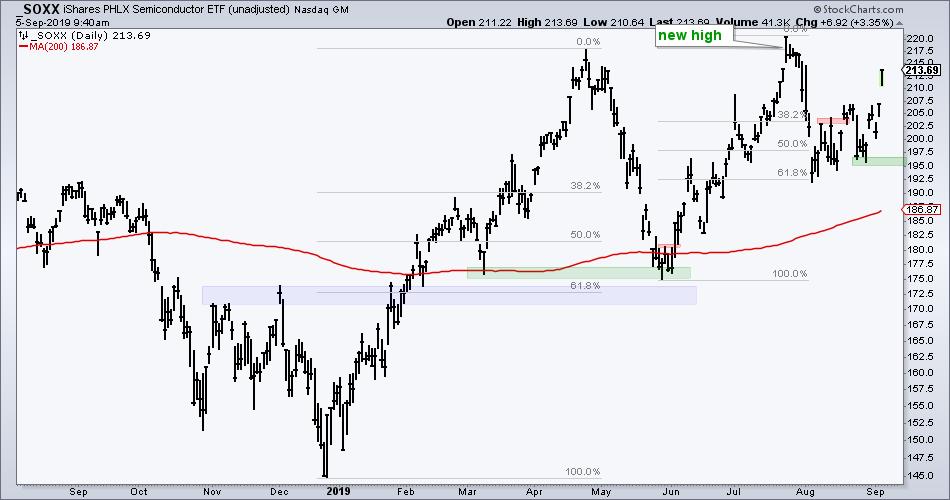 And last, but not least, the Semiconductor iShares (SOXX) hit a new high in July and then fell sharply in early August. The decline is sharp in percentage terms, but the ETF did manage to bounce near the 61.8% retracement. The mid August bounce exceeded the early August high (red zone) and the ETF even gapped up last week. The correction appears to be ending and chartists can watch 195 for a re-evaluation.

Other Corrections within Uptrends:

Testing Support and Turning Up 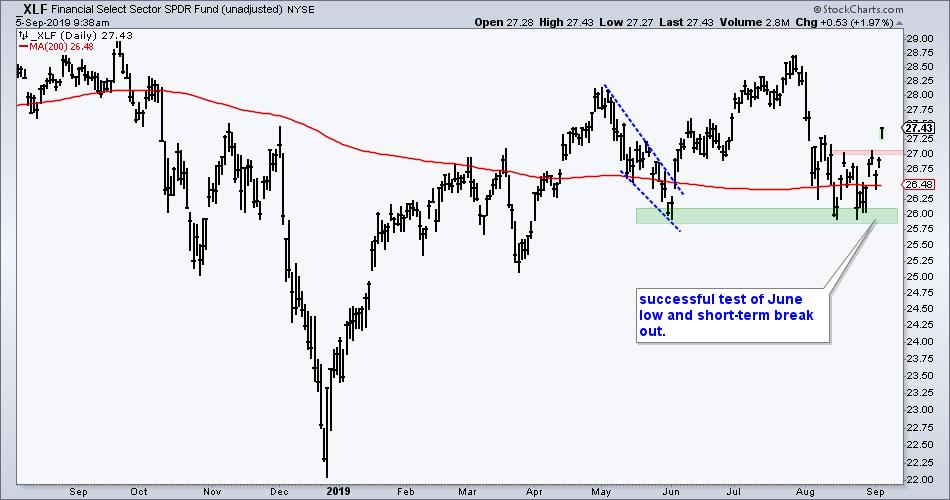 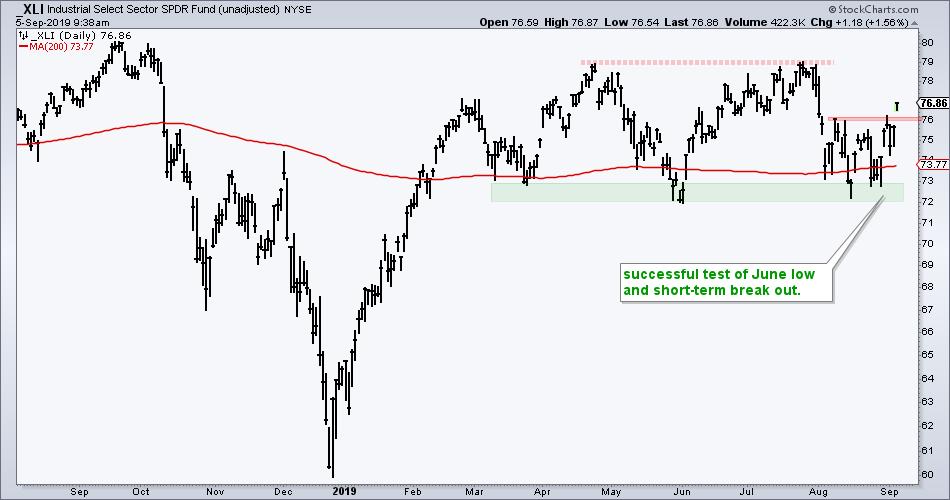 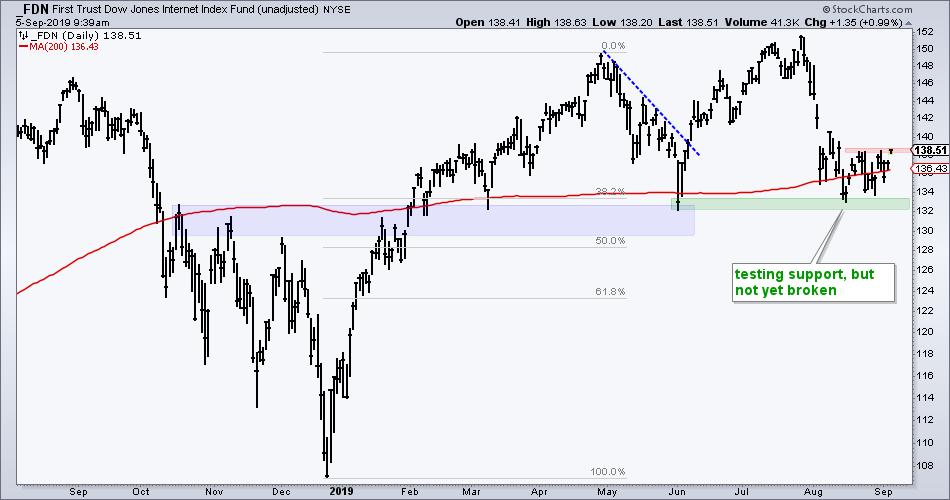