The Swiss Franc ($XSF) is an important currency in Europe. During the Greek crisis back in 2011, the Swiss Franc soared in the heat of the crisis. It immediately plummeted back. It was a goto currency in times of stress, but it also mimics some of the other European currencies. Let's look at the long cycle weekly first.

We can see that the Swiss currency has become more valuable since the Y2K top in the equity markets. The Swiss Franc was in a down trend and reverted to an up trend at the turn of the century. There was some long term resistance marked at 88 based on the peak in 2005. More importantly, the Swiss Franc had money moving to it during the early parts of the financial crisis in 2008, but really started plummeting in the 3rd quarter 2008. As the US equity markets topped in the financial crisis, the Swiss Franc broke through resistance going up. It rolled over and fell below the established uptrend line in late 2008, early 2009  and retested the low in 2010. The 85-100 level was the dominate range during the financial crisis through 2010. 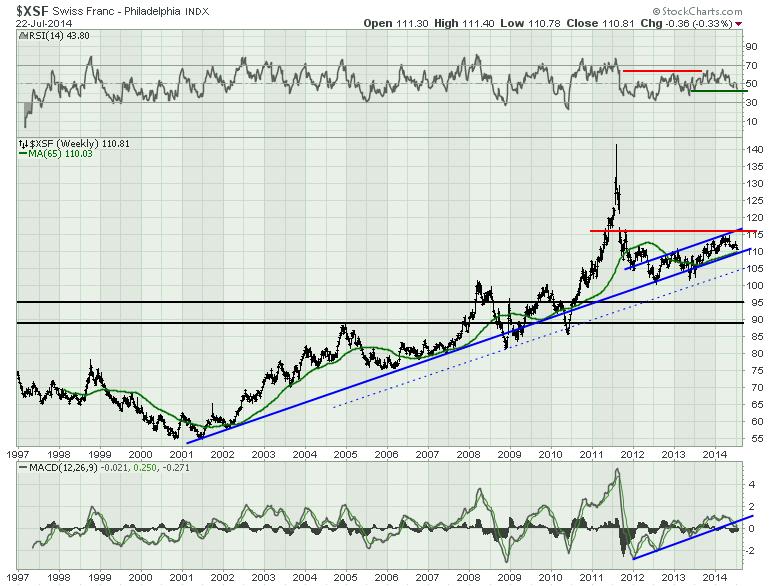 So the big picture is the Swiss Franc is in a 13 year uptrend and currently near the support line for the trend. What happens next? Lets zoom in on the shorter weekly chart.

It gets a little busy, but look at the RSI first. The recent push down is the weakest in a year so this is very important. If the Swissie is going to stay in trend, it will have to bounce very soon. Moving down to price, I have drawn horizontal support in orange. It is also the junction of the up trend line and the 65 week MA.  I would suggest the Franc is at a critical level here. If it breaks, it would imply significant weakness. There is a case for the last year above the orange line to be a head/shoulders topping pattern, especially with the junction of the trend line and the 65 week moving average all marking the right side termination point of the pattern. We'll zoom in on that on the daily after we finish Chart 2. 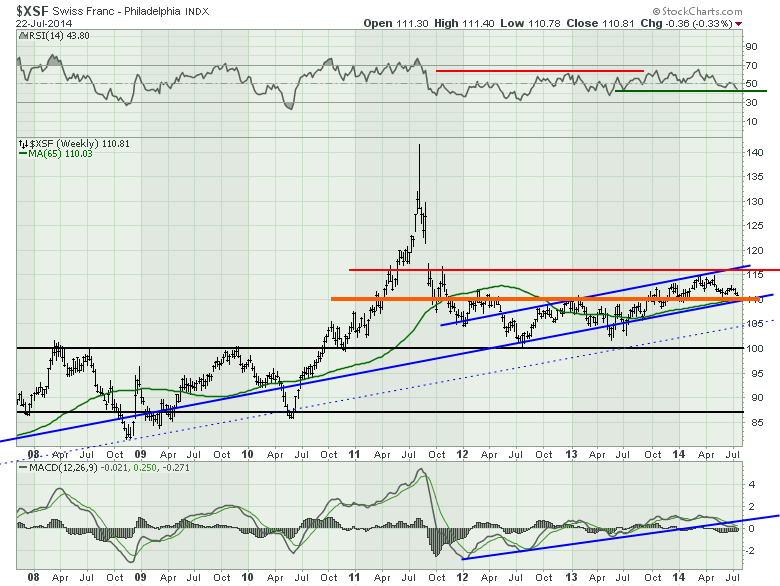 We can see the MACD didn't make a strong push above the zero line, but we are testing that zero line support right now. I would suggest the weekly chart points to a critical long term junction now. Onto the daily.

The Daily RSI has moved down to 30 so it is a bear market signal, but I place more emphasis on the weekly RSI. The bottom line is this does look weak after staying above the 40 level for the whole move up. The Head/Shoulders topping structure we see is an important trend change. The Orange line has been fine tuned up to the 111 level rather than the 110 on the weekly.  A break below the brown line or the 300 DMA would be very important and would also break the thick blue uptrend on the weekly. The test of 110 will be watched by many currency traders. Should that long term support fail to hold, the most probable level is the 100 level to look for next support based on the weekly above. 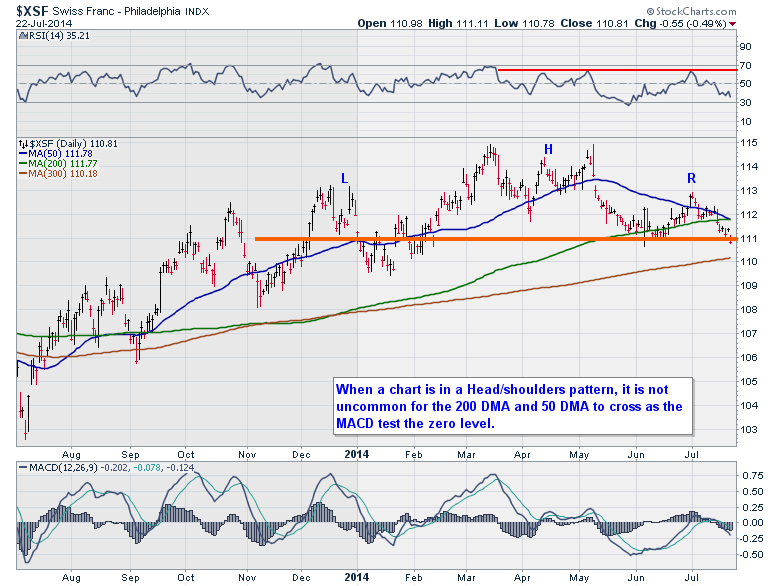 The MACD looks like it was unable to climb above zero in July. We'll watch closely to see what happens on the test of 110 but currently it looks bearish.

Another major currency ($XSF)  is at a critical chart level. Next we'll cover the Euro.

If you missed any of the other currencies like the Yen, the Aussie, The Canadian Dollar, The Swedish Krona,  or the British Pound,  you can find them by going to The Canadian Technician page by following this link.