Overbought and oversold are funny terms. Well, actually, they are not that funny when you really think about it. Overbought is often overused in an uptrend and oversold is over used in a downtrend. Let's focus on overbought because that seems to be the term du jour right now. First, overbought is a sign of strength because strong buying pressure is required to push momentum oscillators into overbought territory. Second, we often see multiple "overbought" readings in a strong uptrend, and these readings can extend for weeks or even months. I could go on, but I think Greg Morris summed up the overbought / oversold issue quite well in this article. 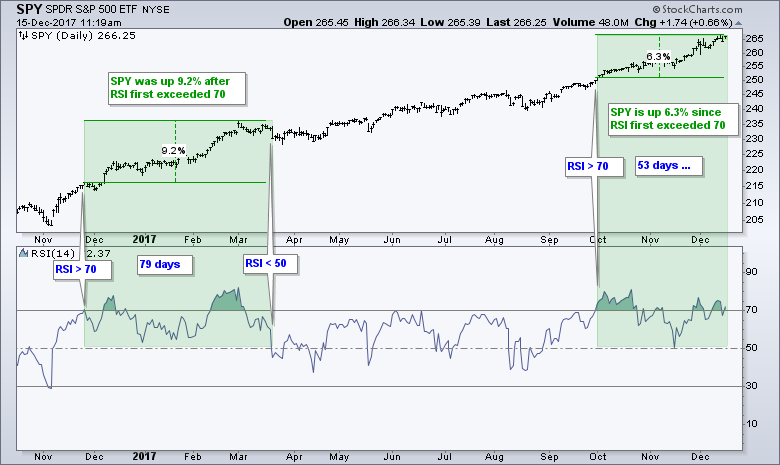 The chart above shows the S&P 500 SPDR (SPY) and 14-day RSI for a recent example. The shaded areas show when RSI first moved above 70 and then moved below 50. The November surge pushed RSI above 70 on November 25th. The ETF then added another 9.2% and RSI stayed above 50 until mid March (79 days). Most recently, RSI moved above 70 on October 2nd and the ETF has added another 6.3% since then. RSI touched the 50 level in mid November and then moved back above 70. It has been 53 days since RSI first moved above 70 and remained above 50. I would not expect a correction until RSI moves below 50. Even then, any weakness would be considered a mere correction within the bigger uptrend and this would just create the next opportunity to buy the dip.