In the oil business, rarely are huge new fields found as the geophysical technology gets better and better. Usually, oil exploration companies find smaller new plays, but the large ones are pretty well mapped. Every now and then, a surprise shows up. This week Apache announced a huge find. While there has been very little champagne flowing in the oilpatch lately, this find might have been big enough to crack a President's smile and get a little bubbly. 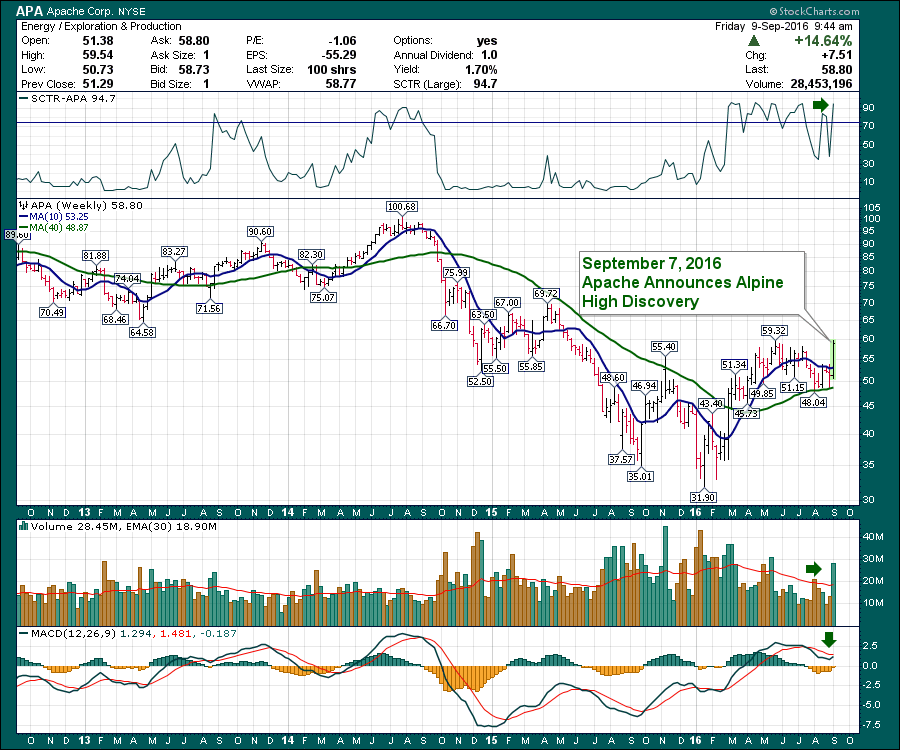 Just a little background on what it takes to pull this off. When you are drilling an exploration well, competitors are interested in your results. When a geologist gets a stunning well result, they immediately have to control the huge satisfaction of finding the big one to keep the results quiet. After a phone call back to the exploration manager, the VP and President are alerted to the success. But then comes the hard part. Keeping the whole thing quiet so you can acquire more land in the area.

If you announce the find for your shareholders right away, everyone who owns land on the neighbouring sections will drill the reservoir and you'll only get a smidgeon of the potential that your internal geology and geophysics departments mapped. So now it becomes a race against time, not unlike the DaVinci Code (without the murders!), to get to the neighbouring lands which hold more clues without letting the secret out.

The land department is setting up numbered companies and hiring individual land buyers to buy the acreage nearby. You need cash to buy the land, but the price of oil is plummeting so the company is squeezed on cash flow. The senior management team has to do layoffs in the middle of the biggest growth story for the company to keep the Wall Street analysts clueless. In a surreal twist, it really is a game of fooling Wall Street to become the elephant in the reservoir.

From the presentation, Apache acquired 182,000 acres in 2015 at rock bottom prices of $1300 / acre! From the CNBC article link above, land in other parts of Texas goes for $30,000 / acre. While Apache is a huge company, coming up with a spare $250 Million in the middle of collapsing oil prices was not easy without alerting some shareholder to the change in expense. 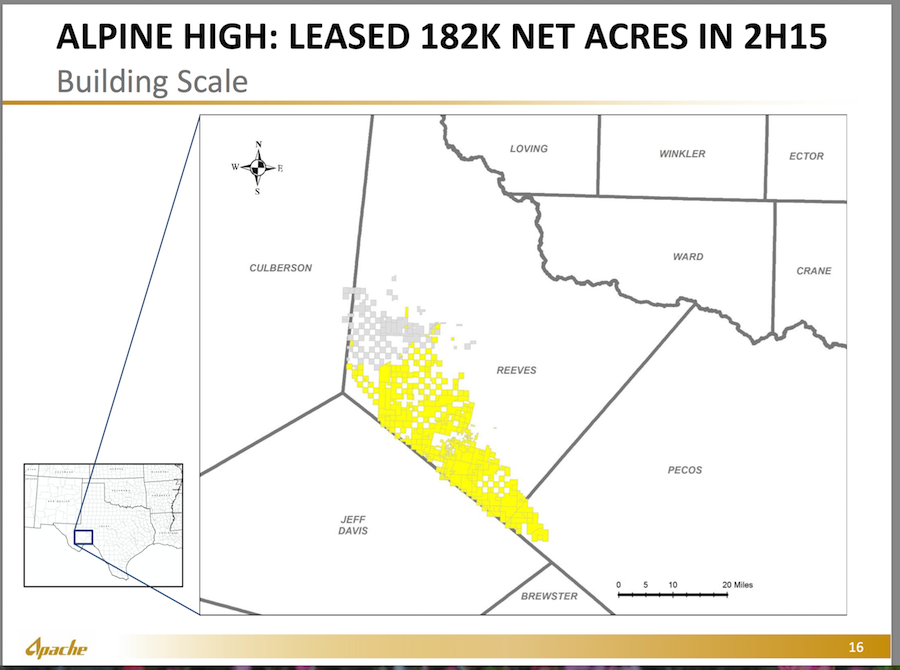 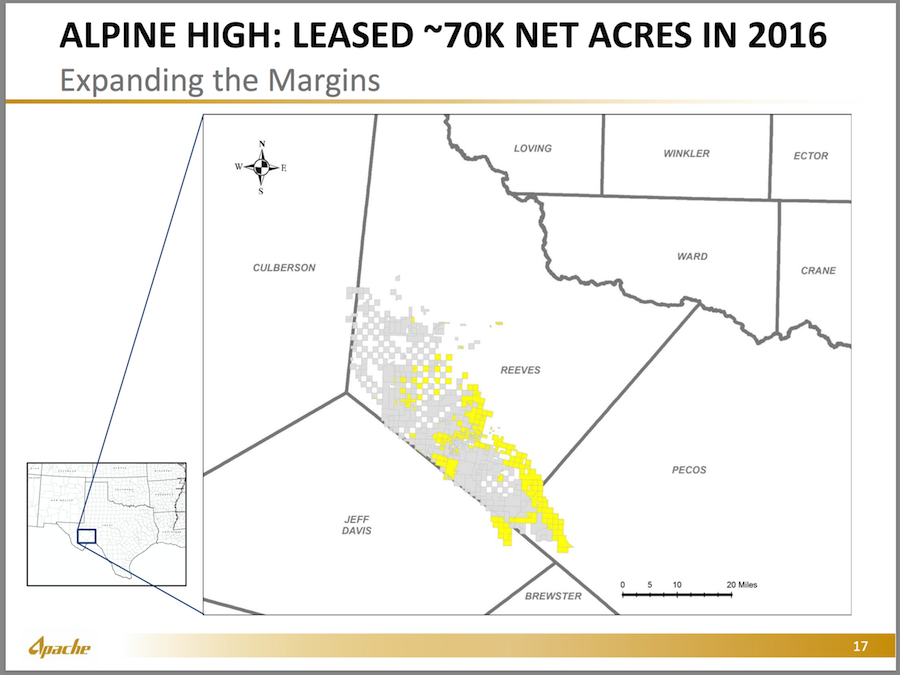 Here is the presentation link!

So, when they finally announced what they had found it looks to be huge. They'll only know how huge it will ultimately be as they drill it all out, but entire careers will be spent on this reservoir.

In the title of the article, I mentioned it reminds me of Caroline. When I worked At Shell Canada in the early 1990's they announced a massive well result that had the same situation. Everyone around them had drilled dry holes. Shell had an inspired Geologist that mapped the reservoir differently than more senior geologists in the industry had done. They did geological and geophysical research work on land they didn't own at the time. Shell leased the land to drill the well on and hit paydirt. They shut in the well like the result was a dry hole, pretending nothing had been found and went on a massive land acquisition. It became the largest new reservoir in Canada in 20 years surrounded by dry holes! Keep in mind that Canada has four times the reserves the USA has so finding the largest reservoir in 20 years was a very big deal. You can read about Patricia Lee, the Geologist at Shell, who found the reservoir by following this link. It is a great story, you'll enjoy the brief read. Shell Caroline.

You'll also notice if you click on the timeline above the article, Fracking was started in 1953! Perhaps next year, we'll celebrate the 65th anniversary of Fracking technology and how it brought low-cost energy to North America. Contrary to the news fantasy, Fracking is not a new technology. Horizontal drilling and staged Fracking were the major game-changers recently, but Fracking has been with us a long time.

This month, Chartcon 2016 is coming to you via live stream broadcast! Rather than have customers spend all the money to travel to the event, we have arranged for all the technicians to gather in one location and broadcast from there, saving you thousands of dollars. It should be a fantastic couple of days with a tight synopsis of the markets from an award winning Technical Analyst crew. You can register for this event for under $200 and have access to the recordings. Chartcon 2016.

Next, I will be presenting in person at Golden Gate University in September if you are in the area.

Feel free to pass this article on to friends and family. If you would like to receive future articles by email, click on the Yes button below. I do roughly one-two articles a week from each blog (Commodities Countdown, The Canadian Technician, Don't Ignore This Chart) so you need to subscribe to each one individually. I also do a couple of webinars each week and you can view those live or in our webinar archives. As a heads up, I'm on twitter @Schnellinvestor.

Thanks for taking the time to join me. If you would like to receive these 'interesting stock of the day' market-related emails in your inbox, click on the Yes button below.