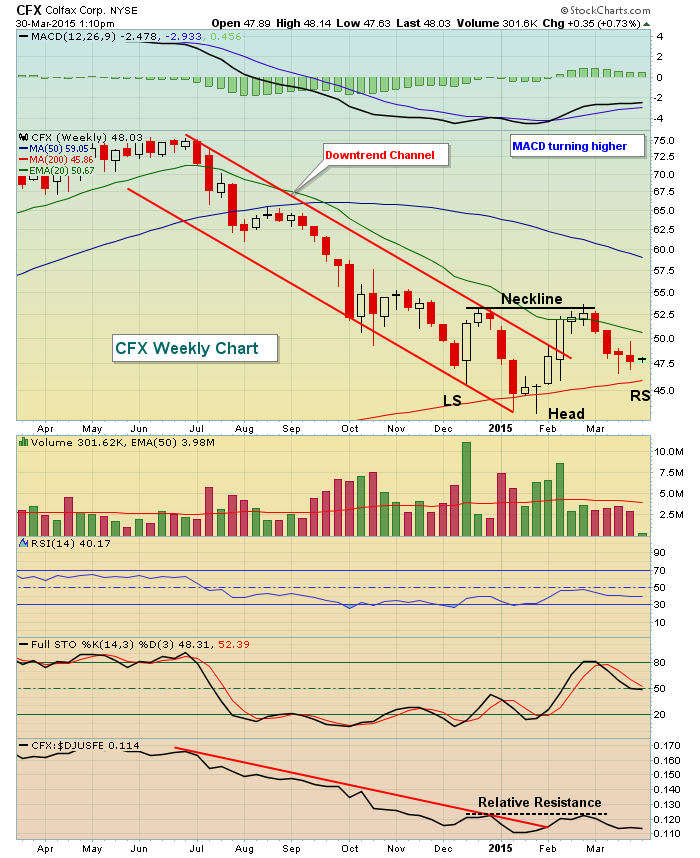 Industrial machinery ($DJUSFE) stocks have been consolidating in what some technicians might argue is a bullish inverse head & shoulders pattern. If the group does eventually see money rotate back into it, Colfax Corp (CFX) could be a direct beneficiary... Read More 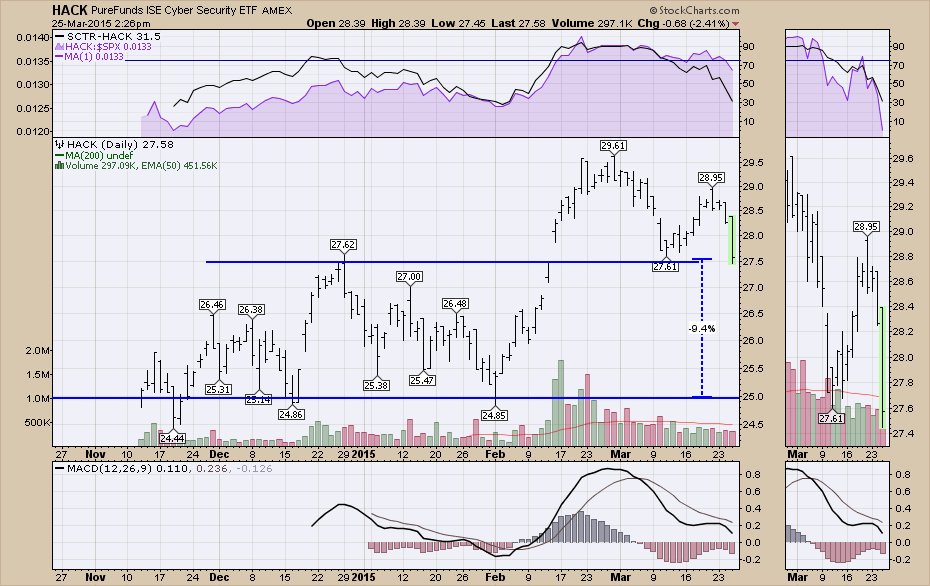 Do Cyber Security Hackers Pull Back? HACK Suffers A Pull Back

Cyber security is one of the fastest growing segments within the IT community. Recently, an ETF launched to help investors invest in a broad array of cyber security technologies. The cyber security ETF ticker symbol is HACK... Read More 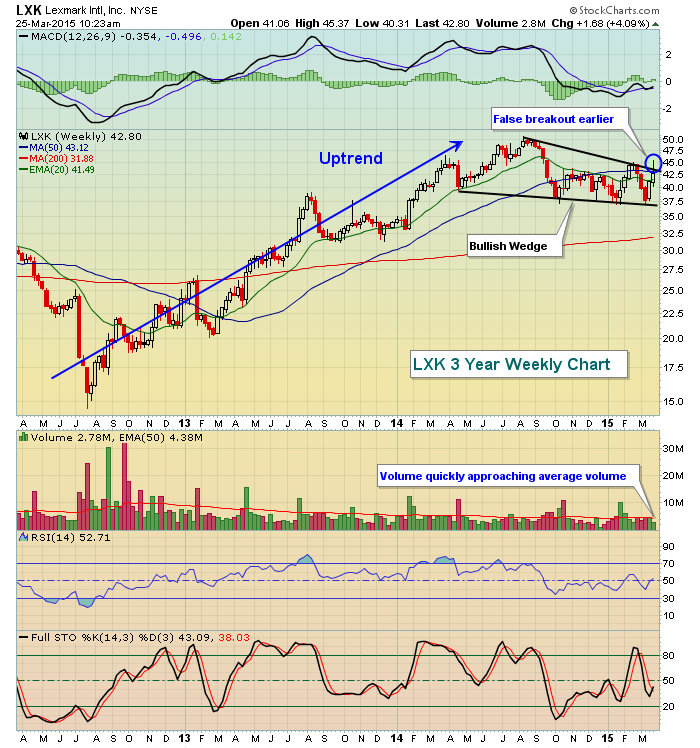 Lexmark (LXK) announced after the closing bell on Tuesday that it was acquiring enterprise software company Kofax (KFX) for $1 billion, its largest acquisition in its history... Read More 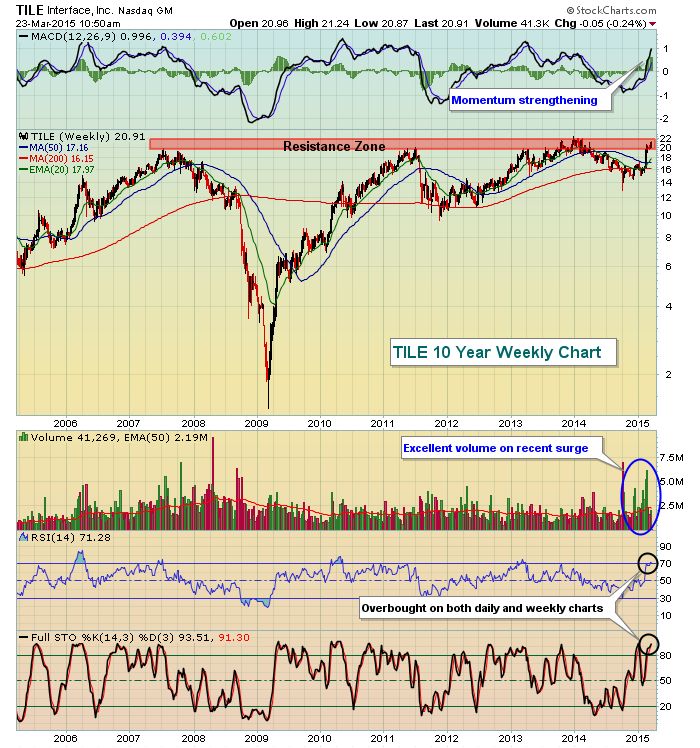 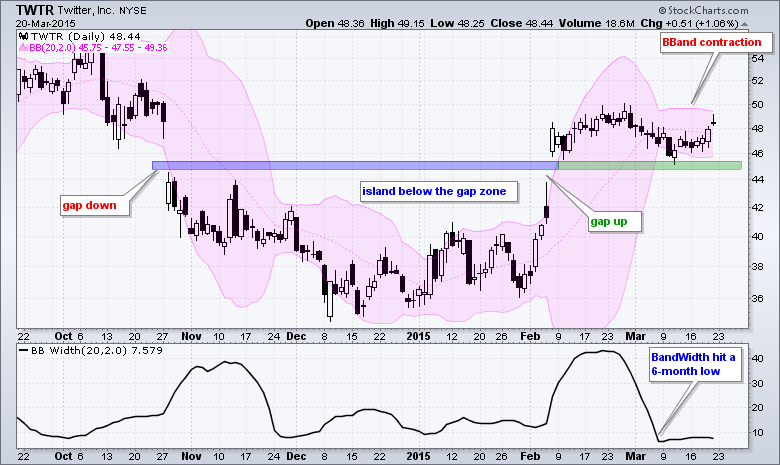 A Tweet-Worthy Island Reversal and Squeeze

Even though the pattern is a bit big, the gaps fit and it looks like Twitter (TWTR) traced out a large island reversal from late October to early February. The stock gapped below 45, traded below this gap for a few months and then gapped above 45... Read More 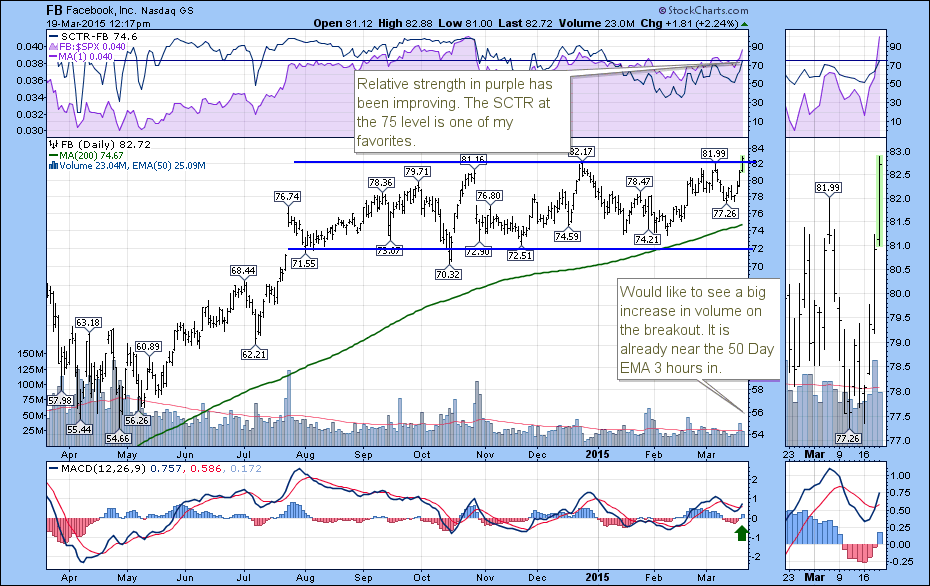 Facebook (FB) Breaks Out Above A Nine Month Consolidation

Facebook (FB) has been holding growth investors at bay for nine months. In a world where patience is added or removed, it's been part of the Facebook story for 3 seasons. As we roll into spring this weekend, Facebook is popping up like crocuses in the Netherlands... Read More 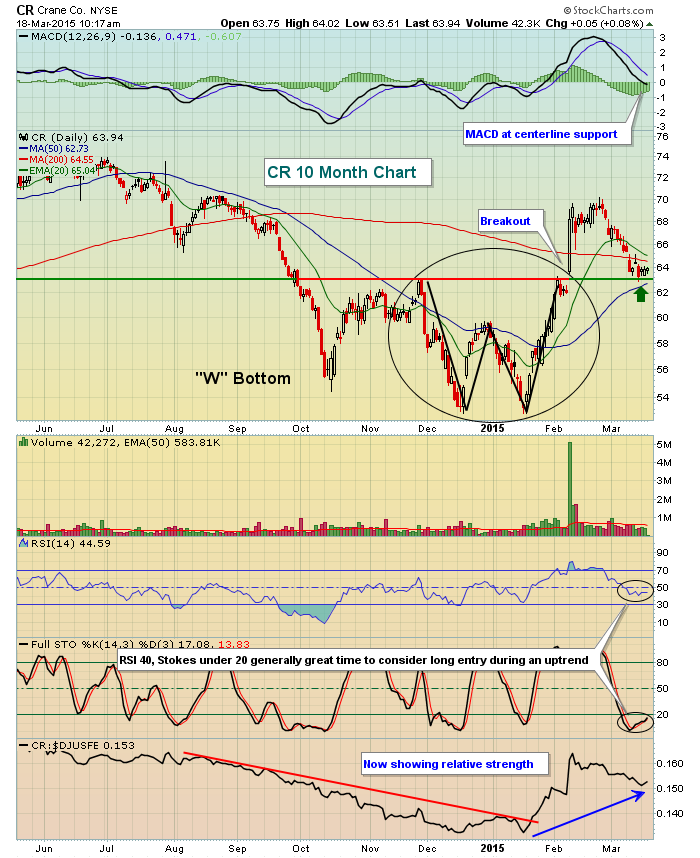 Crane (CR) is a part of the Industrial Machinery ($DJUSFE) space, which has been consolidating since last summer and is poised to break out once again... Read More 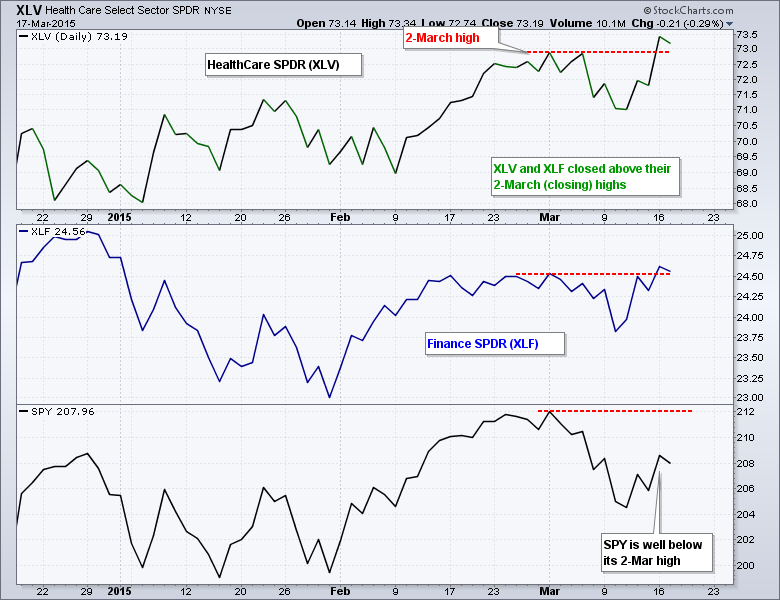 The Two Strongest Sectors in March Are.... 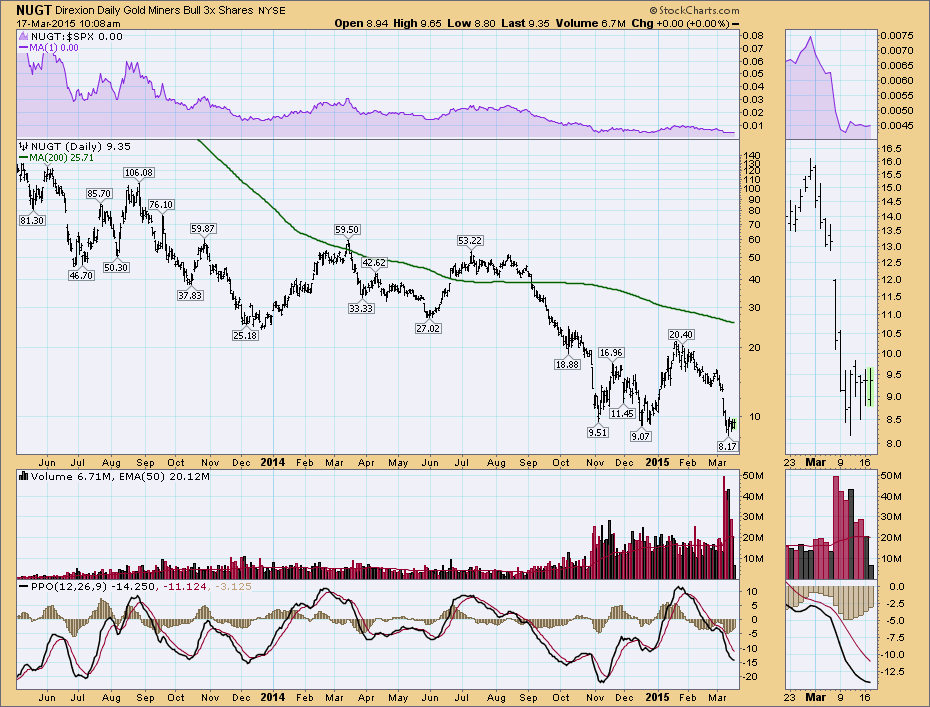 While we don't usually use triple ETF's for the 'Don't Ignore This Chart' blog, the clues on this NUGT chart are applicable to all gold traders. There are a certain group of traders that trade the 3x ETF's... Read More 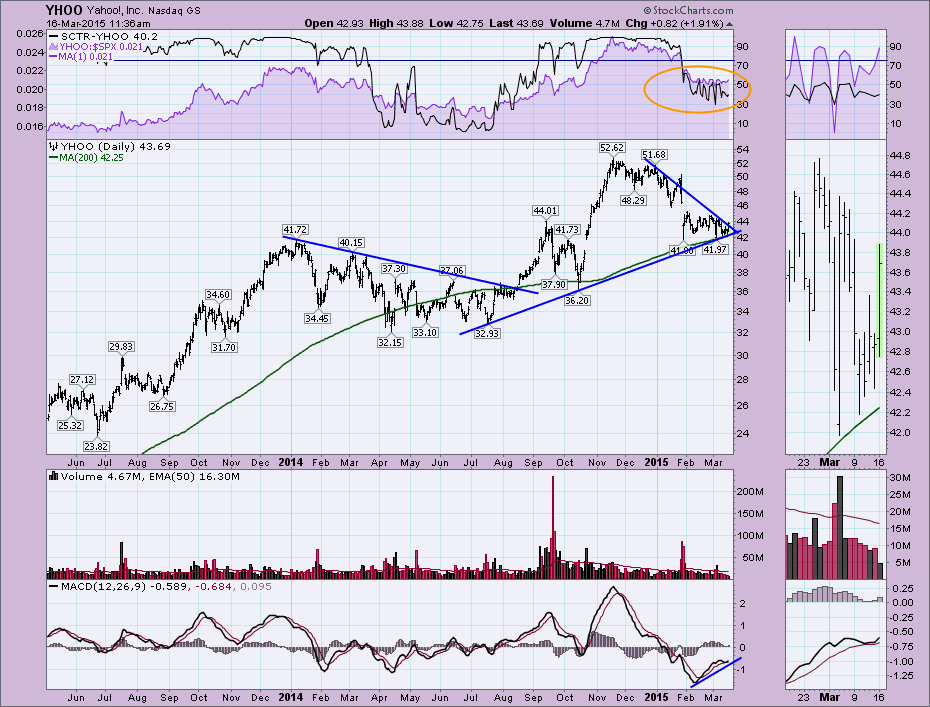 Yahoo (YHOO) Could Use A Little Yahooing

In Calgary, we use the word Yahoo way more often than the rest of the world. Our primary usage is during Stampede Week or The Greatest Outdoor Show On Earth... Read More 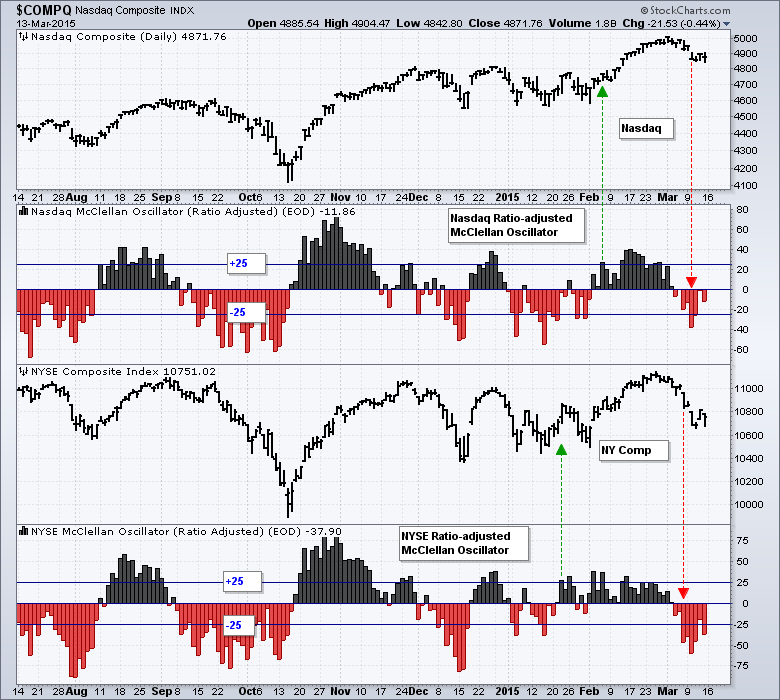 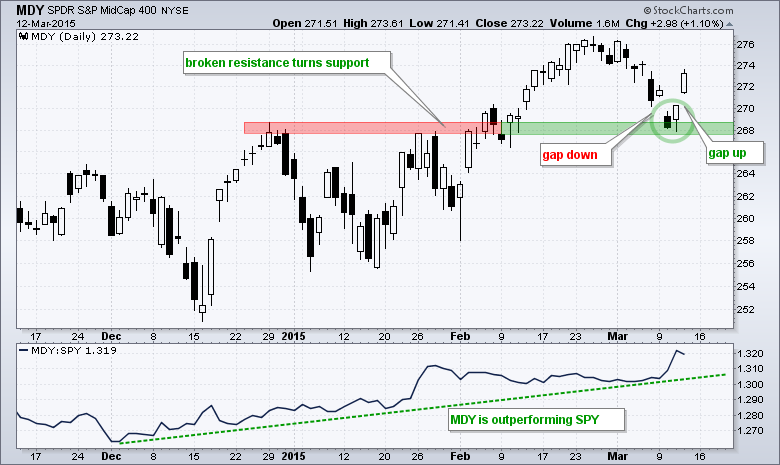 The S&P MidCap SPDR (MDY) fell to broken resistance with a gap down on Tuesday, firmed on Wednesday and gapped up on Thursday morning. The two gaps created a price "island" on Tuesday-Wednesday and an island reversal over the last four days... Read More 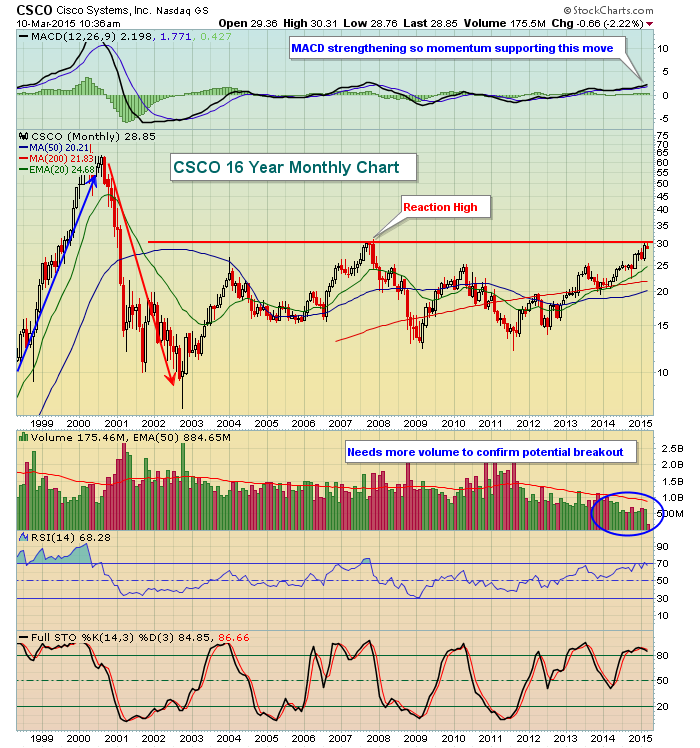 Since the tech bubble popped in the early 2000s, CSCO has slowly risen from the ashes. It fell a remarkable 90% from its high in 2000 to its low in late 2002. Keep in mind, however, that it made a parabolic move higher prior to this drop... Read More 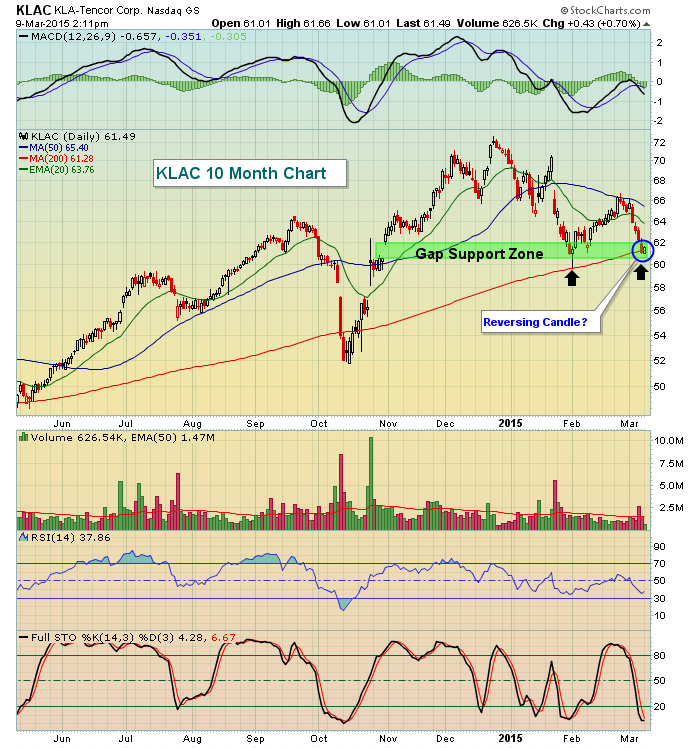 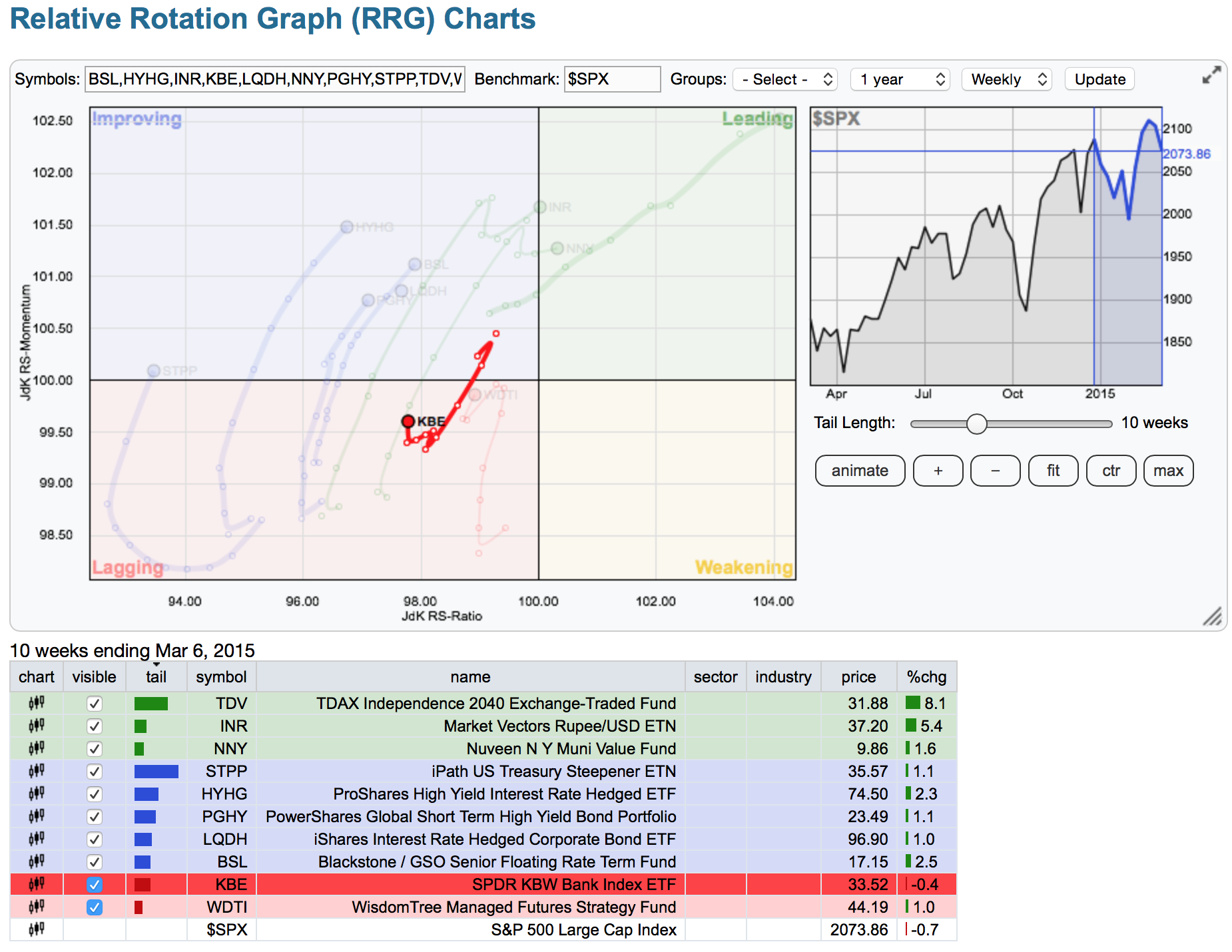 Yesterday on the webinar, I suggested we were at the make or break point for the change in interest rates. Today, the SCTR rankings for ETF's related to interest rates rising were all up big in a big down market... Read More 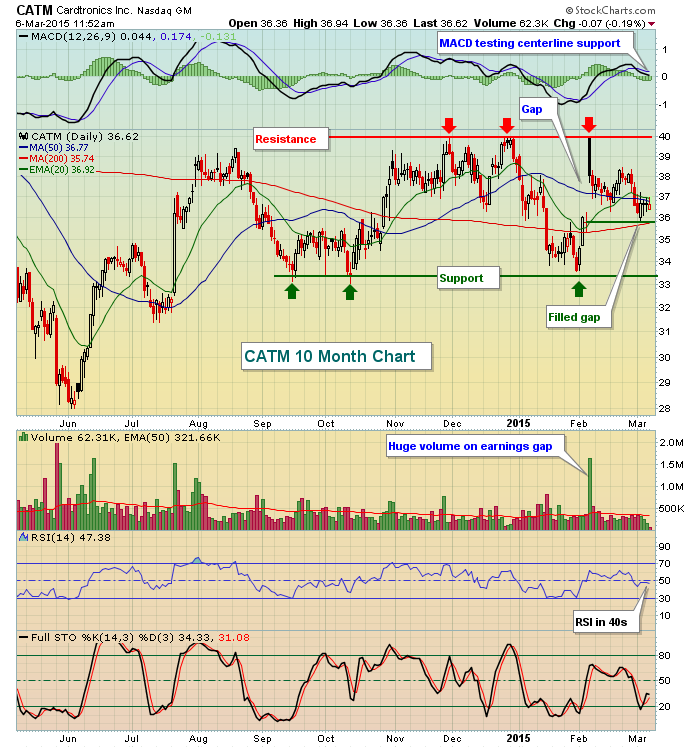 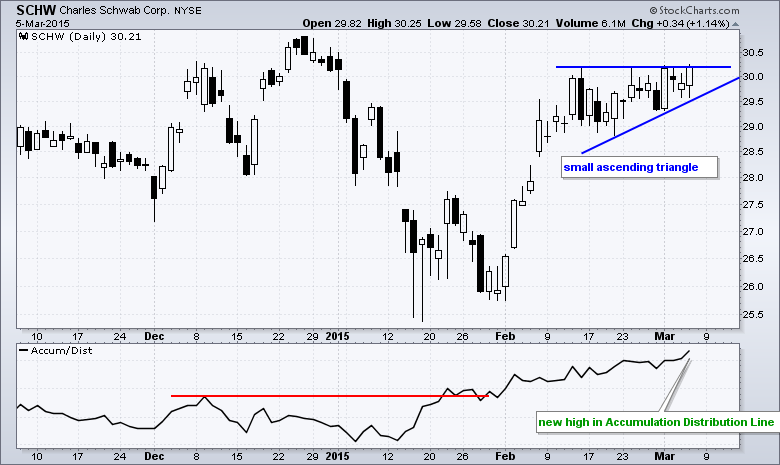 Schwab Goes for a Break as Volume Indicator Leads

Charles Schwab (SCHW) surged in February and then consolidated the last few weeks with an ascending triangle, which is a bullish continuation pattern. A breakout would signal a continuation of the prior advance and target a move to new highs... Read More 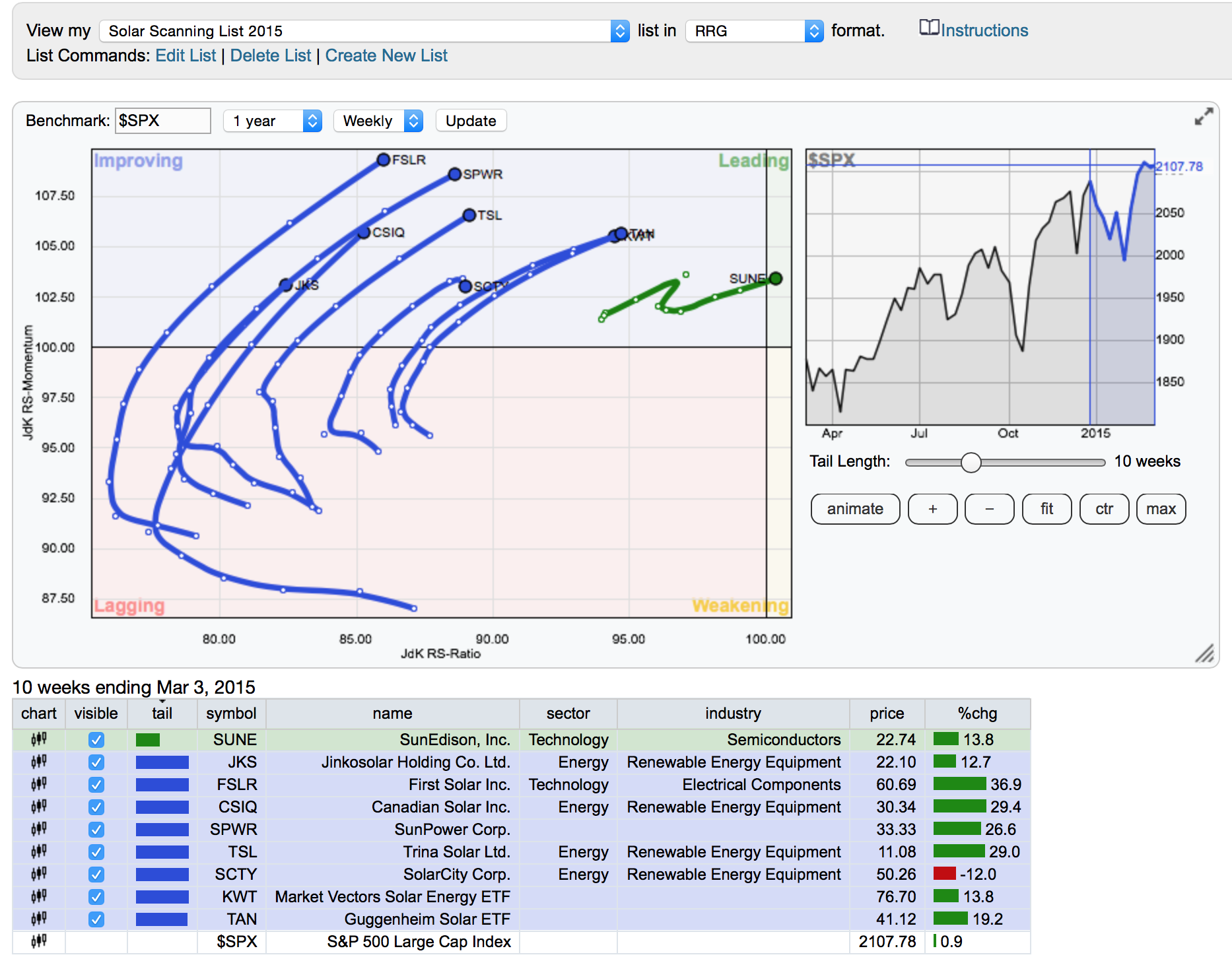 Solar Stocks Are Shining On The RRG

The RRG charts were introduced to StockCharts.com last year. They create such an interesting view of the markets. In December, we talked about the solar stocks being pulled back on the back of lower crude prices... Read More 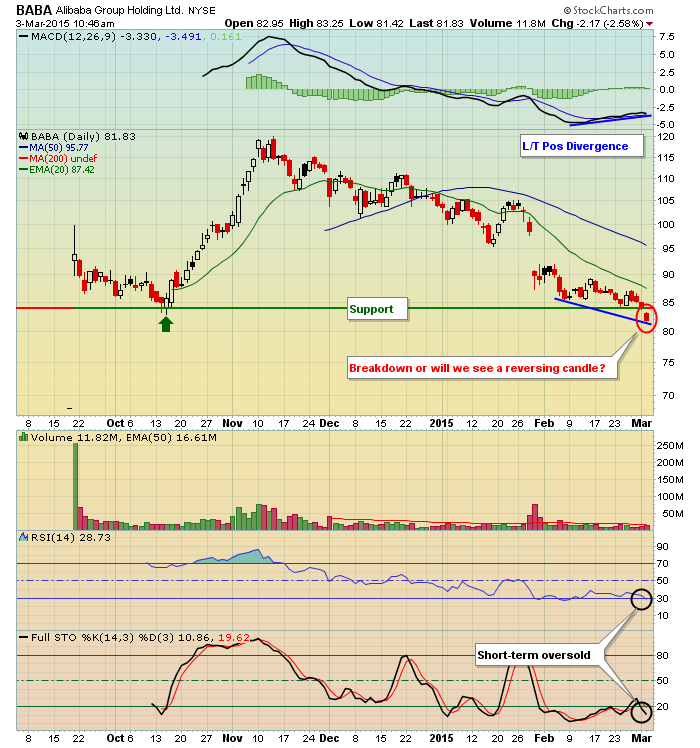 BABA: Breaking Down or Reversing With Positive Divergence?

On Monday, BABA closed at 84.00, its lowest close since its IPO in September. However, that close was very close to support and BABA is currently oversold with its RSI below 30 and its stochastic reading at 11... Read More 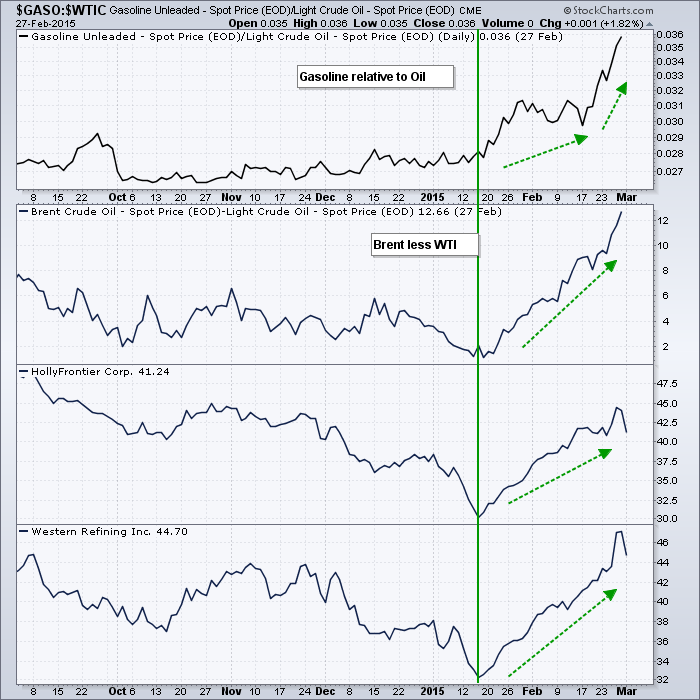